Despite ‘Ample Warning,’ U.S. Was Unprepared For Latest Surge Of Migrant Children 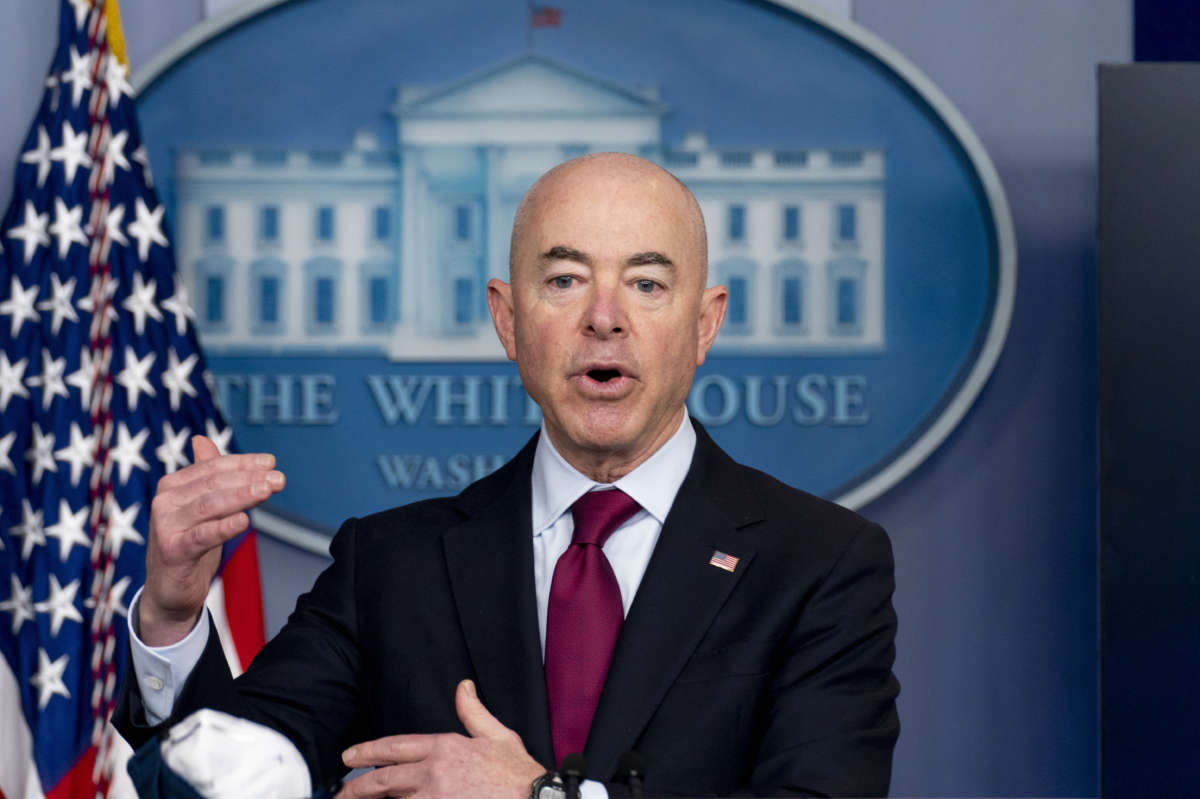 Homeland Security Secretary Alejandro Mayorkas addresses a press briefing this month. Mayorkas has tried to discourage migrants from coming north and blamed the Trump administration for dismantling the system that processes and cares for them.
Image credit: Andrew Harnik

President Biden’s administration is scrambling to deal with an increasingly difficult challenge on the Southwest border that’s become one of the first big political firestorms of his nascent presidency.

A growing number of migrants are arriving at the U.S.-Mexico border, many to seek asylum, and the government wasn’t prepared for a huge influx of children who are coming alone without their parents.

“Right now, what we’re seeing is just a volume that the federal government was unprepared to address despite ample warning that it was coming their way,” said Jennifer Nagda, policy director at the nonprofit Young Center for Immigrant Children’s Rights.

Over the weekend, the Biden administration announced a new shelter for migrant children in West Texas, part of the broader shelter system overseen by the Department of Health and Human Services that’s designed to care for young new arrivals.

And Homeland Security Secretary Alejandro Mayorkas capped a weeklong media blitz with appearances on four Sunday talk shows in which he tried to discourage migrants from coming north and blamed the Trump administration for dismantling the system that processes and cares for them.

“The message is quite clear: Do not come,” Mayorkas said in an interview on ABC’s This Week.

While the Biden administration still refuses to call the situation a crisis, Republican critics said that’s exactly what it is and that the president created it.

Critics say Biden has encouraged migrants to cross the border illegally by reversing a number of former President Donald Trump’s immigration policies: halting border wall construction, introducing ambitious immigration bills to expand pathways to citizenship, and ending the Remain in Mexico policy, which forced migrants to wait outside the United States for their asylum hearings.

“They have created this crisis of children coming in,” GOP Rep. Michael McCaul of Texas said in an interview Sunday on ABC. “The traffickers are smart, cartels are smart. They know our laws, policies. And this started right after the election. In the last two months, we’ve seen a real surge.”

Immigration authorities encountered more than 100,000 migrants attempting to cross the Southwest U.S. border in February. More than 14,000 migrant teens and children are now in U.S. custody, and more are likely on the way — overwhelming facilities at the border that were designed to hold adults.

“Kids are overcrowded. They’re in situations you would never want your kids to be in. It’s irresponsible,” Sen. Rob Portman, R-Ohio, said in an interview on CBS’ Face the Nation. Portman was part of a bipartisan group of lawmakers who toured a Border Patrol facility last week in El Paso, Texas.

By law, the young migrants are supposed to be turned over to HHS within three days. But in many cases, that’s not happening. Hundreds have been held in those jail-like facilities at the border for more than 10 days, according to a Department of Homeland Security document obtained by NPR.

Trump closed the border to most migrants because of the pandemic, and Mayorkas emphasizes that many migrants are still turned back under that policy. But now there are some exceptions: Migrant children are being allowed into the U.S., as are some asylum-seekers who had been enrolled in Remain in Mexico.

“It is taking time, and it is difficult,” Mayorkas said Sunday in an interview on CNN’s State of the Union. “There was a system in place, in both Republican and Democratic administrations, that was torn down during the Trump administration. And that is why the challenge is more acute than it ever has been before.”

This is not the first surge of migrant children arriving at the southern border. The same thing happened under Trump and former President Barack Obama, too. And in many ways, the current bottleneck was predictable.

The Trump administration dramatically reduced the size of the HHS shelter system, and immigrant advocates say the administration scared away relatives and parents in the U.S. — many of whom are undocumented — from coming forward to care for the children.

Contrary to longstanding practice, the Trump administration began to share information about potential sponsors for migrant children with immigration authorities. The Biden administration only recently reversed that policy.

And when Trump lost the election, Nagda from the Young Center for Immigrant Children’s Rights said his administration left the incoming Biden team in a lurch.

“There was no preparing in November, December and January; those were three critical lost months,” she told NPR in an interview.

Nagda said it’s been clear that more migrant children were coming since two hurricanes devastated Central America late last year. Meanwhile, thousands of migrant children had amassed in dangerous border towns in Mexico where the Trump administration had expelled them, and were desperate to get out.

“They are at risk in Mexico,” said Olivia Peña, a child advocate at the Young Center’s office in the Rio Grande Valley, where she works with migrant children after they’re released to HHS custody. “They’re waiting there hoping to come in as soon as possible.”

Advocates say the real tragedy was sending these kids and families who fled crime and poverty at home back to danger in Mexico.

Peña relays the story of one 9-year-old Honduran girl at a shelter in Texas. Her mother was stuck on the other side of the border under Trump’s Remain in Mexico policy. They were separated for months — until recently, when Biden ended the policy.

“Within a couple of days, she was released into her mother’s care. And that to us was a success,” Peña said. “We were so happy to know there’s change, and that there’s hope.”

But the administration’s critics fear that hope will spur even more migrant children to make the dangerous trip to the U.S. border.

“What they’re hearing is that you can now come into the United States, which you can as a kid,” Portman said on CBS. “And so they’re going to keep coming.”

Even some of Biden’s allies have questioned whether it’s wise for the U.S. to allow migrant children to enter if the country doesn’t have systems in place to care for them properly. Asked several times in media interviews if the Biden administration moved too quickly to lift Trump’s restrictions, Mayorkas on Sunday framed the issue as a moral imperative.