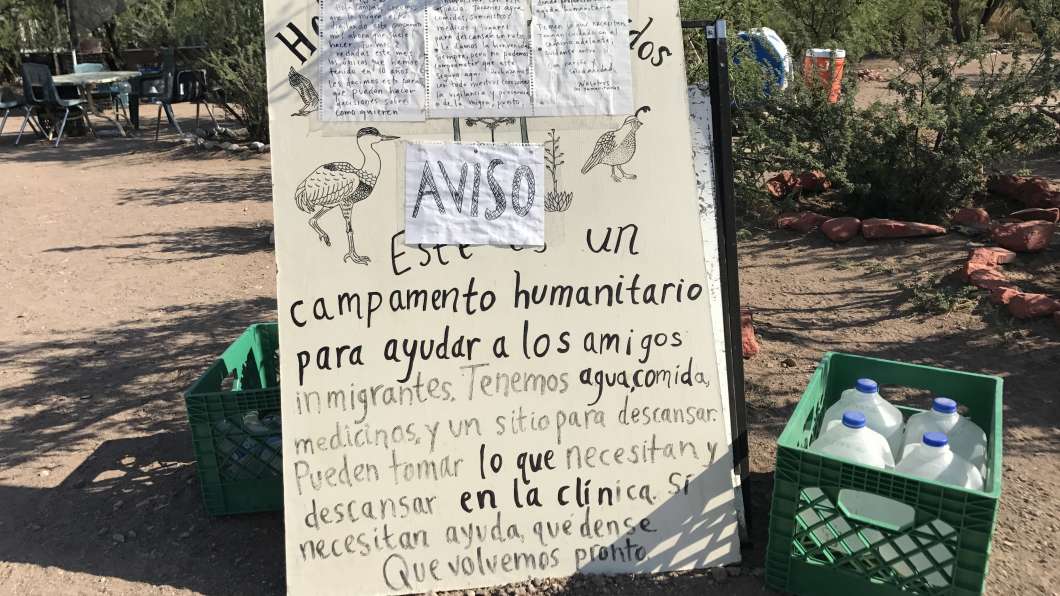 A sign outside the camp warns migrants that operations are closed for now.
Image credit: Kirk Siegler

In the sweltering Sonoran Desert along the U.S.-Mexico border in Arizona, a humanitarian group has decided to shut down operations for now at an aid camp for migrants who cross the border and need immediate medical help and water.

Aid workers say they can no longer guarantee a temporary shelter for migrants, after U.S. Border Patrol agents raided the camp and made arrests.

“Our clinic space being compromised will directly lead to more suffering and more death in this desert,” said aid worker Geena Jackson.

The camp, located about 15 miles as the crow files north of the Mexico border, is primitive. It’s a collection of makeshift shelters, water stations and a camper with a cell phone booster for emergency calls. Normally it would be busy.

Instead, on a recent Summer day, it’s eerily quiet. A handmade sign warns that the camp operations are closed for now.

Jackson steered a banged up Four Runner into a dusty driveway leading to her group’s aid camp, which many dehydrated and weary migrants stumble into. Jackson did a quick search to make sure there are no migrants sheltering in the tents. Her guard was up.

Jackson is a wilderness EMT and volunteer with No More Deaths, a coalition of community and faith groups working to save migrants and pushing for changes to immigration policy.

These hot summer months are some of the most dangerous — even deadly — times for migrants trying to cross the U.S. border. Aid workers say they found 13 bodies in the vicinity of the camp just in the past few weeks.

Many walk for miles around border towns and their walls and fences, trekking instead through the remote desert mountains.

Thing are more tense than normal after a series of incidents in the past month. The most publicized incident: agents used surveillance cameras to follow suspected drug smugglers into the camp.

They got a warrant to enter and made four arrests. This was a big deal. For the past decade, this place was mostly hands off, treated like a church or school.

“There’s an entire desert to do law enforcement, why are you targeting humanitarian aid?” Jackson asked.

The big question is whether this was an isolated incident, a chance for the Border Patrol to nab some drug smugglers, or something bigger, part of a shift toward targeting aid groups that help migrants who slip into the country unlawfully.

There’s “a lot of speculation” on what President Trump and his administration might do at the border, said Agent Daniel Hernandez of the Border Patrol’s Tucson sector. But, he says, his agency is just doing its job. as usual “We’re a law enforcement agency. No matter who the president is, we enforce the laws that are in the books.”

Hernandez says no policies have changed. The suspects were in the country illegally, and some had prior criminal records. He says the Border Patrol does not target humanitarian operations. But they’re no fans of the established camp either.

“Keeping somebody in a 105-degree camp 40 miles from a hospital when they’re in clear need of medical assistance,” he said, “is not the most humane way to treat somebody who might be injured or sick.”

One thing is clear, the Border Patrol is beefing up its public presence here in southern Arizona. The Border Patrol plans to hire more than 4,000 new agents nationally, with many expected to go the Tucson sector.

A few miles from the No More Deaths humanitarian camp, a country highway in the small town of Arivaca is packed with green and white Border Patrol pickups.

It’s a new sight that residents seem to take in stride. Rusty Kunkle, closing up a taco stand for the afternoon, said he’d heard about the camp raid, but didn’t know that aid workers had begun discouraging migrants from stopping there.

“You know, Border Patrol [gets] carried away,” he said. “I don’t see them people doing nothing wrong, besides just trying to help somebody that’s crossing the desert you know.”

Across the road, at the town’s only grocery store, a customer shrugs off all the new truck traffic, saying that at least the agents are there to deter the border-crossers, especially in this heat.

Back at the camp, Geena Jackson and other volunteers are trying to figure out how best to move forward. For now, they say they may use this camp just as an aid distribution base.