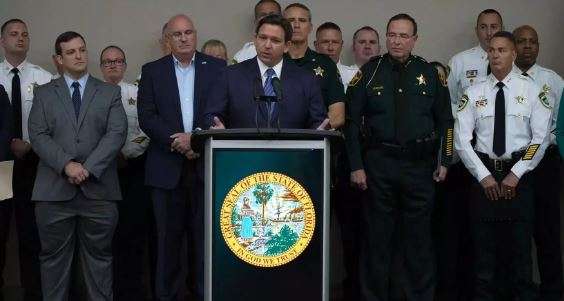 Gov. Ron DeSantis suspended State Attorney Andrew Warren on Aug. 4, 2022, pointing to comments Warren has made that he would not enforce any current or potential state laws regarding abortion or transgender health care. (photo: Gov. Ron DeSantis/Facebook)

Gov. Ron DeSantis announced the suspension at the Hillborough County Sheriff’s Office, saying Warren has indicated he would not enforce any current or potential state laws regarding abortion or transgender health care.

DeSantis was surrounded by law enforcement officials during a news conference at the Hillsborough County Sheriff’s Office when he made the announcement.

He pointed to Warren’s statement that he would not enforce any current or potential state laws regarding abortion or transgender health care, as one of the reasons for the suspension.

Warren, a Democrat, was one of dozens of state attorneys around the country who signed a letter vowing not to press charges against people who seek or provide abortions. He has called Florida’s 15-week ban “arbitrary” and “unconstitutional.”

“It is not for him to put himself above that and say that he’s not going to enforce the laws,” DeSantis said. “We don’t elect people in one part of the state to have veto power over what the entire state decides on these important issues.”

According to an executive order issued by DeSantis, Warren “thinks he has the authority to defy the Florida Legislature and nullify in his jurisdiction criminal laws with which he disagrees.”

“State Attorneys have a duty to prosecute crimes as defined in Florida law, not to pick and choose which laws to enforce based on his personal agenda,” DeSantis said in a news release. “It is my duty to hold Florida’s elected officials to the highest standards for the people of Florida.”

The order also cites Warren proclaiming “in writing that he will not prosecute individuals who provide abortions in violation of Florida’s criminal laws to protect the life of the unborn child.”

Andrew Warren responded with a statement, calling the suspension a “political stunt” and “illegal overreach that continues a dangerous pattern by Ron DeSantis of using his office to further his own political ambition.”

“It spits in the face of the voters of Hillsborough County who have twice elected me to serve them, not Ron DeSantis,” Warren said.

“In our community, crime is low, our Constitutional rights—including the right to privacy—are being upheld, and the people have the right to elect their own leaders—not have them dictated by an aspiring presidential candidate who has shown time and again he feels accountable to no one.

Just because the governor violates your rights, it doesn’t mean they don’t exist.”

DeSantis appointed Susan Lopez, a Hillsborough County judge since 2021, to serve as state attorney for the 13th Judicial Circuit while Warren serves his suspension.

“I have the utmost trust that Judge Susan Lopez will lead the office through this transition and faithfully uphold the rule of law,” DeSantis said in the release.

Under the state constitution, DeSantis has the authority to suspend state officials “for reasons of misfeasance, malfeasance, neglect of duty, drunkenness, incompetence, permanent inability to perform official duties, or commission of a felony,” according to the release.

DeSantis didn’t say how long the suspension will run.