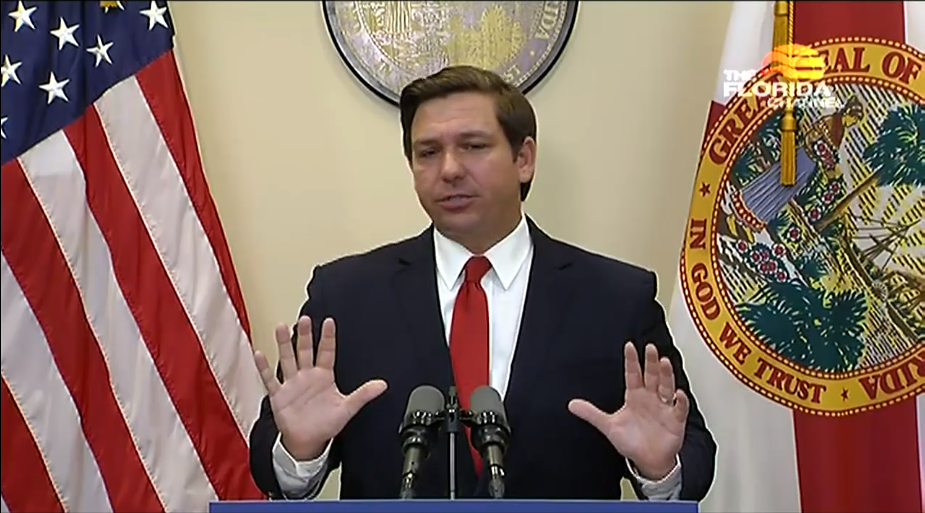 The proposal is about $400 million over the current Florida spending plan. One of the largest increases in the proposal is $600 million to raise the minimum salary for public school teachers to $47,500. DeSantis said that means 101,000 teachers would see a pay increase.

It also includes a $1 million boost to hunt down and remove pythons that have overrun the Everglades.

“We are upping the investment to help eradicate the Burmese python out of the Everglades,” DeSantis said. “That’s been a problem for a number of years. The efforts have been stepped up recently. We want to go ever further and get that done.”

DeSantis has enjoyed high approval ratings since taken office in January, in part because he’s gone far beyond his predecessor, Republican U.S. Sen. Rick Scott, in pushing environmental issues. While Scott was a climate change skeptic, DeSantis has said it’s one of the low-lying coastal state’s top concerns.

DeSantis said he wants to spend $625 million a year for the next three years on environmental projects.

DeSantis said the state could afford such big-ticket proposals, though state analysts have warned of a slowing economy.

“It’s great to have bold ideas and to do that, but we live in the realm of what is possible,” DeSantis said to reporters Monday morning. “I think all the stuff we are laying out is doable and possible and I think it’ll make a real impact with the state of Florida.”

DeSantis is also proposing creating 549 new state jobs, mostly for the Department of Corrections and to staff new nursing homes for veterans.

“The total top line recommendation is actually a decrease in per capita spending,” DeSantis said, noting the state’s population growth over the year. “The initiatives we’re doing, I think are bold, I think they’ll be very meaningful. That’s all taking place within a context of a budget that’s very, very healthy.”

The proposal is simply a recommendation, and the state’s spending plan will largely be shaped by the Legislature after it begins its session Jan. 14. Once lawmakers present him with a budget, DeSantis will be able to veto individual items.

“Governor DeSantis’ budget recommendations reflect many priorities my Senate colleagues and I share. We very much appreciate the Governor submitting these recommendations nearly a month in advance of the deadline,” Republican Senate President Bill Galvano said in a news release. “In the coming days and weeks, we will evaluate the Governor’s budget in more detail.”

DeSantis made it a point to highlight his proposals on school spending, including $75 million to help make schools more secure. That’s $25 million more than what’s in the current budget.

And while his proposal creates more state jobs, he’s also recommending 141 be eliminated, nearly all of which are vacant. The positions are from a variety of government agencies.

While DeSantis wants $300 million for teacher and principal bonuses on top of raising teachers’ minimum salary, he isn’t proposing across the board raises for state workers.

“The Governor’s budget recommendations are most encouraging. He is to be commended for a strict adherence to fiscal restraint,” Republican House Speaker Jose Oliva said through a spokesman. “While the details of his ambitious teacher-pay program remain obscure — not a small matter — his commitment to responsible spending is crystal clear.”