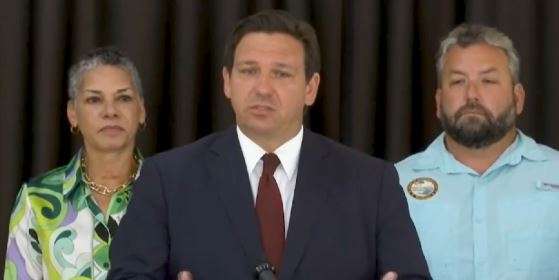 Governor Ron DeSantis announced a new executive order, July 8, aimed at adding transparency to the role of pharmacy benefit managers in administering prescription drug programs, that he says may be contributing to increasing medication costs.

At a press conference in Cape Coral, DeSantis also said the state could wind up in a legal battle with the U.S. Food and Drug Administration over the federal government’s delay in approving Florida’s Canadian drug importation program.

The order requires state agencies to review their contracts with PBMs to ensure that their costs are justified. DeSantis says the executive order also aims to curb what’s known as spread pricing and claw backs.

“Spread pricing is a deceptive practice where PBMs collect payment from the individual and keep leftover funds after they’ve already reimbursed the pharmacy for the prescription and the service cost. The practice essentially adds a middle man and that practice drives up the cost for everyday Floridians,” said DeSantis.

“Claw backs occur when an individual overpays for their prescription and the PBMs keep the overpayment as a financial bonus.”

An audit commissioned by the Florida Agency for Health Care Administration (AHCA) shows that PBM prescription drug markup activity, including spread costs and administrative and other fees, cost the state’s Medicaid system more than $113 million dollars in 2020 alone.

Meanwhile, a bipartisan bill called the Pharmacy Benefit Manager Transparency Act of 2022 was recently introduced in the U.S. Senate that also aims to prohibit spread pricing and claw backs by PBMs.

Governor DeSantis also took aim at the federal government over ongoing delays in approving Florida’s request to enact a plan to import cheaper prescription medications from Canada. In 2019, DeSantis signed a drug importation program into law which would save Floridians an estimated $80 to $150 million dollars in medication costs.

The plan was approved by both President Biden and former President Trump, but the FDA has yet to green-light it. AHCA Secretary Simone Marstiller said the state has made a Freedom of Information Act (FOIA) request to get to the bottom of the delay.

“Even when we’ve asked for particulars, we’ve been met with resistance and we’ve been promised follow-ups that we’ve never gotten,” said Marstiller.

“So basically, we’ve gotten zero commitment from the FDA to get this done, notwithstanding their boss President Biden’s directive to work with the states to get it done. That’s why we’ve filed the FOIA request so we can find out exactly what’s going on.”

Marstiller said the FDA has already indicated they may not be able to meet a 20-day deadline for the FOIA request. DeSantis said he’s determined, as Florida has already set up a warehouse in Polk County to facilitate the drug importation program.

“We’re still in this fight. We may even end up in litigation over this potentially, but we were happy to lead the way. Other states like Colorado and others have also wanted to do this as well,” said DeSantis.

DeSantis also took a shot at the Biden administration in suggesting the delay could be politically motivated. “Now maybe they just don’t want to give Florida a win and that wouldn’t be surprising, knowing what they’re doing,” said DeSantis.

The governor has previously said AHCA could begin importing prescription drugs from Canada within 90 days, once the program gets federal approval.