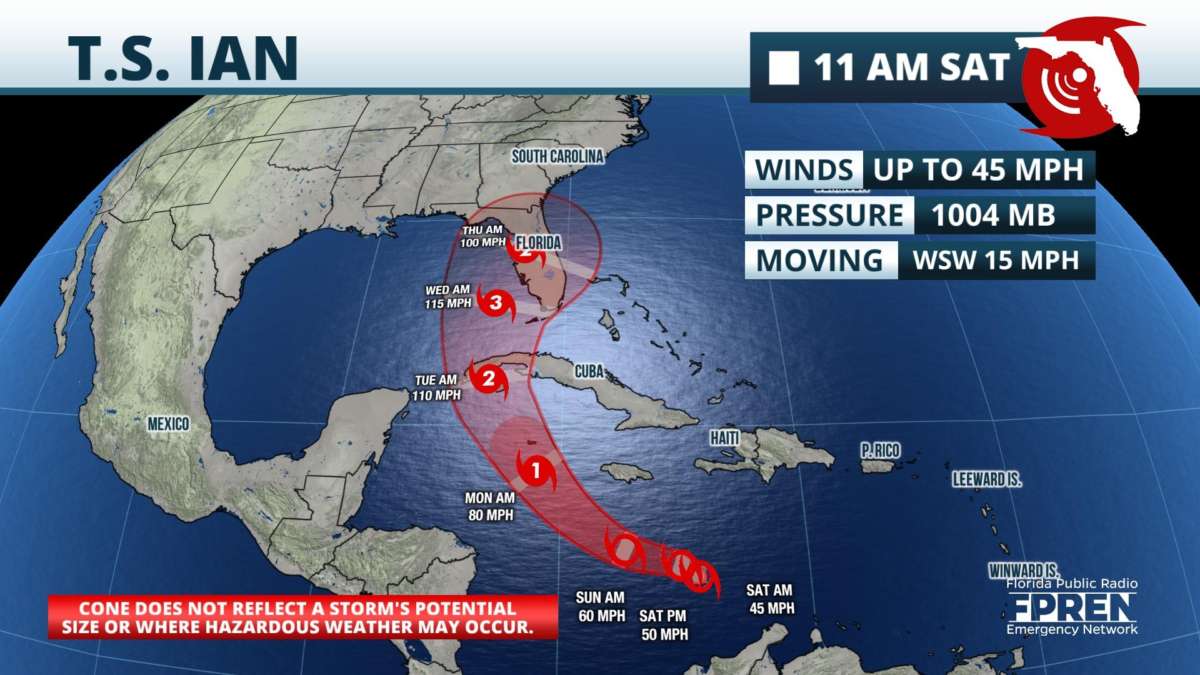 (Updated 1:30 p.m. Saturday) Gov. Ron DeSantis has declared a statewide state of emergency, expanding an executive order issued Friday, as Tropical Storm Ian is forecast to hit the west coast of Florida as a hurricane next week.

The National Hurricane Center forecasts that Ian will strengthen quickly this weekend and could make landfall on the coast somewhere between Naples and Destin on Wednesday or Thursday.

The NHC’s five-day forecast track puts the centerline off the coast of Citrus County at 8 a.m. on Thursday. Tropical storm force winds would most likely reach Central Florida on Wednesday.

(Original article) Tropical Storm Ian formed over the southeastern Caribbean Sea late Friday night. The storm is forecasted to strengthen over the next few days as it tracks northwestward toward the Southern Gulf of Mexico, and although the exact track of Ian is uncertain, impacts are expected along Florida’s Gulf Coast.

As of 11 AM Saturday morning, Ian remained weak tropical storm with sustained winds of 45 miles per hour. The center of the system was 300 miles south-southeast of Kingston, Jamaica and forward speed was west-southwestward at 15 miles an hour. The updated forecast cone from the National Hurricane Center projects that Ian should begin shifting on a northwestward track by early Sunday, before following a northward track early next week. During this timeframe, intensification is expected, and Ian is projected to become a hurricane sometime on Monday, and potentially a major category 3 storm (with winds greater than or equal to 130 miles on hour) on Tuesday or Wednesday. Florida’s entire landmass east of Apalachicola is within the forecast cone of uncertainty: This means that there is a possibility that Ian’s center could pass over any region within the cone (See this link for more on the NHC forecast

As of the latest model guidance, the best estimates for time of arrival of tropical storm force winds are as follows:

North Florida and the Panhandle: 2 AM Wednesday

** This forecast is for onset of tropical storm force winds, ahead of the center of the storm**

Fluctuations in track and intensity guidance have already occurred and will continue over the next several days. Details, such as potential landfall location, timing of impacts, and intensity of impacts will not become more clear until early next week. Although uncertainty persists, residents along Florida’s entire Gulf Coast should prepare for potential impacts from Ian. Preparation guidelines and tips can be found at floridadisaster.org and and ready.gov.