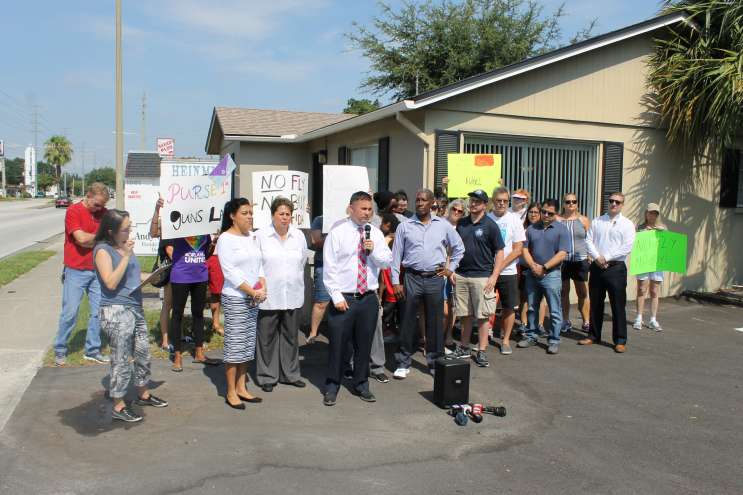 A group of demonstrators marched through Orlando Tuesday calling for action on gun control legislation.

She said they want a special session to discuss a ‘no fly- no buy’ law that would stop gun sales to people on the FBI’s no- fly list or other watch lists.

“We reached out to every representative that covered this district, and the people who arrived were the people who decided they would like to speak,” said Levy.

“We asked him if he would like to come out and address us. We were denied.”

Gardiner’s office told the demonstrators he wasn’t available, but promised to get back to them on the issue.

“I don’t think this is really a partisan issue,” said Rollings.

“I think it’s gotten to the point where what we’re asking for today, those are pretty basic things. It’s not about taking anybody’s guns away.”

Demonstrators ended their march outside the office of Republican State Rep. Mike Miller, across the street from the Orlando Regional Medical Center.

Miller was not available to speak to the marchers either.

Sen. Gardiner’s office released a statement saying he will vote against a special session.

The merits of restricting the ability of people on the no fly, or terror watch list from purchasing firearms deserves a full vetting to ensure the constitutional rights of all Americans are protected. The fact remains that absent federal action, Florida cannot pass a law to require the federal government to turn over sensitive information regarding investigations of terrorism. I too am frustrated with the partisan bickering that so often paralyses Washington, but the fact remains that a special session of the Florida Legislature cannot take the place of leadership in Washington.

Given the facts before me and the absence of a viable legislative proposal, I will not support turning the Senate floor in to a campaign stop for those seeking higher office.