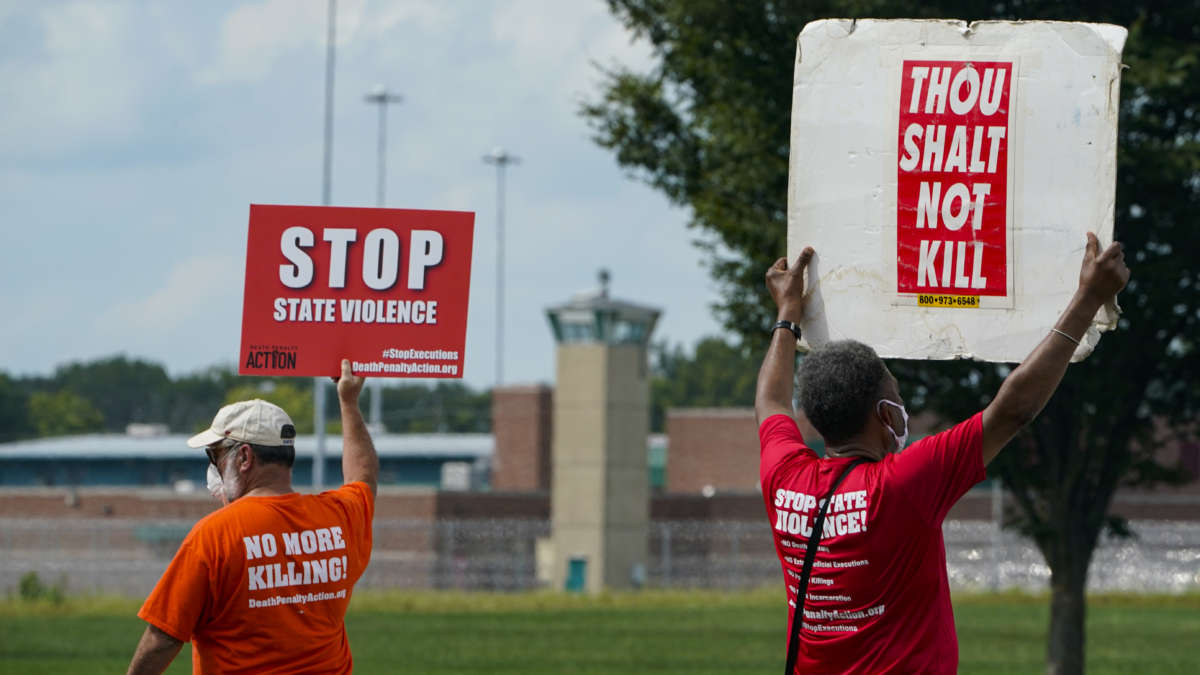 Protesters gather near the federal prison complex in Terre Haute, Ind., in August ahead of the scheduled execution of Keith Dwayne Nelson, who was convicted of kidnapping, raping and murdering at 10-year-old Kansas girl. Democrats are pushing new legislation to outlaw federal executions.
Image credit: Michael Conroy

Sen. Dick Durbin, D-Illinois, the incoming chair of the Senate Judiciary Committee, and Rep. Ayanna Pressley, D-Mass., are unveiling legislation that would seek to end federal capital punishment, putting a focus on the issue as their party prepares to take over complete control of Congress, along with the White House.

The Democratic proposal, shared first with NPR, comes as the party will have unified control of Congress after victories in two Georgia Senate races, a change in fortunes for Democratic legislative priorities. The legislation would end capital punishment at the federal level and require the resentencing of all federal inmates on death row.

“There are three lives that hang in the balance this week alone,” Pressley said, speaking along with Durbin in an exclusive joint interview. “And this is why we reintroduced this bill this week and are urging Congress to act immediately to pass it. State-sanctioned murder is not justice.”

Former Attorney General William Barr announced in July 2019 that the Justice Department would resume federal executions, ending what had been a nearly two-decade hiatus. At the time, Barr and Justice Department officials said they were carrying out the will of judges and juries and providing justice for “staggeringly brutal murders.”

The federal government executed 10 prisoners last year, more civilian prisoners than all the states combined over the same period. And more executions are scheduled for the final days of the Trump administration before President-elect Joe Biden takes office.

“Here we are in the closing hours of the Trump administration, when they are in a mad dash to give pardons for federal crimes committed by their friends, and an equally mad dash to try to execute these people who have been on death row for years, if not decades,” said Durbin, who will take over as chairman of the Senate Judiciary Committee in the coming weeks. “That is just unconscionable.”

For his part, Biden has said he wants to work with Congress to pass a law to eliminate capital punishment at the federal level and to “incentivize” states to follow that example.

Last year, transition spokesman T.J. Ducklo told NPR that “the president-elect opposes the death penalty, now and in the future, and as president will work to end its use.”

Pressley said she has been in “active conversation” with the Biden-Harris transition team about the issue, and that she is “very optimistic” about the chances for passage of the legislation. Late last year, she led her colleagues in a letter to the incoming administration, calling on it to abolish the death penalty as well as to use executive action to end all federal executions.

“I’m calling on him to use that full authority with the stroke of a pen to halt all federal executions and save lives,” Pressley said. “He should also require the Department of Justice to no longer seek the death penalty for future cases, and permanently dismantle the Terre Haute facility where those federal executions take place.”

But ultimately, Pressley said, passing the legislation is critical so that the end of capital punishment at the federal level has the force of law, preventing a future president from reinstating it.

Give that the Senate will be divided 50-50, with Vice President-elect Kamala Harris as the tiebreaker, there will still be partisan hurdles to cross. It is unclear whether such a proposal would garner support among House and Senate Republicans.

Durbin said that the Senate will still take up a broader criminal justice reform package.

“The Senate Judiciary Committee, throughout our modern history, has always played a leadership role on issues of the moment,” Durbin said. “It really was the focal point of a national conversation on issues of justice. It unfortunately, in the last few years abandoned that role.”

Durbin added that he hopes that as chairman, “we can restore the role of this committee in the new Congress on a bipartisan basis.”

Pressley said she believes there was a “very significant flashpoint” in the debate over capital punishment when the Justice Department proceeded last month with the execution of Brandon Bernard. Bernard spent more than half of his life on death row for a crime committed when he was 18. In the final days of his life, he pleaded with President Trump to grant him clemency, and his case drew high-profile attention.

Pressley, who introduced similar legislation in 2019, said that she saw an “outpouring” of support for ending federal capital punishment in the days surrounding Bernard’s execution.

“Because of DNA and other methods of investigation, we have discovered that many people who have been sentenced to death were innocent,” Durbin said. “One-hundred seventy-three people in the last few years have been exonerated on death row. We got it wrong. The system of justice failed.”

One of the longest-standing criticisms of capital punishment is the racial disparities in the United States. Some studies have shown that defendants convicted of killing white victims are sentenced more harshly than those who have killed Black victims.

“While we’re in the midst of this national reckoning on racial justice, abolishing the death penalty must be a part of that discourse but also our legislative actions,” Pressley said.