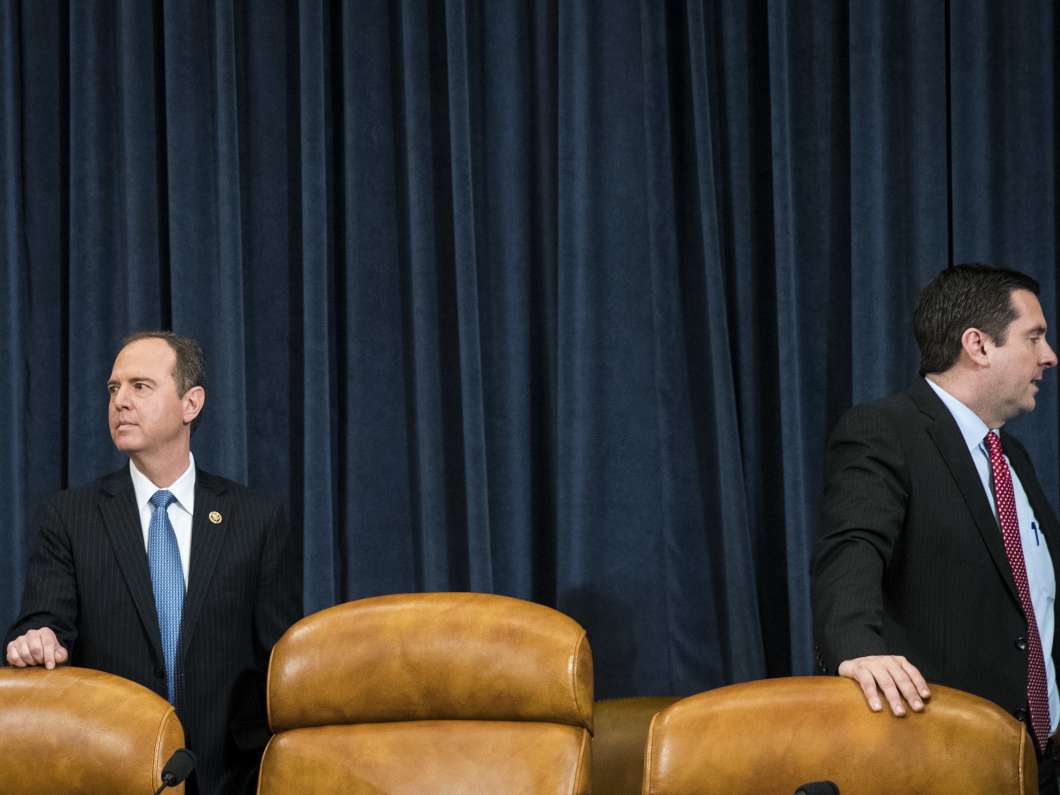 Rep. Adam Schiff (left) accuses Rep. Devin Nunes (right) of a bait-and-switch by sending the White House a document for review that is different from the one their committee voted on.
Image credit: Drew Angerer

Democrats went on the attack Thursday as the public release of a controversial secret Republican memo, accusing the FBI and Justice Department of abusing their surveillance powers, draws near.

“Chairman Nunes’ deliberately dishonest actions make him unfit to serve as Chairman, and he must be immediately removed from this position,” Pelosi says in the letter.

Ryan probably won’t agree. Nunes has enjoyed his support all along, and the speaker has backed the chairman in the fight over the memo. Republicans’ majority in the House means Nunes is no practical danger, but Pelosi and Schumer turned up volume again inside of Washington.

Their salvo followed a charge late Wednesday by the ranking Democrat on Nunes’ committee, California Rep. Adam Schiff, that Republicans changed the classified memo before sending the document to the White House.

Because the full committee did not approve the modified version presented to the president, it must be immediately withdrawn from White House review and instead return to the committee for a new vote, Schiff said.

The Democrats’ challenges were the latest twist in the bitter political fight over the secret Republican memo that alleges the FBI and Justice Department misused their authority in order to target the Trump campaign in the early days of the Russia investigation.

The memo, prepared by Nunes and his staff, is part of a campaign by Trump’s allies to prove that the FBI and Justice are biased and out to get the president.

Democrats call the document misleading and part of an effort to undermine special counsel Robert Mueller’s probe into possible coordination between the Trump campaign and Russia during the 2016 elections.

The FBI and the Justice Department both oppose releasing the memo. The bureau said in a rare statement Wednesday that it has “grave concerns about material omissions of fact that fundamentally impact the memo’s accuracy.”

The Intelligence Committee voted Monday along party lines to publicly release the four-page document prepared by Nunes, who served on the Trump transition team.

The White House is reviewing the memo, and the president has indicated he is in favor of making it public. A spokesman told reporters on Wednesday that the document could come out “very soon” and did not appear concerned that Schiff’s objections might hold up the process.

“After reviewing both versions, it is clear that the majority made material changes to the version it sent to the White House, which committee members were never apprised of, never had the opportunity to review, and never approved,” Schiff says in his letter.

Because of those alterations, Schiff says, “there is no longer a valid basis for the White House to review the altered document, since this new version is not the same document shared with the entire House and on which Committee Members voted.”

He says it “is now imperative” that Nunes withdraw the document sent to the White House and hold a new vote on it.

“In its increasingly strange attempt to thwart publication of the memo, the committee minority is now complaining about minor edits to the memo, including grammatical fixes and two edits requested by the FBI and by the Minority themselves,” he said.

“The vote to release the memo was absolutely procedurally sound and in accordance with House and committee rules. To suggest otherwise is a bizarre distraction from the abuses detailed in the memo, which the public will hopefully soon be able to read for themselves.”

Democrats have prepared their own 10-page memo to counter the Republican document. The committee voted along party lines on Monday not to release that memo, although Republicans have said they’re open to making it public later.

The process by which a congressional committee releases classified material “owned” by the executive branch is, if not unprecedented, unfamiliar enough that no one knows precisely how it should work. So it wasn’t clear on Thursday when the memo or memos might appear.

A senior House Intelligence Committee Republican, Mike Conaway, told NPR that the memo’s public release would likely be done by publishing it in the Congressional Record. That can only be done when the House is in session. The House is scheduled to have a pro forma session Friday afternoon.