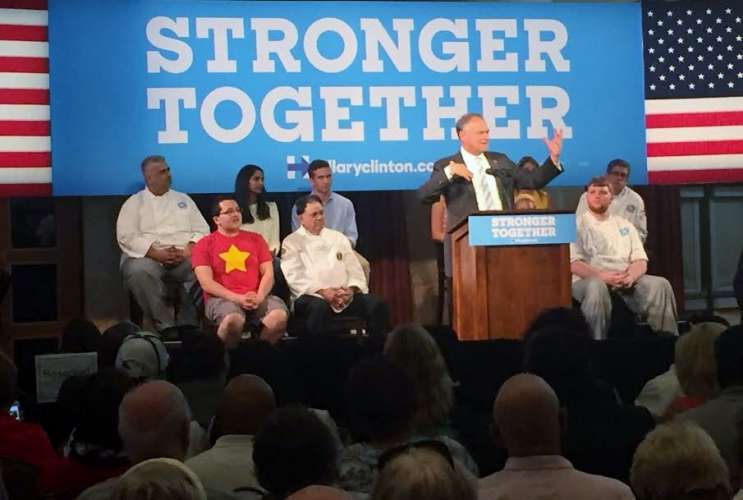 A visit to Daytona Beach Tuesday from democratic vice presidential pick Tim Kaine drew democrats, republicans, and unaffiliated from across central Florida. Jobs were the focus of his speech in a part of the state looking to attract more businesses.

Standing before a crowd of 600 voters in an auditorium at Daytona State College, Tim Kaine implored Floridians to consider the long-term effects of a Donald Trump administration.

“We don’t need a ‘Me, first’ candidate!” he shouted amid cheers. “We need a ‘Kids and family, first’ president, and that’s the kind of president that Hillary Clinton will be.”

The Virginia senator outlined a plan that he said would grow the nation’s economy by 10 million jobs, with special boosts in small business and manufacturing and attention to work-life balance. He talked about the need for real world technical skills and shared an anecdote about how he got his start, as a welder with Jesuit missionaries in Honduras:

“They asked me, ‘So you’re at Harvard Law School? Well that doesn’t give you any useful skill in the real world. But your dad, wasn’t he a welder or something?’ and I said ‘Yep!’ So they put me in charge of El Instituto Tecnico Loyola and aprendido un poquito de espanol, pero habla como un nino de 14 anos—I speak like a 14 year old!”

Republican Susan Dominguez brought her three children to hear his message but she’s still on the fence. She plans to bring them to Wednesday’s at the Ocean Center in Daytona Beach where where Republican presidential candidate Donald Trump will hold a town hall meeting.

“I think it’s very polarizing. For my kids’ sake, I’m taking them to see both. It’s interesting to see both perspectives. It’s eye opening and it’s changing my mind.”

This was the second stop in Florida that Tim Kaine has made in two days.