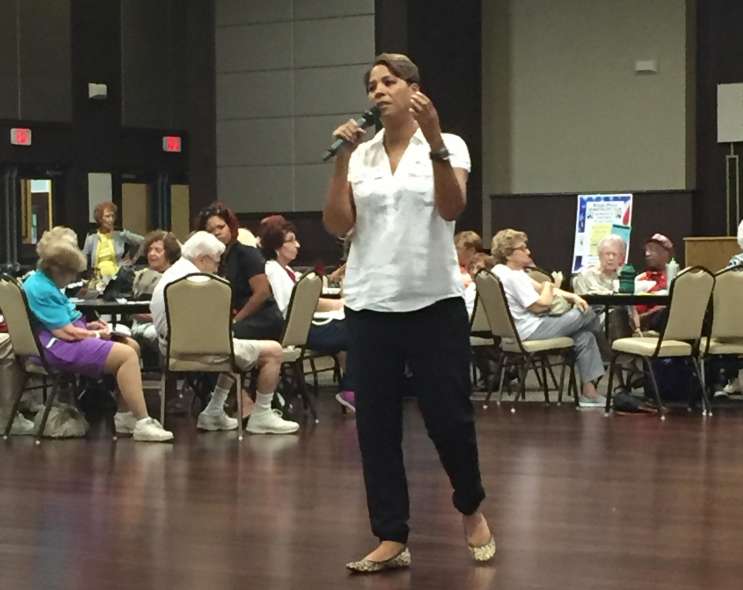 One week after the shooting that left 49 people dead at Orlando’s Pulse nightclub, an impassioned Pam Keith was fired up as she spoke to a Democratic Party meeting on gun control in Hollywood, Fla. Hands in the air, the Democratic U.S. Senate candidate almost didn’t need the microphone to be heard as she paced the floor in the middle of her audience.

“Make it harder to give, rather than to get,” she said. “That’s how you get reduction in guns on our streets.”

Gun control is one of many issues driving Keith’s dark horse primary campaign for the Senate seat held by Republican Marco Rubio. She wants to limit the sale of AR-15-style rifles.

She is by far the underdog in the primary contest, but she appears undeterred in her fight against Democratic front runners Patrick Murphy and Alan Grayson.

Globetrotting Childhood
Keith grew up around guns. Her father was in the Navy and then became a U.S. Diplomat. She herself was born in Turkey and later lived in Morocco and the Middle East. While she was in law school, she joined the Navy and started her law career as a JAG officer in the mid 1990’s.

John Jenkins worked with Keith on the JAG Corps and remembers a time when they weren’t given adequate time to prepare a defense for a group of officers facing discharge. He recalls how Keith stood up to the judge.

“For a young lieutenant it took guts to tell a commanding officer of an aircraft carrier that, ‘I’m not going to do what you want me to do because it’s not in my client’s interest and frankly, it’s contrary to the uniform code,’” Jenkins said.

When Keith left the Navy she went into private law practice. Her work took her to Chicago, Washington D.C., and eventually to South Florida when she got a job with Florida Power and Light in 2011. She now lives in Miami.

Running For Senate: “I can do a way better job!”
Keith says she found the inspiration to run for the U.S. Senate back in 2013, when she watched a very thirsty Marco Rubio take his well-publicized gulp of water during his response to President Obama’s State of the Union address. “In that moment I thought, ‘Wow I can do a way better job at that! I’m better at that!’” Keith said.

She has been campaigning full-time since November 2014, focusing on grassroots outreach at small gatherings like Democratic clubs, retirement homes and NAACP meetings.

She was campaigning in Orlando on June 12 when the nightclub shooting happened.

“She bought up water, she bought up all of these things to assist with the relief,” said campaign volunteer Marilyn Milne. “No one called. She was not before cameras. She was not grandstanding, and she worked tirelessly beside me.”

Milne is a Navy veteran like Keith. The two met a few months ago when Milne told Keith about her eight-year struggle to get VA benefits. Milne says Keith resolved the issue with one phone call. “She was relentless. She was a pit bull,” Milne said.

The Campaign Trail
Veteran’s issues are a big part of Keith’s campaign, along with LGBT rights and a path to citizenship for people in the country illegally.

Her campaign has been an uphill battle. She is polling at least 15-20 points behind front runners Murphy and Grayson; and while her opponents have raised millions of dollars, her numbers are in the hundreds of thousands.

Still, Keith says her whole life has prepared her to serve as Florida’s U.S. Senator.