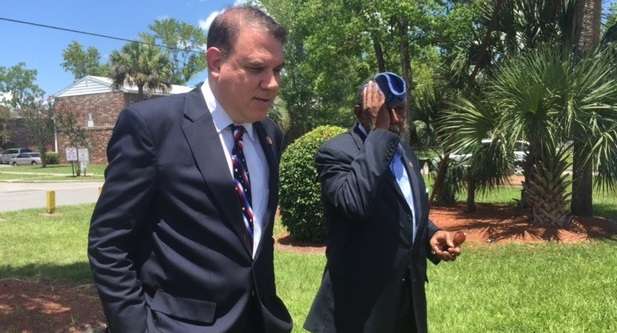 Orlando Congressman Alan Grayson is often described as a “liberal firebrand” for his passionate and sometimes combative encounters in the media and on Capitol Hill.

Many Floridians, and the rest of the nation, first got to know Alan Grayson in 2009 when he offered this description of the Republican’s position on healthcare:

“Don’t get sick, and if you do get sick die quickly.”

More recently he was the subject of an ethics probe into whether he used his name and position in congress to gain investors for his private hedge fund – a congressional no-no. He had a testy exchange with MSNBC host Joy Reid in May about that investigation.

Grayson blames his Democratic primary rival Patrick Murphy for the probe. He bristles when asked why Democratic Party leaders, including President Obama, chose not to endorse him.

“The support that matters when you’re running in a democratic election is you have support of the voters,” Grayson said with a shrug, “and I’ve got it.”

Central Florida voters got to know Grayson when they first sent him to congress in 2008. He lost the seat two years later and returned in 2012. By then, he had established himself as a tough talking liberal media darling. That persona, Pinksy said, is for Grayson supporters outside of Florida, who have donated more than $400,000 to his campaign.

“Large numbers of people, in the hundreds of thousands across the country … see him as their representative, their congressman,” said Pinsky. “And that’s where a good deal of his money comes from. I think he speaks to his national base when he speaks on national television.”

Grayson Campaigns In Jacksonville
On the campaign trail, he’s a different man. At Shiloh Metropolitan Baptist Church in Jacksonville, the towering Grayson bends down to talk with a young boy.

As he meets parishioners, he never mentions he’s running for Senate. He also doesn’t mention it during a stop at Eureka Gardens, a low-income housing complex.

Longtime resident Mona Lisa Arnold invites Grayson into her tiny apartment and tells him stories of gunfire outside her window. They spend about a half hour talking.

Allegations Of Domestic Abuse Surface
This toned down persona doesn’t reflect Grayson’s headline-grabbing personal life. Back in May, he married a woman running for his congressional seat.

Last year, his 25-year marriage came to a messy end when it was annulled after Grayson learned that his ex-wife was married to another man when they wed.

Now Lolita Grayson has come forward with allegations that he abused her. Grayson’s lawyer insists that the claims are false, saying she’s trying to derail his senate campaign.

Since the announcement, two of the nation’s largest progressive groups have pulled their support of Grayson.  To make the issue go away, Pinsky thinks Grayson doesn’t need to pull a rabbit out of his hat – he needs to pull a dinosaur out of his hat.