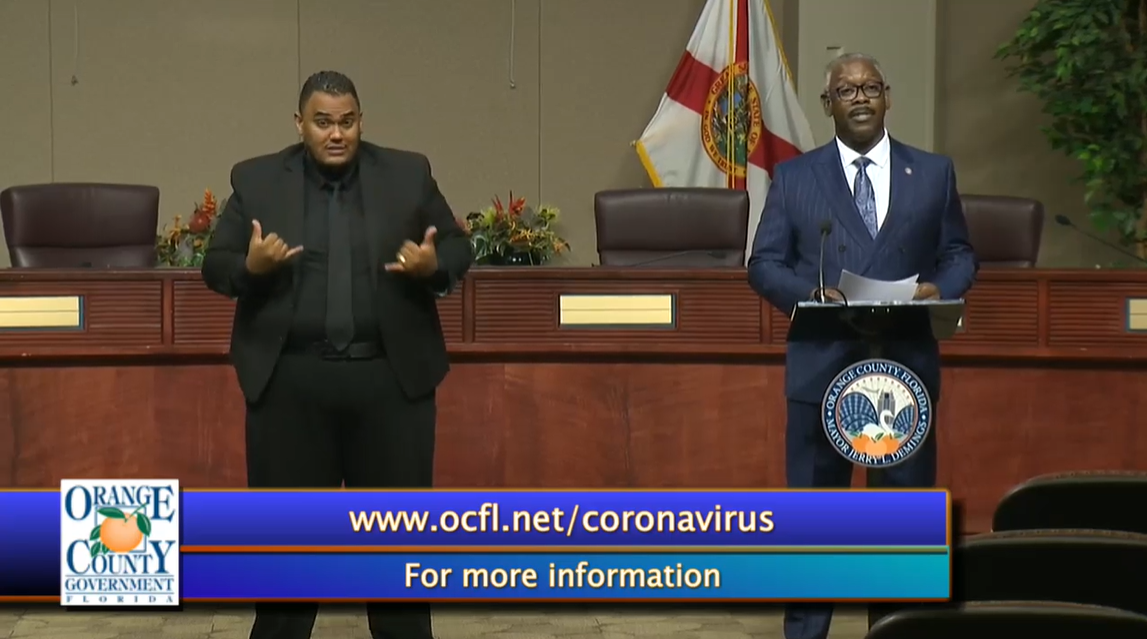 At a briefing Monday afternoon Demings said the county budget would be ‘flat’ for the next fiscal year.

“Another casualty of the pandemic will be the planned expansion of the Orange County Convention Center, as we knew it. The expansion project will be delayed at the very least,” he said.

Tourist Development taxes have taken a hit during the pandemic, with a 97% drop in collections in April.

A ‘glimmer of hope’ in the numbers

While coronavirus cases continue to surge statewide, Demings said there are some positive signs in the latest numbers for Orange County.

“Within the last 24 hours, 375 cases were reported,” said Demings, noting that the last five days have seen an additional 3,500 new cases reported in Orange County.

“When we look at the last 24 hours, that was the lowest number of new cases that have been reported in several days so I’m encouraged by that.”

Demings said the business compliance task force would be meeting next week and if coronavirus cases are still increasing at a higher rate,  the county will make adjustments to the reopening plan.

Some 13,500 individual applications for emergency funds have been processed, which Demings said equates to about $14 million in financial assistance for families in Orange County.

Dr. Raul Pino, the health officer for Orange County, says ER visits for cough, fever and shortness of breath have increased, along with hospitalizations.

However, he echoed Mayor Demings in sounding a hopeful note on new cases.

“Last week we had a reduction, a negative growth of 21%  when you compare to the prior week. And that coincides exactly with the second week that we had the mask-on ordinance in Orange County. And that should not be a coincidence.”

Pino said the county had also seen a “slight reduction” in the positivity rate for tests over the last 14 days.

“So the reduction is not significant: it is very slight, but it’s moving in the right direction.”

Gov. Ron DeSantis has called for more antibody testing statewide. Pino said the county is planning to ramp up testing for antibodies.

“We are in the search for the equipment and to be able to acquire the equipment that is needed for some either antigen testing or antibody testing,” said Pino.

“But it’s not something that we are pursuing aggressively, because we are more interested in controlling outbreaks right now than determining if people have immunity to the disease.”

Schools may have to “get creative” to reopen safely

Demings said schools may have to “get creative” to ensure that social distancing can be maintained when classes resume.

He said a “bifurcated” learning environment combining online and in person classes may be an option.

“If we continue to work together, I’m optimistic that we can lower the numbers and contain the virus to the extent we can, and our children can return to school.”

“At this point, I’m fairly comfortable with the decision that Disney has made to reopen because of the extent that they have gone through to ensure a safe environment,” said Demings.

“We have to try to get our economy stimulated, but we don’t want to do that at the expense of risking people’s safety,” he said.

MLS is scheduled to begin its ‘MLS is Back’ tournament at ESPN Wide World of Sports complex at Walt Disney World Resort on Wednesday. The NBA is due to resume its season on Disney property at the end of the month.

Demings said both the NBA and Major League Soccer have gone to great lengths to ensure the safety of players, even as coronavirus cases have spiked in Central Florida.

“If the leagues, and the players, and the staff believe that they can do it safely in consultation with the healthcare experts down, I say, why not try it.”

“You know I think America is starving for televised sporting competitions. And so it’s a way for us to get beyond the COVID-19 fatigue, that we are experiencing,” he said, adding that if it appears too risky, he’s confident the league will make the right decision and suspend the tournament.

Meanwhile,  MLS announced Monday that FC Dallas had been withdrawn from the MLS is Back tournament after 10 players and one staff member tested positive for COVID-19

Dr. Pino said he’s been in close conversation with the NBA and Major League Soccer starting at Disney, about which players in “the bubble” will get tested and how often.

“So this system is working as it was designed. So we are hopeful that it can continue to be the way it is.”