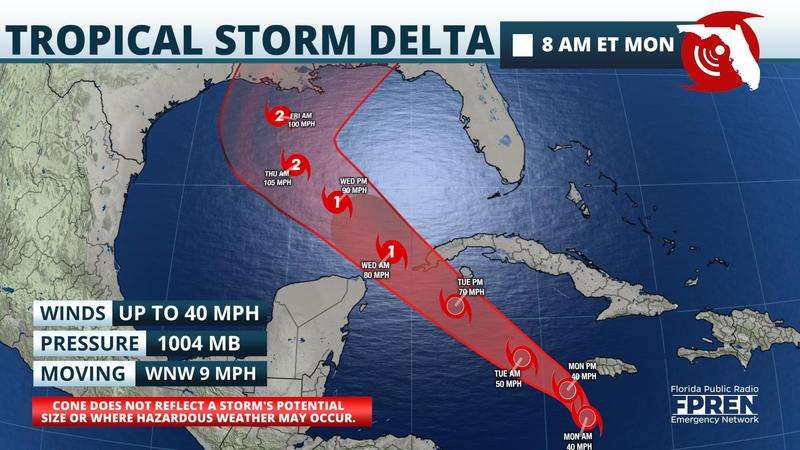 Newly-formed Tropical Storm Delta is likely to intensify rapidly as it approaches the Gulf of Mexico early this week. It is expected to threaten the north-central Gulf coast as a hurricane on Friday.

Forecasters at the National Hurricane Center classified the depression early Monday morning before upgrading it to Tropical Storm Delta hours later. It is forecast to traverse the deep, warm waters of the northwest Caribbean Sea and southern Gulf of Mexico early this week, where water temperatures are between 85 and 87 degrees. Strong wind shear, which can tear hurricanes apart, is expected to be light or non-existent for a few days. This warm water and low wind shear environment favors rapid intensification and the system is expected to be a hurricane late Tuesday or early Wednesday.

The latest official forecast calls for the storm to be at category 2 intensity as it approaches the northern Gulf coast. It is expected to be steered generally northward between a ridge of high pressure over Florida and a trough of low pressure over the Texas coast. The exact strength of those two systems will determine the path of the storm, with the most likely landfall location somewhere between the Louisiana Gulf Coast and the western Florida Panhandle some time on Friday. Forecasters at the Hurricane Center said there is a risk of dangerous storm surge, wind, and rainfall hazards, but that there was large uncertainty in the track and intensity forecast at this time.

Hurricanes Hanna, Laura, and Sally all strengthened because of very warm water near the northern Gulf coast earlier in the season. A recent cold frontal passage has cooled the water temperatures near the immediate coast and this factor may reduce the risk of an intensifying storm all the way to the coast. Still, the storm is forecast to be a hurricane as it approaches and residents along the northern Gulf coast are strongly encouraged to monitor the forecast this week.

Meanwhile, Tropical Storm Gamma continues to spin near Mexico’s Yucatan Peninsula. It is forecast to weaken and potentially interact or become absorbed into the system that is likely to become a hurricane this week. Significant flash flooding and tropical storm force winds from Gamma are expected to continue affecting the Yucatan for the next several days.