Delhi Riots Aftermath: ‘How Do You Explain Such Violence?’ 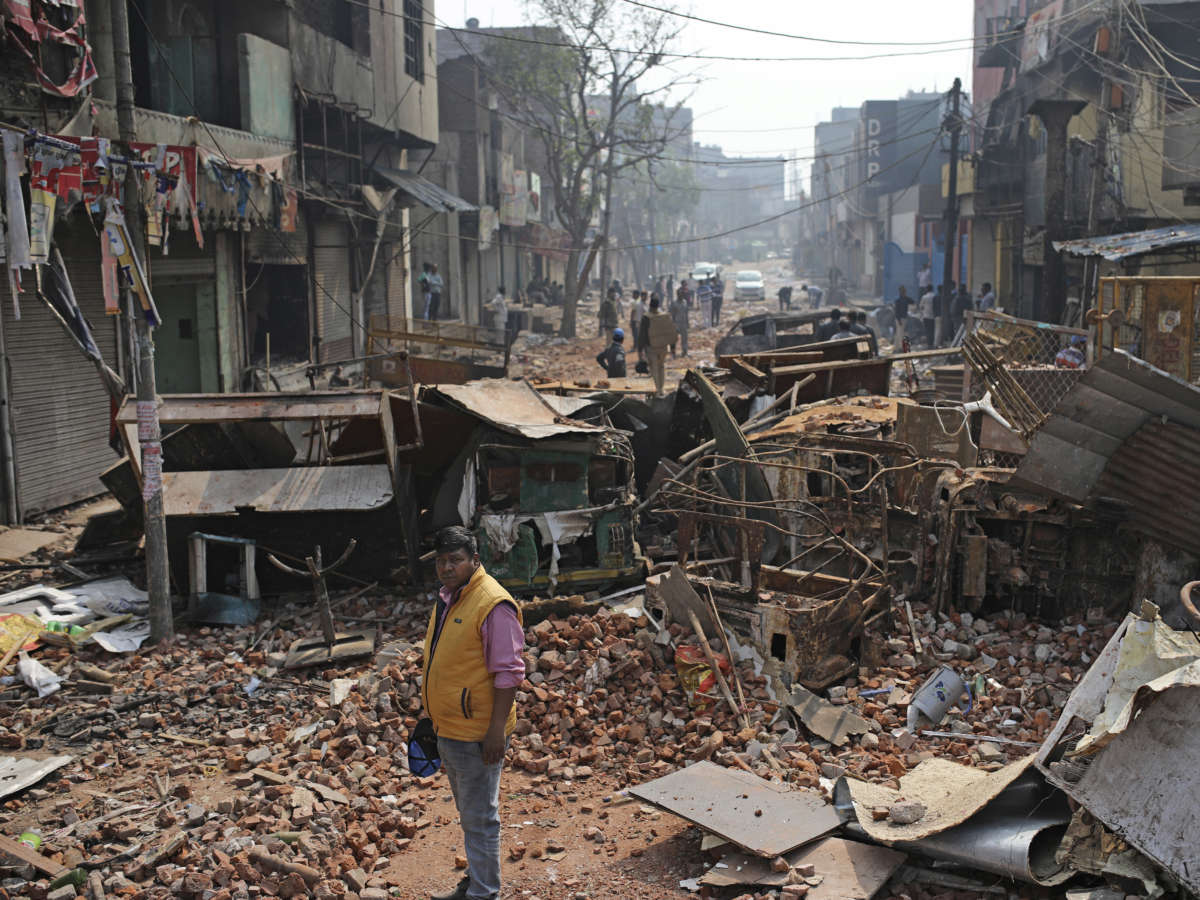 A municipal worker stands next to rubble on a street vandalized in New Delhi last month. Communal violence in India's capital killed more than 50 and injured more than 200 as President Trump was visiting the country. The violent clashes between Hindu and Muslim mobs were the capital's worst communal riots in decades and saw shops, Muslim shrines and public vehicles go up in flames.
Image credit: Altaf Qadri

From outside a garage door in India’s capital, you can hear the sound of wailing.

Inside, dozens of women in colorful headscarves sit cross-legged on the cement floor, in concentric circles, crying. At the center is the mother of a 17-year-old boy.

The hospital just called: Her son is dead.

More than a week after the capital’s worst religious riots in decades, violence has mostly abated. But hundreds of wounded are languishing in understaffed medical facilities. Corpses are still being discovered in drainage ditches. Victims are still dying in hospitals. The death toll has reached 53.

Most of the casualties are Muslims, who comprise about 14% of the population, nearly 200 million people in Hindu-majority India. In New Delhi, mosques have been burned, schools looted and thousands of families displaced.

Police are facing accusations from victims, witnesses, human rights groups, opposition politicians and Muslim leaders worldwide that they failed to protect Muslim citizens, and in some cases, even incited attacks themselves. The United Nations High Commissioner for Human Rights has expressed “great concern,” and the U.S. Commission on International Religious Freedom notes the allegations come amid “efforts within India to target and potentially disenfranchise Muslims.”

Tension had been building for weeks over the Hindu nationalist government’s new citizenship law, which excludes Muslim refugees. New Delhi saw a growing number of street demonstrations. Some ruling party politicians labeled Muslim protesters “traitors” and even called for them to be shot.

Saira, the 42-year-old mother who’s just learned of her son Mohammad Aakib’s death, doesn’t know exactly what happened. He was on his way home from a religious gathering on the night of Feb. 24, she says, when Hindu mobs rampaged their Muslim enclave. He never made it back.

“No help from the government”

At Al-Hind Hospital in Delhi’s New Mustafabad neighborhood, one of the worst-hit by violence, Dr. Meraj Ikram walks past a row of beds, rattling off each patient’s injuries: gunshot, gunshot, gunshot, shot at close range with a tear gas canister.

Ikram, 29, is a dentist, the only medical professional staffing this small hospital when NPR visited Tuesday. He dashes back and forth between a sink where he sterilizes instruments, and a row of prone patients, where he stitches up gaping wounds, some of which appear infected. A patient grimaces. The stench — perhaps from vomit, pus and blood — is powerful.

This is nothing compared to the scenes at the hospital soon after the riots erupted, Ikram says.

“We had 60 to 70 healthy families take refuge here last week, fleeing violence outside. We didn’t have enough beds. The dead bodies, we had to lay them out on the floor,” he recalls. “For the first 24 hours, we got no help from the government.”

This week, thousands of Indian police and troops in camouflage are manning yellow metal roadblocks in the dense warren of streets in northeastern New Delhi that was worst hit by the riots. It’s a religiously mixed area, where neighbors took up arms against neighbors. Authorities have since registered more than 600 official complaints and detained nearly 2,000 suspects.

Anisha, a 50-year-old grandmother who goes by one name, says she dialed police in a panic as she watched a mob of angry young men approach her home, where she lives with 15 relatives.

“They were wearing helmets and waving swords. I recognized them! Some of them were my neighbors – [Hindu] boys I’ve watched grow up. Suddenly they were threatening to kill my family,” says Anisha, who spoke to NPR under a tent at the Eidgah relief camp, set up last weekend by local authorities. “I escaped with my grandchildren, as the mob threw Molotov cocktails. I called the police again and again — but they never came.”

The message is that if you’re Muslim, you have to prove your loyalty to India. One of the men later bled to death.

Neeraj Kumar, a retired Delhi police commissioner, tells NPR he hasn’t seen any of these videos. But, he says: “If the police had been doing their duties, some of the deaths could have been prevented.”

Kumar says there’s no doubt that police failed to protect people. The problem is lack of leadership, he believes. Officers were caught off-guard by the timing and severity of the riots, he says.

The violence began with isolated attacks Feb. 24, when Indian security services and media were all focused on President Trump’s first official visit to the country.

Meanwhile, local officials from Prime Minister Narendra Modi’s Hindu nationalist Bharatiya Janata Party were getting increasingly irritated by months-long street protests over the new citizenship law. Some of those protests were Muslim-led. BJP officials demanded that police clear out protesters from the capital once and for all, or they’d take matters into their own hands.

“We’ll hold back only until Trump departs,” Kapil Mishra, a local BJP leader, told his supporters on Feb. 23.

And that’s what appears to have happened. On the night of Feb. 25, violence erupted on a much larger scale, as Trump departed. Mobs torched Muslim homes, chanting “Jai Shri Ram” — praise Lord Ram, one of the Hindu gods. They appear to have targeted Muslims indiscriminately, rather than targeting protesters.

Several Hindus were killed in the violence too — including a policeman and an intelligence officer. Videos also show police coming under attack.

Kumar, who retired as police commissioner in 2013, vehemently denies the Hindu-majority Delhi police force showed bias during the city’s riots.

“Please understand: The cruelty and the barbarity and the inhumanness — it is both-sided,” he says. “Someone told me that there was a hole drilled into the head of a Hindu.”

He added that the way in which the intelligence officer was stabbed to death — allegedly near a Muslim politician’s house — was “something like what ISIS does.”

“Living on a tinderbox”

Tales of torture are being traded on both sides, ratcheting up fear, tension and trauma.

“We are living on a tinderbox now,” says Arundhati Roy, one of India’s most famous writers. She is a vocal critic of Modi, who was re-elected as prime minister in a landslide last spring.

Modi’s ruling BJP has long been accused of sowing communal hatred to gain votes in Modi’s home state of Gujarat, in Muslim-majority Kashmir and in New Delhi.

Roy says this used to be a BJP tactic only during election campaigns, but the party now appears to be inciting communal hatred all the time — with the help of private, pro-BJP TV channels.

“You run a government in which you marinate people in propaganda. Now, you have 400 television channels. They’re just pouring out this poison, night and day, night and day,” she says.

No wonder violence erupted, Roy says. She wonders what India’s Muslims are supposed to do now.

On top of the most recent attacks, they also face unprecedented legal challenges to their very identity as Indian. Modi’s Hindu nationalist government, with its new Citizenship Amendment Law, has revised the rules about who can become Indian, excluding Muslim refugees. The country’s National Register of Citizens has slated nearly 2 million people — mostly Muslims — for removal from citizenship lists in the country’s northeastern state of Assam. Modi’s home minister has threatened to expand that process nationwide.

This week, Freedom House issued a report saying the Indian government’s “Hindu nationalist agenda” seeks to “abrogate the rights of different segments of its Muslim population, threatening the democratic future of a country long seen as a potential bulwark of freedom in Asia and the world.”

Back in northeastern Delhi, Mehtab Qamar, 50, surveys a pile of soot and rubble. His family’s shop, which he ran for 15 years, was one of hundreds of buildings set on fire last week.

All that’s left now is a blackened hole in a city block. Qamar sits on a bench on the curb, with his head in his hands. He says he has no money to rebuild. The fire also destroyed his home upstairs.

After the attack, he didn’t eat for several days and had to be hospitalized. Qamar and his family are now staying with friends.

“Our two children are too scared to ask us about what happened, and we don’t really know how we would answer them,” says Qamar’s wife, Rosia Siddiqui, 42, who’s draped in a black shawl. “How do you explain such violence?”

It’s the worst she’s ever seen, she says.

Roy fears it won’t be the last. In a recent essay, she wrote that she “smells more blood on the breeze.”

The question of what happens next keeps her and many others up at night, she says.

“The night before last, I was awake. I just couldn’t sleep, because I was thinking about all this. I just keep getting messages. All my Muslim friends are awake. People keep messaging, ‘Are you awake? Are you awake?'” she says. “I’m awake. Are you awake?”