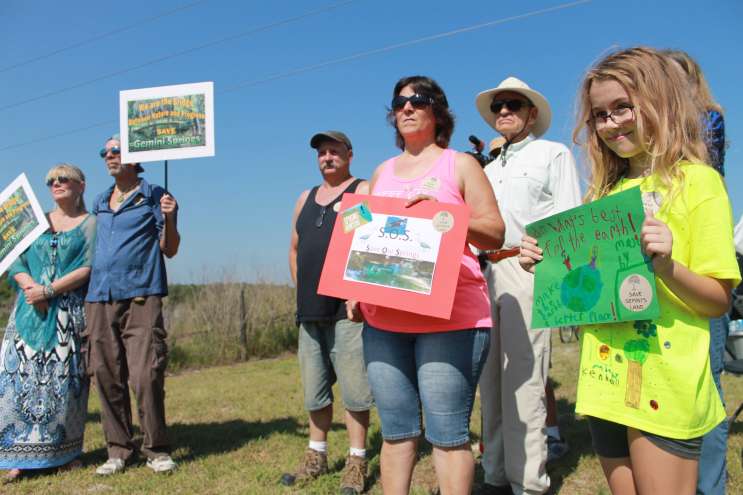 Demonstrators gathered near Gemini Springs Park in May to protest the development. Photo by Amy Green

A community meeting is Wednesday evening in DeBary on a 100-acre stretch of conservation land that is stirring controversy.

City leaders want to develop the land, and to help them they have hired the consulting firm of the chairman of the St. Johns River Water Management District, which owns the land.

D. Renee Wilson points beyond the sunbaked scrub toward an oak hammock not far away.

Nearly every day she and her husband are on the Spring-to-Spring Trail where it skirts the north shore of Lake Monroe. This is among her favorite spots.

“You have the sunlight that bounces off of the Spanish moss, and you look out onto Lake Monroe and all of the glistening water,” she says. “It’s very awe-inspiring. It’s a nice little sanctuary.”

Wilson was among several dozen who gathered Saturday to protest a proposal to transform this land into an “urban village,” with more than 2,000 single-family and multi-family homes, nearly 20 acres of commercial and office space and a storm water pond at the center.

“I thought, I hope we get at least 500 signatures on this,” she says. “I hope people are as outraged as I am, and several thousand signatures later it’s obvious. People don’t want this.”

The land is part of an 800-acre expanse the St. Johns River Water Management District purchased years ago to balance the environmental impacts of Interstate 4.

DeBary City Manager Dan Parrott says the land’s location east of the city’s SunRail station makes it ideal for a high-density development that would encourage ridership. He says the development also would help the city restore the DeBary Bayou.

“That was our initial desire to do,” he says. “But at the same time you have to in order to pay for that you have to encourage the development because that’s what generates the tax dollars to invest into restoring the bayou.”

Many are further angered by the role of John Miklos, chairman of the St. Johns River Water Management District. Miklos also is president of Bio-Tech Consulting, which DeBary has hired to help with the land’s acquisition from the water district. The arrangement is allowed under Florida law, but St. Johns Riverkeeper Executive Director Jimmy Orth says it’s unethical.

“It’s really frightening to think the chairman of this board that governs this agency that manages this land is trying to undo those protections, when in fact his own staff a few years ago in 2012 deemed this land to have high conservation value and needed to be protected with a conservation easement,” he says.

Back on the Spring-to-Spring Trail protesters hoist posters proclaiming things like, “J. Miklos You Can’t Drink Money.” Some push children in strollers. Others are led by dogs on leashes.

“Frankly we have available residential areas all over the county and state. We’re not at a lacking of available housing. But once something like this, once it’s removed it’s gone. It’s not coming back.”

DeBary will hold its community meeting at city hall at 6 p.m.