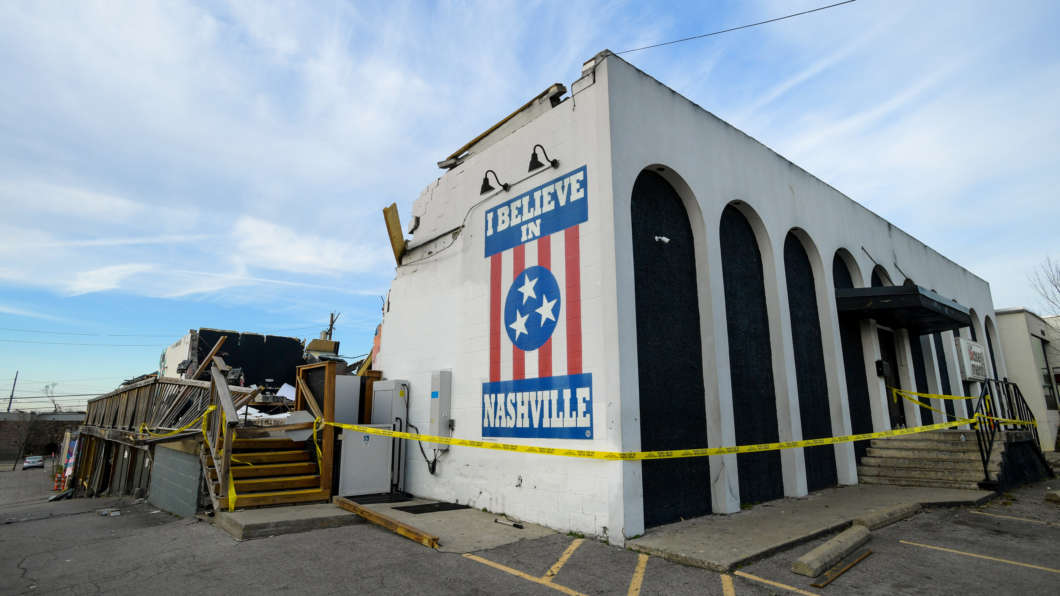 The destroyed exterior of The Basement East following a tornado that struck in the early hours of March 3, 2020 in Nashville. At least 24 people have reportedly been killed, with many more still missing.
Image credit: Jason Kempin

Early Tuesday morning, a tornado ripped through Nashville and greater middle Tennessee, causing extensive destruction to homes and businesses and claiming the lives of 24 people across four counties. While not the only neighborhood to sustain widespread damage, East Nashville was hit particularly hard, delivering a harsh blow to the city’s vibrant music and arts communities.

One of the first businesses to be reported as damaged was the Basement East, a beloved venue that opened in 2015 and has since been host both to national touring acts and to favorite local artists alike. In the hours after the storm, photos of the venue’s collapsed outer wall — with its “I Believe in Nashville” mural still intact — began flooding social media, accompanied by heartbroken tributes from artists and music fans.

Just hours before the tornado touched down, the “Beast,” as the venue is affectionately known, played host to the second night of “Berniefest,” a collaborative concert that sought to raise funds and awareness for Bernie Sanders’ presidential campaign. Artists who performed Monday night include Lissie, Sarah Potenza, Darrin Bradbury and Liz Longley.

At 1:55 Tuesday morning, the Basement East tweeted, “All staff working tonight are okay! Building sustained significant damage.” In a later post to Facebook, Basement East staff said they were working to relocate or cancel upcoming shows, and to “bear with us as this process could take a few days to weeks.” One such show — country singer-songwriter Hailey Whitters’ March 10 date at the Beast — has already found a home on the same date at Exit/In, with all proceeds to be donated to tornado relief.

Emilee Warner co-produced Berniefest alongside local musician and producer Dean Moore. Speaking with NPR Music via phone, Warner says of the venue, “The Basement East is so special because of the community it supports and creates. What the Basement East represents is more of a community than a building. And Mike [Grimes] and Dave [Brown] put that venue in East Nashville intentionally, knowing that it would thrive because the artists and the fans live nearby. That’s where they want to go see music: in their neighborhood.”

The Basement East is located near East Nashville’s popular Five Points Neighborhood, home to numerous bars, restaurants and shops, as well as the historic and densely populated residential neighborhoods Lockeland Springs and Edgefield. East Nashville is known not only as a popular hangout destination for musicians and music fans, but also where much of Nashville’s music community works and lives. Many of the businesses that were lost in the tornado, like restaurant Burger Up and clothing store Molly Green, were part of the city’s vibrant service industry, which often serves as an employment hub for up-and-coming musicians across the city.

Nashville singer-songwriter Mercy Bell tells NPR Music that, when the tornado hit, she was working at Five Points-adjacent bar Rosemary, which she describes as being “run by musicians and music industry folks.” Bell and her co-workers huddled in the bar’s basement for safety when they first heard tornado sirens, before eventually venturing out into Five Points to see if their friends at other establishments were safe.

“I stood in the middle of the street dumbfounded and heartbroken,” Bell says, describing the moment she saw the destruction of establishments like Burger Up. “This was the neighborhood and community that’s given me my music and it was demolished. I felt the wind taken out of me. I don’t know how to explain what it feels like to look at a place you’ve called home for years in ruins.”

Dualtone Records, whose roster includes Shovels & Rope and Angie McMahon, lost its headquarters, which was situated just a block away from the Beast. Dualtone president Paul Roper tells NPR Music that their McFerrin Ave. office was “hit really hard” and that the label “will be rebuilding over the coming months.”

“It is an emotional thing seeing our neighbor’s building at Basement East devastated, and much of Five Points in what now looks like a war zone,” Roper adds. “Amidst it all, we are grateful to so many who have reached out with their love and support. This music community is strong and that is felt nowhere more closely than in Nashville. We saw this with the flood of 2010 and you can feel it again now: This city will lift one another up and come back stronger through it all.”

Neighborhoods north of downtown Nashville were also hit hard. Germantown, Salemtown and Historic Buena Vista all suffered massive property damage, with many displaced residents sheltering, for a time, at the nearby Nashville Farmers Market. These neighborhoods run alongside historic Jefferson Street, a main drag known for its deep roots in Nashville’s soul and R&B communities, and as a hub for the city’s black businesses and historically black colleges and universities, including Fisk University and Meharry Medical College.

The Donelson neighborhood also suffered great damage. The community, which lies just across the Cumberland River from East Nashville, also boasts a high number of musical and creative residents, both for its proximity to East Nashville and for its affordable housing. And while the national spotlight shines on Nashville, neighboring suburbs like Mt. Juliet and nearby Putnam County were also devastated by the tornado, with Putnam bearing the brunt of the death toll at 18 killed and many others still missing. Tuesday also marked “Super Tuesday” in Tennessee, with many residents heading to the polls at alternate locations late into Tuesday evening.

Many artists, both local and otherwise, have already started initiatives to raise funds and collect donations for victims of the tornado. Early Tuesday, country singer-songwriter Margo Price tweeted, “My heart is breaking for Nashville today. We left Five Points just minutes before the tornado hit completely unaware that it was coming. I feel lucky to be alive and still have a home,” before embarking on a day-long effort to deliver supplies to the Red Cross. Fellow Nashvillian and country artist Kacey Musgraves announced, via Instagram story, her plans to sell some of her clothing and accessories to Stage to Closet, with proceeds benefiting tornado relief.

Brittany Howard, known for her solo work and with bands Bermuda Triangle and the Alabama Shakes, posted an Instagram photo of her hands, presumably dirty after a day of helping neighbors sift through the wreckage of their homes, with the caption, “I love this community so much. I don’t know what else to say, really. Everyone is out here today helping with each other and it’s really moving,” along with links to aid organizations like Hands on Nashville, the Community Foundation of Middle Tennessee and the Red Cross of Tennessee. (For those both in and outside of Nashville looking to help victims of the tornado, the Nashville Scene has compiled a handy guide to local organizations who accept both donations of money and aid items, as well as resources for those hoping to volunteer their time toward the recovery effort.)

Price, Musgraves and Howard are but three of many already working tirelessly to raise funds and help out on the ground throughout their middle Tennessee communities.