Wednesday, May 4, 2022 by Amy Diaz (UCF School of Communications) 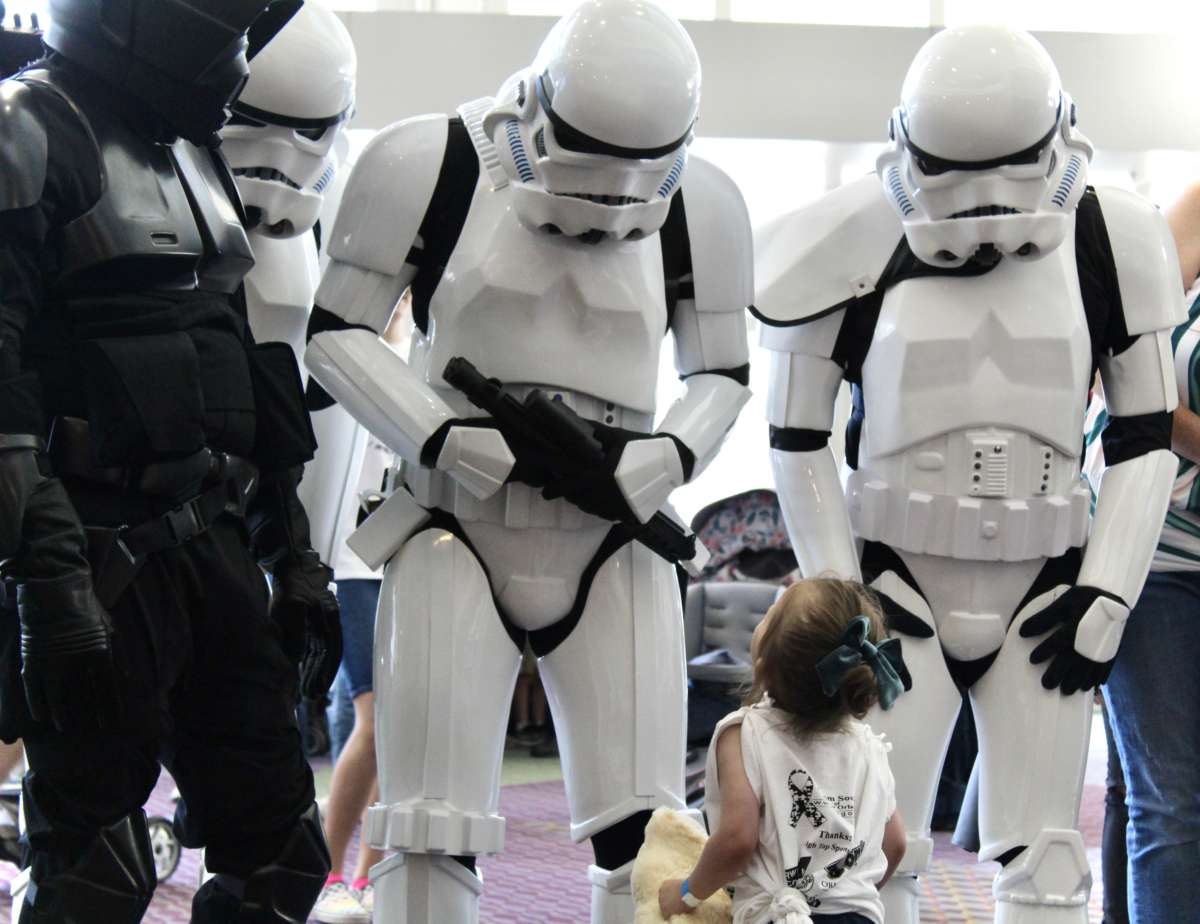 Amy Diaz- Members of the 501st Legion interact with children at the Autism Walk and Fun Day at the Orange County Convention Center.

You may be used to seeing storm troopers hunting down Jedis and taking over planets, but there is a group of troopers in Central Florida who are only here to do one thing: bring smiles to people’s faces.

The 501st Legion is a non-profit, international costuming charity group that attends public and private events to raise money for organizations around the world. They do everything from visit children in hospitals to attending galas, private weddings and birthday parties.

The 501st has over 300,000 members worldwide. The Florida garrison is the second largest in the world following Germany, and the local squad in Orlando, the Makaze Squad, has over 200 members.

Laurel Garcia, a member of the Makaze Squad, says there is an event almost daily in Central Florida.

“Orlando is so busy with so many wonderful events that we literally have events almost every single day that we show up to.”

Amy Diaz- Members of the 501st Legion take photos with a child at the Autism Walk and Fun Day at Orange County Convention Center.

Makaze squad members don’t charge for appearances, but instead suggest a donation to a charity.

Garcia says they are always well received at events, whether it’s adult fans of the “Star Wars’’ movies or children amazed at the costumes.

“That immediate bonding with those kids is so amazing,” she said.

These “bad guys doing good” are certainly a hit with most kids, but not all are so sure about the characters. Jamie McManus, the squad’s social media manager, says the reactions vary.

“Sometimes, you’re standing there in costume and kids run up to you and hug you … sometimes they kind of stare at you from a little bit away,” McManus says.

McManus says a lot of children tend to like the mask less characters and seeing their faces. Occasionally, she says, a few children will have a meltdown and cry because they’re scared of a character.

Recently, the Makaze squad took their act to the Autism Walk and Fun Day at the Orange County Convention Center, an event they return to each year because they are popular with the children and adults.

This squad isn’t just a group of hobbyists who throw on a Halloween costume and show up. Since the 501st Legion is affiliated with Disney and Lucas Film, the production company for “Star Wars,’’ they are required to have authentic costumes that accurately match those you see in the movies.

“We have to be ready to walk onto a movie set…down to the smallest detail,” Garcia says.

While some of the members make their costumes by hand using different kinds of fabrics and plastics, others order their costumes through the organization.

Garcia says the costumes are so accurate, members were banned from wearing them to the Star Wars Landing at Disney’s Hollywood Studios resort because of how often they get mistaken for cast members.

When it comes to costume characters, an essential item in their suit is a speaker they attach to either the side of their belt or armor, that allows them to speak through a mic to people. This way, Darth Vader can scream “I am your father” in clear, high-definition sound.

When the Covid-19 pandemic shut everything down, these troopers kept their eye on their motto: bad guys doing good. During lockdown, they attended virtual weddings, sent congratulation videos to graduating students and continued to raise money for charities. Even though they did not have the in-person connection, they adapted to the times to bring smiles through computer screens.

On May the 4th, let’s remember the time NPR had a ‘Star Wars’ radio drama