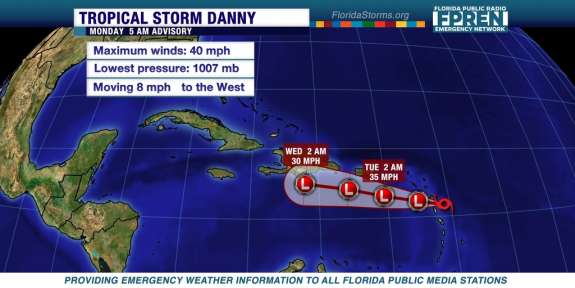 By Monday morning, Danny weakened back to a tropical depression as it approached the Leeward Islands. As expected, wind shear and dry air had taken its toll on the first and only hurricane of the season so far. Some minor fluctuations in intensity may occur Monday and Tuesday, but Danny is forecast to dissipate by midweek in the northern Caribbean. Beneficial rains and gusty winds will be the only byproduct of Danny for the Leeward Islands and Puerto Rico in the coming days.

In the central Atlantic, about midday between Africa and the Windward Islands, the National Hurricane Center says a new tropical wave is likely to develop into the season’s fifth named storm by Tuesday. If it does, it would be named Erika and could follow closely in Danny’s footsteps. Early forecast data suggests the soon-to-be tropical storm may track a little farther north than Danny did, but it is too soon to project with any degree of confidence whether this system will threaten any land.

A third area of interest is a tropical wave currently moving off the west coast of Africa, nearing the Cape Verde Islands Monday. Conditions are only marginally favorable for development with this feature at the present time, but it too will be watched closely in the coming days.

Danny has escalated to a Category 3 hurricane with winds up to 115 miles per hour. The National Weather Service reports the storm is making its way through the tropical Atlantic where it’ll encounter high wind shear.

“Danny may not even survive the trek across the central Caribbean and may open up into a wave,” he said. “That remains to be seen, but, at any rate, we do expect Danny to continue to weaken as it goes through the eastern and central Caribbean.”

Feltgen said Danny could reach Puerto Rico and other northeastern Caribbean islands by the end of this weekend.

Meteorologists are not sure whether the storm will hit the continental United States.