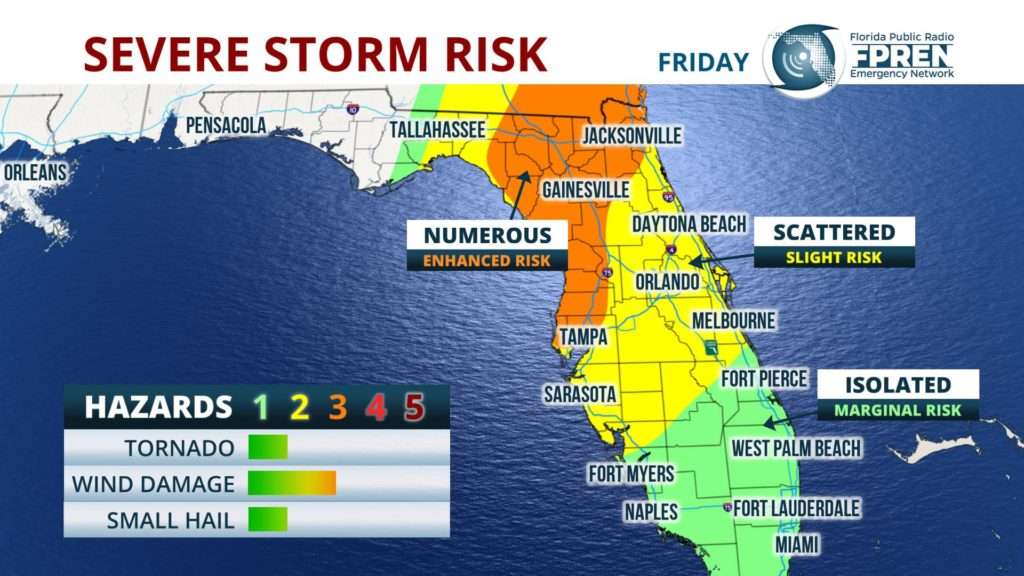 A dangerous squall line of thunderstorms is sweeping across the entire Florida Peninsula today.

The greatest risk to life and property from this event will come from straight-line winds. The Storm Prediction Center says a few isolated tornadoes may develop today. As the line of storms moves eastward through the Big Bend and Peninsula, straight-line winds may be powerful enough to uproot trees and damage some structures.

Forecasters at the Storm Prediction Center have been highlighting the potential hazard for several days, and the approaching storm system has already proven destructive. More than 400 reports of large hail, wind damage or tornadoes were reported Wednesday and Thursday in the central and southern U.S.

The front is expected to clear South Florida Friday night, leaving behind a much cooler, less humid – and more stable – air mass for the weekend.

Go to the Florida Storms facebook page for live updates

Weather Alert!
Severe weather is on the way to the Orlando area. Flight and baggage delivery operations will likely be affected by this line of storms. Contact your airline for flight updates before hitting the road to MCO. Be safe! pic.twitter.com/zwo1XP8SQA

Orlando International Airport has resumed operations after thunderstorms and lightening shut down the tarmac early this afternoon, stopping arrivals and baggage processing.

But passengers flying into or out of the airport can still expect cancellations and delays caused by inclement weather along the eastern coast of the United States.

As of 6 PM Friday a spokesperson at the airport reported more than 100 flights had been canceled, with delays expected to continue throughout the weekend.

Restaurant hours will be extended Friday to accommodate passengers who are waiting for their flights.

Travelers should check with their airline to see if their flight has been affected and plan on the airport being busier than normal this weekend.