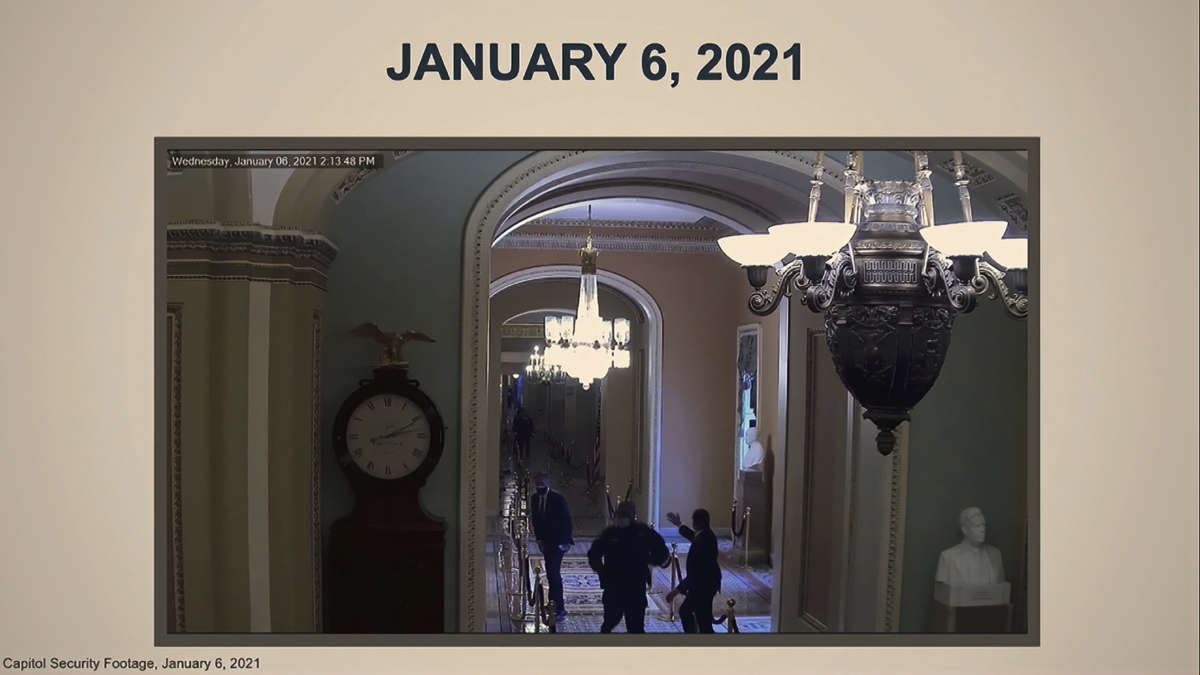 On Wednesday, House impeachment managers had senators riveted to disturbing new security camera video that showed just how close the rioters that breached the U.S. Capitol came to lawmakers in the House and Senate chambers.

Wednesday’s images, from several angles outside the chambers and in hallways outside leadership offices, showed one Capitol police officer run past Utah Republican Sen. Mitt Romney and direct him to turn around and run, as rioters were closing in on that location just off the Senate floor.

Ominously, the video also showed staffers for House Speaker Nancy Pelosi move to hide behind a door in what is typically a secure office suite that minutes later was overrun by a mob that repeatedly tried to break down that same door.

Wednesday was the first of two days for the nine managers to present their case. After they finish on Thursday, the floor turns to Trump’s defense.

One by one, the impeachment managers have been methodically re-creating a timeline. They went back months to try to show that former President Donald Trump not only incited rioters at the rally on Jan. 6, but that he laid the foundation to sow doubt in the outcome of the election that led to violence.

They argued that Trump repeatedly claimed any loss on Nov. 3 meant the election was “rigged” in rallies, tweets and speeches, and that he knew those who organized and attended the rally backed his effort to “stop the steal.” The House members walked through how after various failed efforts to undermine the elections — including pushing state officials to overturn results, legal challenges and other attempts at intimidation — Trump was left with the focus on the last day, the day Congress met to count and certify the electoral votes.

Lead manager Rep. Jamie Raskin, D-Md., asserted that Trump was “no innocent bystander” and that he “surrendered his role as commander in chief and became the inciter in chief.”

“He told them to fight like hell, and they brought us hell on that day,” Raskin said.

Managers previewed that they planned to share video and audio clips that had not been previously released. The edited video montage they aired on Tuesday was jarring in that it reminded lawmakers of what it was like that day, but the images revealed Wednesday showed how much worse it could have been.

Delegate Stacey Plaskett, from the Virgin Islands, used a graphic of the Capitol showing the layout of the Senate and House chambers alongside new security video showing where and how insurrectionists crashed through windows and doors using bats and flags not far from the Senate chamber.

She noted that one member of the right wing group the Proud Boys was among those leading the breach. Plaskett also played audio of police calling for backup and declaring the scene a riot as they reported many in the mob had weapons and bear spray.

The images and timeline revealed how the crowd moved quickly to overrun those U.S. Capitol police in key areas throughout the building, and in one case just 100 feet or so from where then-Vice President Mike Pence was sheltering.

Reporters in the building on Jan. 6 noted that Pence was quickly pulled off the Senate floor to a secure room, but the new video showed him being evacuated briskly by security down a back hallway, with the graphic from Plaskett denoting how close the rioters were.

She emphasized they were hunting for Pence “to execute” him, because he was viewed as a traitor after he declined to bend to Trump’s demands to overturn the election results.

She pulled statements from criminal indictments of those arrested, noting that one said if they had found Speaker Pelosi, “they would have killed her.”

The security footage also showed how plainly outnumbered the U.S. Capitol police officers in and around the chambers were in the face of what looked like scores, if not hundreds, of people dressed in fatigues, wielding flags and pounding on doors to offices and the House chamber. It depicted hand-to-hand combat between a group of police and rioters just feet from the House floor.

“They were coming for us,” Rep. David Cicilline, D-R.I., said to the senators about the rioters.

Texas Democratic Rep. Joaquin Castro said that over the hours that the Capitol was under siege, the president refused to say what was needed to stop the attack and “the insurgents were following his commands.”

See Plaskett’s full presentation below. Note that the video contains profanity and violence.

Reaction from senators about the threat

Maine GOP Sen. Susan Collins called the presentation “riveting,” and she was among many who used the same term. Pool reporters inside the chamber indicated that it was tense and quiet and most senators were glued to the monitors, some with outward signs of shock, like shaking their heads or wincing.

Many admitted it was an effective presentation that provoked emotional responses. Sen. Lisa Murkowski, R-Alaska, said she was “angry” and “disturbed” after seeing the video.

Rep. Eric Swalwell, D-Calif., showed video of Senate Majority Leader Chuck Schumer going down a hallway only to be turned around quickly with his security detail to avoid demonstrators who roamed the building.

See the footage of Schumer below. Note that the full video contains profanity and violence.

The acoustics in the Senate chamber as the video played made it easy for senators to hear the audio clips from the police radios that revealed the frantic calls for backup.

Ohio GOP Sen. Rob Portman said it was “not easy” to relive that day. But he also admitted that senators had believed they were secure, and “based on the footage, maybe not as protected as we thought we were. But at the time, people — I mean, I think very few of my colleagues felt that they were in danger.”

Sen. Lindsey Graham, R-S.C., told reporters, “I just can’t believe that we could lose the Capitol like that. I got mad. I mean these police officers had every right to use deadly force, they should have used it.”

Sen. Elizabeth Warren, D-Mass., said it was “hard to watch” the images showing people who were “terrified” and “then to try and make eye contact with Republicans who just wanted to look off.”

Colorado Democratic Rep. Joe Neguse focused his argument on saying that there was evidence that would show that Trump provoked the attack and helped spark the actual attack with his speech.

Neguse quoted from criminal indictments of Proud Boys who said they would have killed Pence if given the chance. The managers showed multiple tweets from Trump pressuring Pence to interfere with the electoral vote count, as well as video of rioters in the Capitol chanting to “hang Mike Pence.”

Rep. Ted Lieu, D-Calif., discussed the failed efforts from the White House to pressure the Justice Department to intervene in the election. He asserted, “Donald Trump ran out of nonviolent options to retain power.”

Another manager, Rep. Madeleine Dean, D-Pa., noted that Trump used the word “peacefully” one time in his speech to his supporters the morning of Jan. 6 — a point his defense team used to argue he was not inciting violence. But Dean said the managers analyzed the same speech, and he used the words “fight” or “fighting” 20 times.

Murkowski, who voted with Democrats to say the trial was constitutional, told reporters that “House managers are making a very strong case for a timeline that laid out very clearly the words that were used, when he used them, how he used to really build the anger, the violence that we saw here in this Capitol.”

But Indiana Republican Sen. Mike Braun, said during a break, “I don’t know that that’s going to make a difference for any one senator just having it on a loop again.”

Texas GOP Sen. Ted Cruz, a former solicitor general, maintained that the presentation focused on those who should be prosecuted, but didn’t link clearly to Trump. “They spent a great deal of time focusing on the horrific acts of violence that were played out by the criminals, but the language from the president doesn’t come close to meeting the legal standard for incitement.”

Other Republicans took a different view, but it’s unclear whether it would be enough to move any of them to vote to convict Trump. South Dakota Sen. John Thune said about the impeachment managers, “I think they’ve done a good job connecting the dots and, you know, the president’s Twitter feed, as a matter of public record and they, you know, I think I said an effective job of going back several months and just showing that public record.”

Sen. Chris Coons, D-Del., said he was hopeful that the power of the managers’ arguments was changing some minds. The Democratic caucus would need 17 Republicans to vote with them to convict Trump, a hurdle that few believe is within reach, especially since just six voted on Tuesday to say the trial itself was constitutional.

“I believe there are more Republicans open to conviction than is publicly clear at this point. But I don’t know what the path forward looks like,” Coons said, noting his belief was based on his conversations with colleagues across the aisle.

But the lack of any independent investigation apart from press reports widely circulated before the trial, and the unlikely prospects that witnesses will be called, makes it hard for the managers to build a fresh body of evidence that might be needed to sway more GOP senators to break with Trump, still viewed as the de facto leader of their party.

The impeachment managers have another day, and up to eight additional hours to continue prosecuting their case. Aides to the managers told reporters that the team was not planning to use the full time, and they did wrap early on Wednesday evening.

Raskin said their intention over the course of the two days is to show that “to us, it may have felt like chaos and madness, but there was method in the madness that day.”

On Thursday they are expected to discuss the toll the attack took on lawmakers, staff and law enforcement. They could also use additional internal security camera footage that has not been seen before. Aides stressed that the managers’ case “will build, each piece building on the other.”