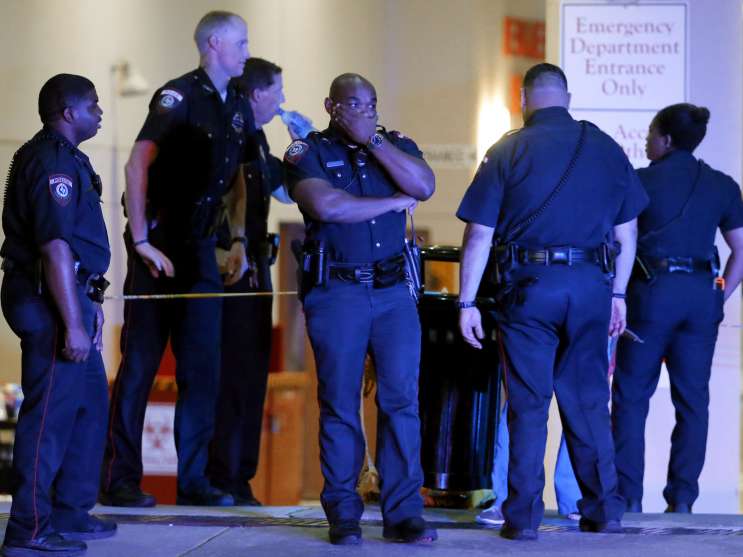 A Dallas police officer covers his face as he stands with others outside the emergency room at Baylor University Medical Center in Dallas. Snipers opened fire on police officers Thursday night, killing some of the officers.
Image credit: Tony Gutierrez

A sniper attack in Dallas killed five police officers Thursday, in a bout of violence that didn’t end until a sniper who had fired on police died in a parking garage. Police say at least four people were involved in the attack and that they have three suspects in custody.

It remains unclear how many people might have been firing upon police. Friday morning, federal officials told NPR that the gunman who died in the parking garage was named Micah Xavier Johnson.

In addition to the five officers who were slain, seven were wounded in the shooting that began just before 9 p.m. local time, at the end of a downtown protest march that was held to condemn two police killings of black men in other cities earlier this week.

Two civilians were also wounded in the attack, Dallas Mayor Mike Rawlings said Friday morning. He refused to give details about suspects in the case, citing the active investigation.

Police believe the suspects took elevated positions in a parking garage so they could “triangulate” their attacks and inflict harm on as many officers as they could, at what had been a peaceful event.

“There are no words to describe the atrocity that occurred to our city,” Dallas Police Chief David Brown said Friday morning. “All I know is that this must stop, this divisiveness between our police and our citizens.”

Here’s what we know about the situation. We’ll be updating this post as more news comes in:

The gunman who was killed is Micah Xavier Johnson, two federal law enforcement officials briefed on the investigation tell NPR.

Police have three suspects, including one woman, in custody; another suspect died after an hours-long standoff with police at a parking garage at El Centro College in downtown Dallas.

Police Chief David Brown said the suspect told negotiators “the end was coming,” that he’s “going to hurt and kill more” law enforcement, and that there were bombs planted all over the garage and downtown.

Just before dawn Friday, police said their sweeps for explosives had turned up no such devices.

During negotiations with police, the suspect spoke about his motivations, Police Chief David Brown said at a Friday morning news conference.

“He was upset about Black Lives Matter,” Brown said, adding that the man cited the recent killings of black people and said that he wanted to kill white people — particularly white police officers.

The three suspects who are in custody have not been cooperative, Brown said.

The men were picked up in a traffic stop, after someone saw them flee the scene in a Mercedes. The woman was taken into custody in a parking garage, where the fourth suspect was in a standoff with police.

Another man whose picture had been circulated as a possible “person of interest” in the case turned himself in and was later released; Dallas police had posted a picture of the man in a camouflage T-shirt, carrying a long gun.

Hundreds had gathered for the Black Lives Matter rally and march, which was coming to a close just before 9 p.m. CT when the snipers’ gunfire cut through the air.

“They were targeting the police,” NPR’s Wade Goodwyn reports for Morning Edition. “They let the protesters pass by and started shooting the police.”

Part of the gun battle that ensued was captured on a Facebook live stream. We’ll warn you that it includes images and language some may find disturbing:

Police believe the shots came from an “elevated position,” targeting officers who had been helping secure the rally.

In addition to those officers, many of the police who were trapped at the scene were in their patrol and bike uniforms.

For minutes afterward, gunfire echoed through the city’s streets. Police said they believed two snipers were responsible for the gunfire. A gunman in a parking garage exchanged fire with police for 45 minutes, according to the Dallas Morning News.

A standoff then ensued, which ended when the suspect was killed just before 3 a.m. local time. Police Chief Brown says the department used a “bomb robot” to place a device “where the suspect was” and detonate it — a move that he said was made to prevent any further risk to police officers.

“Our profession is hurting. Dallas officers are hurting,” Brown said Friday morning. “We are heartbroken.”

To read profiles of the victims, see our separate page.

One of those slain has been identified by Dallas Area Rapid Transit, or DART, as transit officer Brent Thompson, 43, who had joined the agency in 2009. He is the first officer killed in the line of duty in DART’s history.

DART also released the names of three injured officers who are expected to recover. They are Omar Cannon, 44, Misty McBride, 32, and Jesus Retana, 39.

Most of the officers who were injured last night have now been released from medical care, Brown said, while some still need more treatment.

We’re awaiting word of the identities of others who were killed or wounded in Thursday night’s attack.

Protester Wyatt Rosser, who was close to the front of last night’s march, told member station KERA about his experience:

“The Black Lives Matter rally … started out as what was, to me, the biggest and most inspiring rally I’ve been to in Dallas. The speakers were great and everything was peaceful and beautiful until the end of the march. … There were really beautiful speakers, a lot of great things were said, and it felt really unifying and we were all standing in solidarity, and that happened, and everyone just scattered and we broke apart. That was probably the most intense and disheartening thing for me, how symbolic it was being linked in arms, feeling this really strong moment and then hearing gunshots, and then everything just fell apart.”

Jeff Hood, one of the organizers of the march, said it was always intended to be nonviolent, and that the attack was “not the work of peaceful protesters. This was the work of people who had planned this out very much in advance.”

He witnessed the shooting and described the events to NPR:

“We marched and certainly everything was peaceful. The police were commenting on how peaceful and nonviolent it was,” he says. Then, close to the end of the march, Hood was talking to a police sergeant when he heard gunshots.

“At first I didn’t know what had happened,” he said. “Once I realized what had happened I was close enough to where I was rubbing my stomach and rubbing my chest because I thought it was possible that I had been shot. The sergeant ran toward the shooting and I knew that I had over 800 people behind me that I was responsible for, and so I was carrying a black wooden cross and that wooden cross instantaneously became a shepherd’s crook. I was screaming, you know, ‘Active shooter, active shooter, out of the way … run, run, run!’

“It’s just devastating that these five officers have lost their lives, that they won’t be going home to their families this morning. I am devastated, I am angry, I am frustrated,” he said.

In addition to the local and FBI investigation efforts, the Bureau of Alcohol Tobacco and Firearms says it has some 30 personnel on the scene.

“Our K9s and Explosives Enforcement Officers are continuing to conduct explosives sweeps for the safety of the public,” a spokesman in Dallas tells NPR’s Carrie Johnson. “This is the initial stages of a what we expect to be long investigation. We are not disclosing any firearms information at this time.”

Police have closed off around 15 blocks of downtown as their investigators work Friday, and they’re unsure when the area will be reopened.

A number of downtown office buildings are closed today. They include Dallas County administration buildings, courts and museums.

“Everyone is just stunned, beyond belief,” reports NPR’s John Burnett, who was born in Dallas.

Dallas is in mourning, reports NPR’s Wade Goodwyn, who’s based in the city:

“Last night was just devastating for the city of Dallas. You know, it’s taken us 50 years to get over the charge that we are the city of hate, after the Kennedy assassination. And there were some strange similarities. This shooting happened about two blocks away from where the president was killed. Lee Harvey Oswald knew the parade route, and picked an elevated position from which to attack. Police now believe that these snipers knew the protest route — and they took an elevated position from which to attack.”

And in both cases, Wade says, the effects were devastating.

President Obama called it “a vicious, calculated and despicable attack on law enforcement,” in remarks delivered at the start of his trip to Warsaw, Poland.

Saying that he had spoken with Dallas Mayor Mike Rawlings, Obama said, “I believe that I speak for every single American when I say that we are horrified over these events, and that we stand united with the people and the police department in Dallas.”

Obama added that while the “twisted motivations” of the attackers will surely emerge, “there is no possible justification for these kinds of attacks, or any violence against law enforcement.”

The president added that the FBI is in contact with Dallas police about the case.

In a separate news conference, Attorney General Loretta Lynch said, “Those we have lost this week have come from different neighborhoods and backgrounds – but today, they are mourned by officers and residents, by family and friends – by men and women and children who loved them, who needed them and who will miss them always.”

Toward the end of her address, Lynch said:

“And to all Americans: I ask you not to allow the events of this week to precipitate a ‘new normal’ in our country. I ask you to turn to each other, not against each other as we move forward. And I urge you to remember, today and every day, that we are one nation. We are one people.”

This is a rapidly developing story; we’ll provide updates as they become available, including corrections should any of the above information prove to be incorrect.