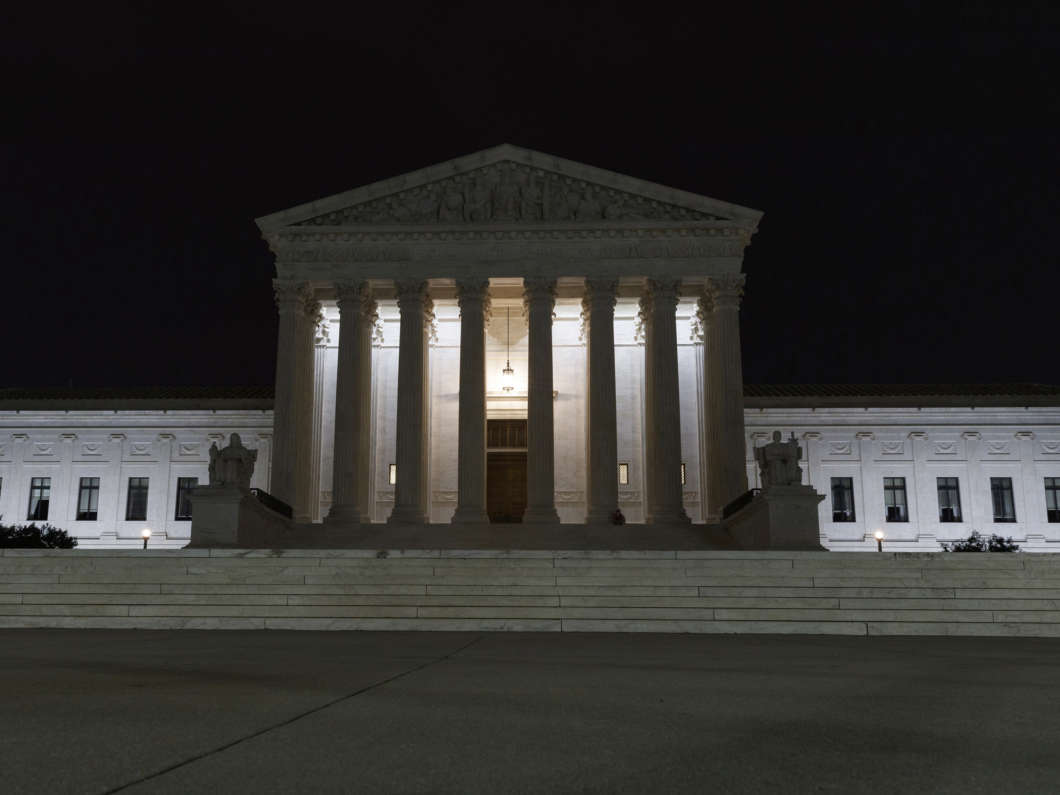 The Supreme Court hears arguments Tuesday in a case testing the legality of the DACA program.
Image credit: Carolyn Kaster

The U.S. Supreme Court hears arguments Tuesday in a highly anticipated set of cases that threatens the legal status of some 700,000 young people — often called “dreamers” — who were brought to the U.S. illegally as children. It’s a program that President Trump tried to rescind seven months after taking office, only to have the lower courts block his action.

In 2012 President Obama put the program in place to temporarily protect these young people from deportation. If you were in school, were a high school graduate, or had been honorably discharged from the military, and if you passed a background check, you were eligible for temporary legal status and a work permit, renewable every two years. The program is formally known as the Deferred Action for Childhood Arrivals, or DACA.

President Trump, from the beginning, seemed conflicted about DACA, caught between the mass deportations he promised his political base during the campaign, and his admiration for what so many of the “dreamers” have accomplished.

These DACA recipients, who come from around the world, have become teachers, psychologists, business owners, and doctors.

Their successes illustrate the reason that Republicans and Democrats in Congress tried to work out a DACA deal that Trump would sign in 2017. “Rest easy,” Trump told the “dreamers” in an April 2017 interview with the Associated Press.

Trump “kept waffling back and forth”

At the end of the day, Trump’s indecision was so frustrating for Senate Republican leaders that they worked out a compromise with Democrats on their own. Just hours before the deal was to come up for a vote on the Senate floor, however, the administration branded it unacceptable in a midnight press release, according to Hirschfeld.

Shortly thereafter, Attorney General Jeff Sessions announced the DACA program would end because, he said, it was illegal and unconstitutional to begin with.

“They are dead wrong when they say that the DACA program adopted by the Obama administration was illegal,” says Ted Olson, who served as solicitor general in the George W. Bush administration and is representing DACA plaintiffs in the Supreme Court.

Olson points to programs similar to DACA that were put place by every other president dating back to Dwight Eisenhower. These programs granted temporary legal status, for instance, to 600,000 Cubans in the 1950s and ’60s and 1.5 million other undocumented immigrants under another program in the Reagan and George H.W. administrations.

Janet Napolitano was secretary at the Department Homeland Security when DACA was created. “Not only is there a long history of deferring action for particular groups under the immigration laws,” says Napolitano, “but there’s the whole concept of prosecutorial discretion, which gives the executive branch the authority to make decisions about who is going to feel the full brunt of the federal government in an enforcement proceeding, versus not.”

Prosecutorial discretion vs. “complete suspension of the law”

“The Supreme Court has long recognized that there may be a line between prosecutorial discretion, not enforcing the law in every instance, and a complete suspension of the law,” counters John Eastman, a constitutional law professor at Chapman University who has filed a brief siding with the Trump administration in the DACA case.

Napolitano replies that granting temporary legal status to DACA recipients enables them to work, and when they work, they must pay into Social Security and pay taxes.

Indeed, government statistics indicate that some 91% of DACA recipients have jobs, allowing them to support their families and generating, over a 1-year period, nearly $60 billion in federal tax revenue that the government stands to lose if the DACA program is abolished.

Is this illegally arbitrary?

Napolitano is no longer DHS secretary. She is the president of the giant University of California system, including 1,700 students with DACA status. And in that capacity, she is challenging Trump’s revocation of the DACA program as so arbitrary and unsupported by stated reasons and data, that the revocation is itself illegal.

“If they had done a full policy review and had set forth all their reasons and demonstrated that they had weighed the pros and cons and just came to a different conclusion, they might be able to prevail in this case,” says Napolitano. “But they didn’t do that. Instead they just simply issued basically a one-sentence order that said since DACA is illegal or was illegal, we’re going to undo it.”

Sometimes lost in all the legal discussion are the people whose lives will be affected by the Supreme Court’s decision in the DACA case. DACA recipient Mitchell Santos Toledo, brought to the U.S. when he was 2 and now in his last year at Harvard Law School, remembers crying when he received his Social Security card. “This is home for us. It’s not a place I call home. It is home,” he says.

A first-of-its kind-video friend-of-the-court brief filed by United We Dream seeks to highlight other DACA stories. “We got DACA and it’s like we got wings. I am a mom, a wife, and a business owner,” says Angelica Villalobos, who owns an auto repair shop.

“I worked on a project that won two Grammies, ” says Emmanuel A. “I did some field work picking strawberries. I decided to become a teacher so that students could have that role model,” says Maricruz R.

Public support for DACA is illustrated by a distinct imbalance in friend-of-the- court briefs filed in the case. Six have been filed supporting the administration’s position. They include briefs filed by conservative organizations and individuals, and a brief filed by 12 Republican-dominated states.

A total of 35 briefs have been filed in support of DACA. Among them are briefs filed by higher education associations, health professionals, and even briefs filed by more than 145 corporations and business organizations arguing that if the court were to side with the Trump administration and abolish DACA, their companies and industries would be significantly disrupted.

A decision on DACA is expected by summer, just as the 2020 election is kicking into high gear. Republicans in Congress may be hoping that the high court will let them off the hook, and rule in favor of DACA.

Whether the current Supreme Court, dominated by conservative justices inclined to defer to presidential power, fulfills those hopes, however, remains to be seen.