Cut Off From The World, Puerto Ricans Search For A Ghost Of A Signal 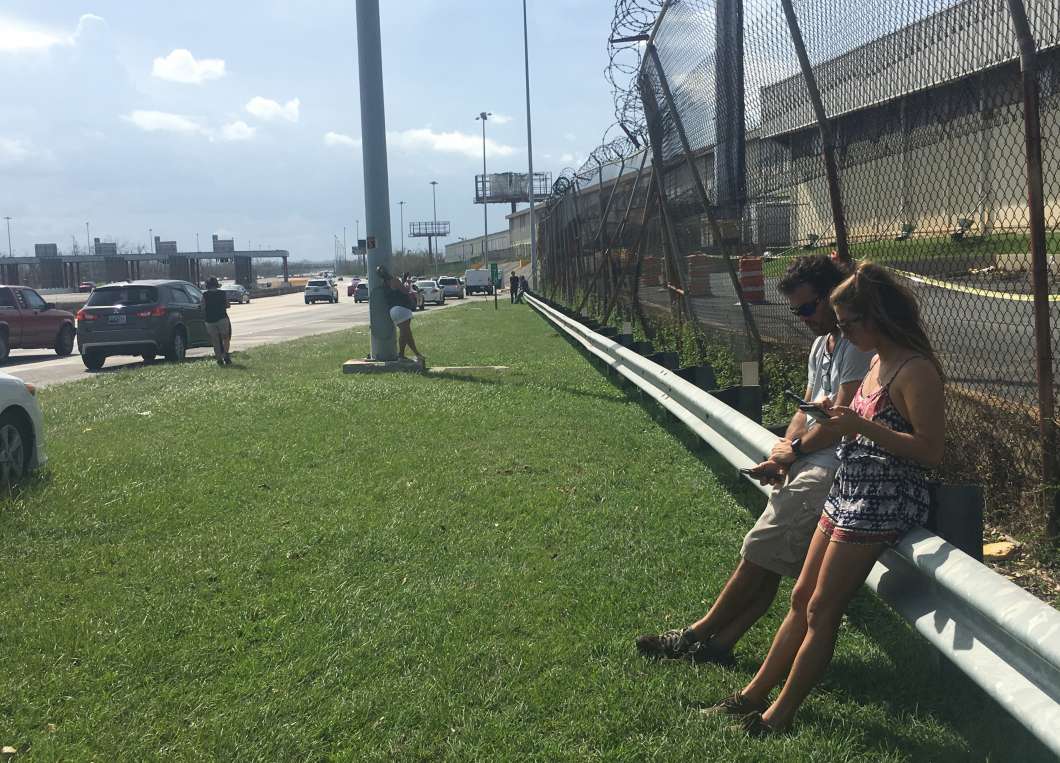 On the side of a busy expressway in northern Puerto Rico, dozens of cars stand in a line, parked at careless angles off the shoulder. Drivers hold their phones out of car windows; couples walk along the grass raising their arm skyward.

This is not a picturesque stretch of road. It’s about 90 degrees out, and the sun is beating down relentlessly. All you can hear is the rumble of cars and trucks passing by, sometimes dangerously close. Then, inside a Ford Escape near the edge of the highway, Casandra Caba exclaims, “Look!”

Smiling, she holds up her iPhone screen, showing an alert from the messaging app WhatsApp. “I just got a message from a cousin in the Dominican Republic.”

Hurricane Maria destroyed large swaths of Puerto Rico’s infrastructure when it hit the island last week. Among other things, it wiped out cell service. The island was totally incommunicado — but signals are starting to trickle back in some places, like this stretch along Expressway 22 on the island’s northern side.

Caba, her husband and her two children live about 20 minutes from San Juan. They came here for a signal after they noticed the line of cars on the side of the road, and wondered what everyone was doing.

“We parked and realized that we could make phone calls,” says Caba’s husband, Samuel Garcia. They still haven’t been able to contact relatives elsewhere on the island — and with gas shortages, they aren’t able to make the drive across the island to check on them. But at least they’re able to connect with family abroad.

Naomi Soler and her mom Damaris Varela only wish they had such luck. They drove for about an hour from Arecibo, in the mid-northern part of the island. Neighbors told them they could find a signal on Expressway 22, and they were hoping to call relatives on the mainland — in Florida, New York City, Rhode Island, Maryland.

“I’m trying to reach my dad, my grandmother and my boyfriend, but we don’t have any signal,” says 26-year-old Soler, with a tinge of frustration in her voice.

Sitting in their car in the unrelenting heat, they’re at a loss for what to do — they’ve been sitting here for about two hours with no signal. “It’s fruitless,” says Varela.

Marco Dorta, 48, and his daughter Patricia, 21, were also out of luck as they sat on the edge of the expressway.

They’d driven from Isabela, an hour and a half away, to try to find a signal. They, too, wanted to get in touch with relatives and friends in the states, to tell them they were OK, and to let them know what supplies they most desperately needed.

“All we need is one contact,” Marco Dorta said. “They’ll tell everyone else.”

But after an hour of trying different spots along the highway — with three different phones, on three different networks — they were still without reception. Asked how long they’d be willing to wait, Dorta just gave a patient shrug.

Jose Nieves, who also lives in Arecibo, got lucky — after giving up. He was driving along the interstate searching for a signal to get in touch with his mother in the city, an hour away. But he never could make that call, so instead, he drove all the way to see her in person.

On his way home, “I just caught a signal, and I just parked,” he said, pantomiming a squealing stop on the side of the freeway. He had his first phone call since the storm began — a brief chat with a friend and business partner in Las Piedras, in the mountains — before the call dropped.

Nieves said clusters of cars like this one dot the freeway between San Juan and Dorado, 15 miles to the west of the capital.

Beyond that, he says, “there’s absolutely no hope for a signal,” he said. “You’d be dreaming if you think you are going to get something.”

“But, you know, faith is the last thing you lose,” he said.