Cuba Without A Castro: The Island’s Old Guard Exits The Stage 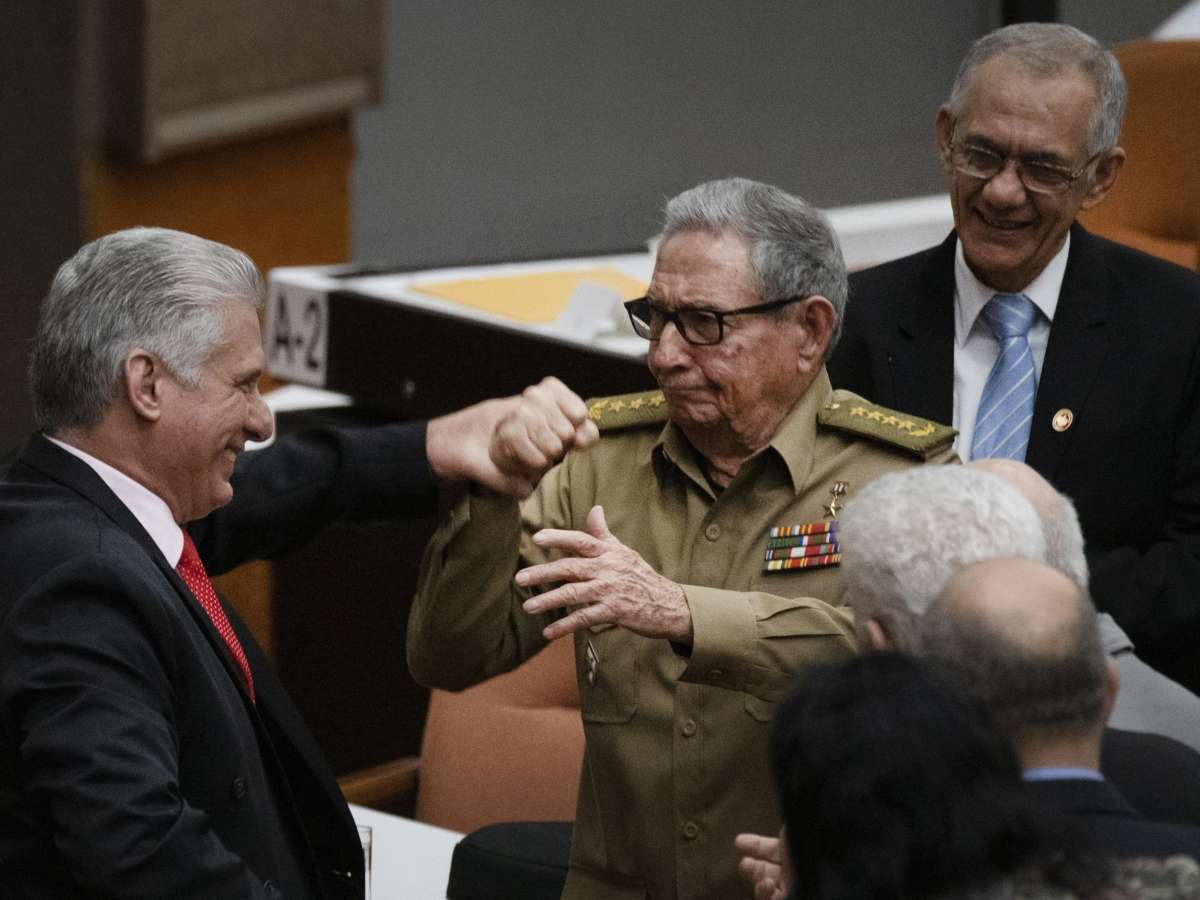 Raul Castro, first secretary of the Communist Party and former president, clasps hands with Cuban President Miguel Diaz-Canel during the closing session at the National Assembly of Popular Power in 2019 in Havana.
Image credit: Ramon Espinosa

A generation of Cuban revolutionaries who seized power more than six decades ago, directly challenging the U.S. and later pushing Washington and Moscow to the brink of nuclear war, is set to exit the stage.

At a party conference that started Friday, 89-year-old Raul Castro, the brother of the late revolutionary leader Fidel Castro, is widely expected to step down as head of the Cuban Communist Party. Three years ago, he resigned the presidency and handing the reins to a much younger Miguel Diaz-Canel.

The expected move, at Cuba’s Eighth Party Congress, would mark the first time since the 1959 communist revolution that a Castro will not hold one of the most powerful roles in Cuba’s government.

It also comes on the symbolic 60th anniversary of the failed Bay of Pigs, a CIA-led operation to use Cuban exiles in an invasion that sought to overthrow the communist regime. The following year, American spy planes discovered evidence that Soviet-supplied nuclear-armed missiles were being installed on the island — leading to a showdown between the U.S. and U.S.S.R. that many historians regard as the closest the superpowers ever came to a full-scale conflict.

But those events will likely dim as the country’s “historic generation,” as many Cubans refer to the old-guard, also fade. On Friday, Castro’s long-time deputy, 90-year-old José Ramón Machado, is also expected to step down, leaving the 17-member Politburo without any revolutionary veterans.

Many Cubans who don’t remember a time when a Castro wasn’t running their daily affairs are nervous about the future, especially since the transition comes as the country appears to be at a crossroads.

Following the end of the Cold War, Moscow’s patronage all-but dried up, leaving Cuba to find new benefactors. After a glimmer of rapprochement between Havana and Washington during the Obama administration, the Trump White House did an-about face, imposing U.S. sanctions.

The sanctions — together with the loss of support from Venezuela and spiraling inflation — has brought a return to food shortages not seen since the 1990s. More recently, the isolated Communist government has had to face the coronavirus pandemic, which, among other things, has meant going it alone on vaccine development.

President Biden has said he wants a reset on Cuba policy, but so far has offered few details on how his administration will handle the perennially thorny issue.

After Raul took over for his brother in 2008, he brought big economic changes to the island – expanding private enterprise, ushering in the use of cell phones, allowing access to the Internet and seeking more relaxed relations with the U.S.

But since then, reforms have mostly stalled, says Ted Henken, a Cuba specialist at Baruch College in New York.

The government, he says, is “very cautious because they know that economic freedom can lead to political freedom and loss of political control.”

Authorities have also failed to overhaul bloated state-run companies and government agencies that most of the population rely on for income.

“Laying off a lot of people could lead to social and political problems,” William LeoGrande, an American University expert on Cuba, tells The Associated Press.

LeoGrande also points to growing inequality in a system that promised Cubans precisely the opposite.

“Back in 1990s, there was a sense that we’re all in this together,” he said. “Today, the inequality is not only worse but it’s also more manifest.”

The island’s economy contracted 11% last year, even as Diaz-Canel broadened private enterprise, allowing Cubans to run almost any small business from their homes for the first time.

The economic disarray is fueling political discontent, with historic protests in Cuba, fueled in large part by the access to information from the outside world via the Internet. The emergence of a new artist revolt, started by Afro-Cuban rappers before widening to mainstream artists, is particularly astonishing.

But despite the unease, there are no signs that the end of the Castro era brings Cuba any closer to the end of Communist rule, says Arturo Lopez-Levy, a Cuba expert at Holy Names University in California.

“This is not a family a business, it is more sophisticated and more resilient than a government that is part of a same clan or a family,” he says.