Crop-Protecting Fungicides May Be Hurting The Honey Bees 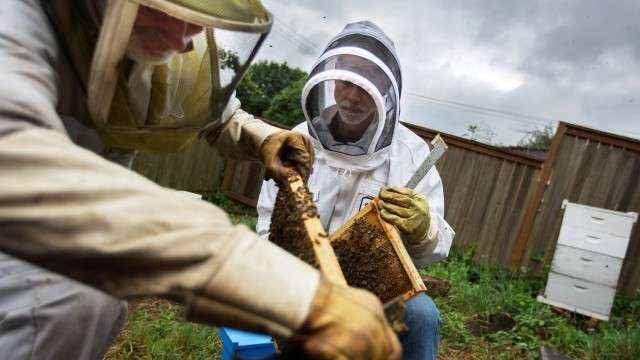 You know those nasty brown spots that can ruin an otherwise perfectly delicious apple? Those spots and other problems — like blossom blight and yellow leaves — are often caused by fungi. Apple growers usually fight back with fungicides, but a new study has found that those fungicides could be hurting honey bees.

“The long-standing assumption is that fungicides won’t be toxic to insects,” says May Berenbaum, an entomologist at the University of Illinois Urbana-Champaign.

But Berenbaum and her colleagues found, in a study published Monday by the Proceedings of the National Academy of Sciences, that fungicides can harm bees by making it harder for them to metabolize their food. If bees can’t get energy from their food, they can’t fly.

The study sheds new light on what appears to be the latest of many threats scientists have identified as they try to understand why honey bees and other pollinating insects have been dying off. Over the past decade, bees that farmers and gardeners rely on to pollinate plants have been dying in unprecedented numbers.

Researchers have scrambled to figure out what’s killing the bees, and they’ve identified some factors — including pesticides aimed at killing insects, reduced forage plants, and bee mites and other diseases.

Berenbaum says the takeaway is that “every kind of pest management approach can have unintended consequences.”

Unlike other kinds of pesticides, fungicides are largely unregulated in many states.

This story comes to us from member station KUOW and EarthFix, an environmental journalism collaboration led by Oregon Public Broadcasting in partnership with six other public media stations in Oregon, Washington and Idaho.