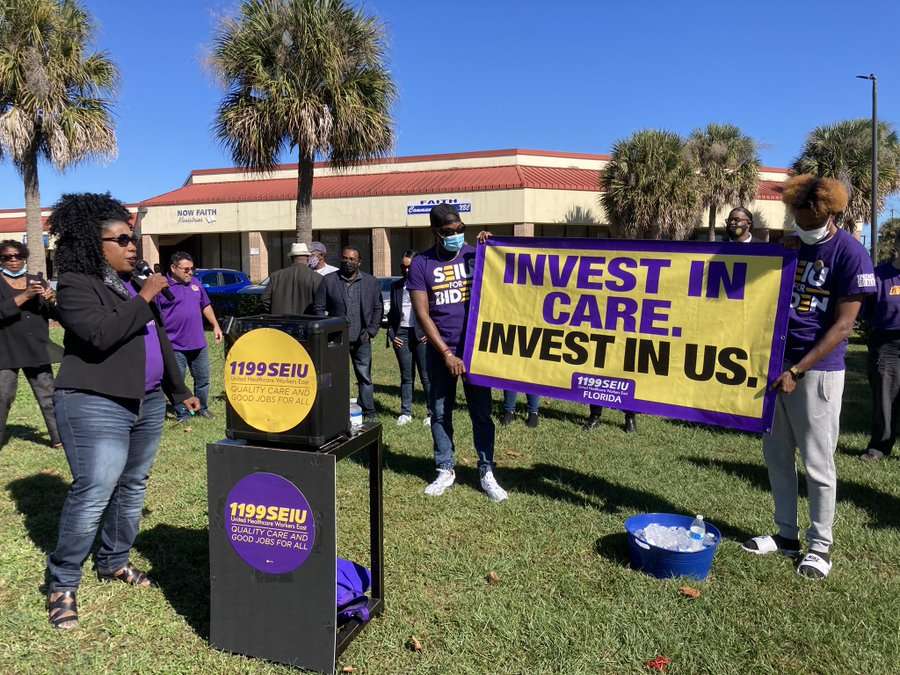 Lisa Machamer was frustrated trying to get in touch with staff at the memory care facility where her 96 year-old mother was living in Sarasota this spring. Machamer lives in Ireland, and when she finally did get a chance to visit, she saw firsthand how a statewide staffing shortage was affecting her mother.

“Her bathroom smelled terrible, they [staff] didn’t get rid of the trash,” she said. “It’s very frustrating, you know when you go into these places and it’s the basic things, like the housekeeping,” Machamer said. “And the shortages meant she wasn’t being walked. I mean their idea of an activity was sitting her in her walker or a chair and watching television.”

Administrators told Machamer they didn’t have the staff. Florida’s nursing homes are struggling with workforce shortages at a time when their resources are already stretched thin due to the pandemic.

Machamer could see her mom was deteriorating and eventually moved her out of that facility into a new one. She said her mother is doing better, but said she has one caregiver who is juggling eight other patients.

“I mean even now at this new place, you know Sundays and Wednesdays are showering days, and last week they forgot,” she said. “So you have to be diligent, you have to be on them and you have to be over at these facilities almost literally all the time to see, really, what’s going on.”

Machamer acknowledges most staff are doing the best they can given the workload they have and often low pay they earn. But she said it’s not enough. She recently hired outside help to spend time with her mom after she goes back to Ireland.

A survey from the Florida Health Care Association published in August found 92% of long-term care facilities in the state faced significant staffing challenges, with more than half saying they have had to reduce admissions as a result.

The nursing center staffing crisis is REAL and it’s taking a toll on our caregivers and residents. The Legislature must act quickly to help – before it’s too late. pic.twitter.com/tcjUnY8WS4

State legislators are looking for solutions to the problem. One proposal, filed by Republican Sen. Ben Albritton, of Bartow, would slash the hours licensed nurses have to spend with patients and allow time spent with therapists or activities directors to count towards the requirement.

Machamer said if that helps keep her mom engaged throughout the day she’s all for it.

“Better to have people that maybe aren’t as qualified to go in there and spend quality time just doing, you know, an activity,” she said.

But some in the industry say there could be problems if licensed nurses are providing less care.

The bill would cut the time that a nurse or certified nursing assistant spends with a patient from 3.6 hours to one hour. It would also permit nonmedical staff to replace CNAs for 2.5 hours every day.

CNAs who work in nursing homes across Florida reacted to Albritton’s bill with disbelief.

“I was shocked when I heard that, to tell you the truth,” said Frantz Louis, of Orlando, who has worked as a CNA for 18 years and is part of the healthcare union 1199 SEIU.

“We [nurses] need to be safe & remain safe so what we are at the bedsides where we are needed to take care of our patients.” – Scheena Tannis, RN at Brookdale Hospital on a press conference with @SenGillibrand on OSHA’s recent ETS news.

Amy Runkle, a CNA in Venice, says the idea of replacing licensed nursing assistants with other staff is dangerous.

“You need to be certified, you need to be properly trained,” said Runkle, who has worked as a CNA for 31 years and is also a member of 1199 SEIU.

Her education enables her to quickly tell if a patient is in distress, she said.

“When I walk into a room, my eyes are scanning this resident from head to toe — constantly,” Runkle said.

If someone misses the subtle clues, a patient could become ill from preventable conditions like dehydration, said Christina Chiger, a CNA in Tampa with 33 years of experience.

“You go to give somebody something to drink, and they tell you, no, they don’t want it,” Chiger said. “Okay, so we know, there’s ways to go around that.”

Sometimes it’s a matter of approaching a patient in a different way to get them to eat or drink but an untrained staff member likely wouldn’t know how to do that, she said.

“A payroll person is not trained how to take care of a patient, I’m sorry,” she said. “Social worker? They’re not, no.”

Supporters of the bill say it will help solve the critical understaffing problem.

But Louis says what the industry really needs is better pay for CNAs. His union says the average pay for nursing assistants in Florida is 12 dollars an hour.

“Some of us can work in the nursing home for about 30 years, 40 years,” he said. “And after you finished or you retired, you have nothing to take care of your family.”

The staffing tension at nursing homes in Florida dates back at least two decades.

In the late 1990s, Florida’s nursing homes faced numerous lawsuits for reasons, including quality of care and patients’ rights, until companies pushed state lawmakers for protections from lawsuits.

In 2001, the Legislature passed a bill that then-Gov. Jeb Bush signed into law, providing tort reform, but with a tradeoff: Nursing homes would need to have higher staffing standards.

“We saw significant improvements in not seeing those horrendous cases where people die of ant bites because they’ve been left unattended for days, which is progress,” said Jeff Johnson, state director of AARP Florida. “The nursing home staffing issue is one that we’ve certainly continued to follow and to advocate on because it affects the residents and it affects their families — to have the peace of mind of knowing that their loved one is being well taken care of.”

Two decades later, nursing homes are struggling to meet the staffing requirements, which the pandemic has made even worse, Johnson said.

“What we think we’re seeing happening is let’s try to change the math so that it better fits our ability to hire staff,” he said.

Nursing homes are forced to turn new residents away if they can’t meet staffing requirements. Under Sen. Albritton’s bill, that would change. Instead, they would face a fine for insufficient staffing, along with being able to count non-nursing staff toward some of the required hours.

“Our problem with that is that for those who are nursing home residents, a lot of the things that they need the most help with – the activities of daily living are things like getting dressed and eating and going to the bathroom or having adult diapers changed,” Johnson said. “And those are not necessarily things that a therapist or an activities director is hired to do or is planning to do.”

But some non-nursing staff — like mental health therapists — are providing vital care that should count, said Kristen Knapp, communications director at the Florida Health Care Association, which represents hundreds of long-term care and nursing centers.

“They’re doing and delivering that care now but they’re not counted in the staffing,” said Knapp, whose organization supports the bill. “I think one thing that COVID taught us is that we need to take a more holistic approach.”

Still, she said, if long term care facilities can’t find a way to pay their employees more, they will continue to struggle to find qualified caregivers. She described the staffing shortages as a crisis.

Some state leaders have taken notice. In his 2022-23 state budget proposal, Gov. Ron DeSantis provided more than $225 million to support higher wages for caregivers at long-term care facilities. The Legislature will debate that funding as it decides the fate of SB 804.