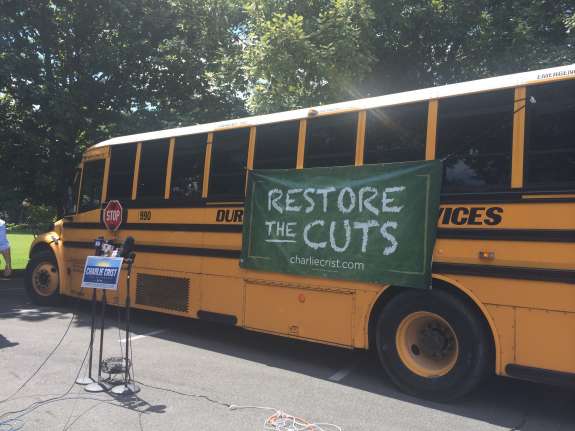 Crist arrived at Langford Park in a school bus, photo by Amy Kiley

Gubernatorial Candidate Charlie Crist is riding a school bus for his cross-state tour promoting education funding. The Democrat hopped off in Orlando Thursday.

Both supporters and opponents greeted Crist by volleying the names of their chosen candidates, but, eventually, the crowd let Crist speak.  “Rick Scott cut $1.3 billion dollars from education,” Crist said. “He cut it to the bone – inexplicable, wrong, just the wrong priorities. That’s gotta be improved.”

Governor Scott was responding to a budget shortfall when he proposed slicing education spending by $3.3 billion dollars in 2011. The Legislature allowed a cut of $1.3 billion.

Former university employee Justina Gonzalez-Marti was there to protest against Crist.  “The mess that Charlie Crist left, it was awesome,” she said. “Now, we’re operating with a surplus in the budget. The budget for education has increased, contrary to all his claims.”

It’s true Florida now has the largest money pot for education in state history, but it still lags the pre-Recession, per-pupil funding of Crist’s tenure.

Crist declined to answer a question about debating fellow Democrat Nan Rich. To take on Scott, he’ll have to get past her in the August 26 primary.