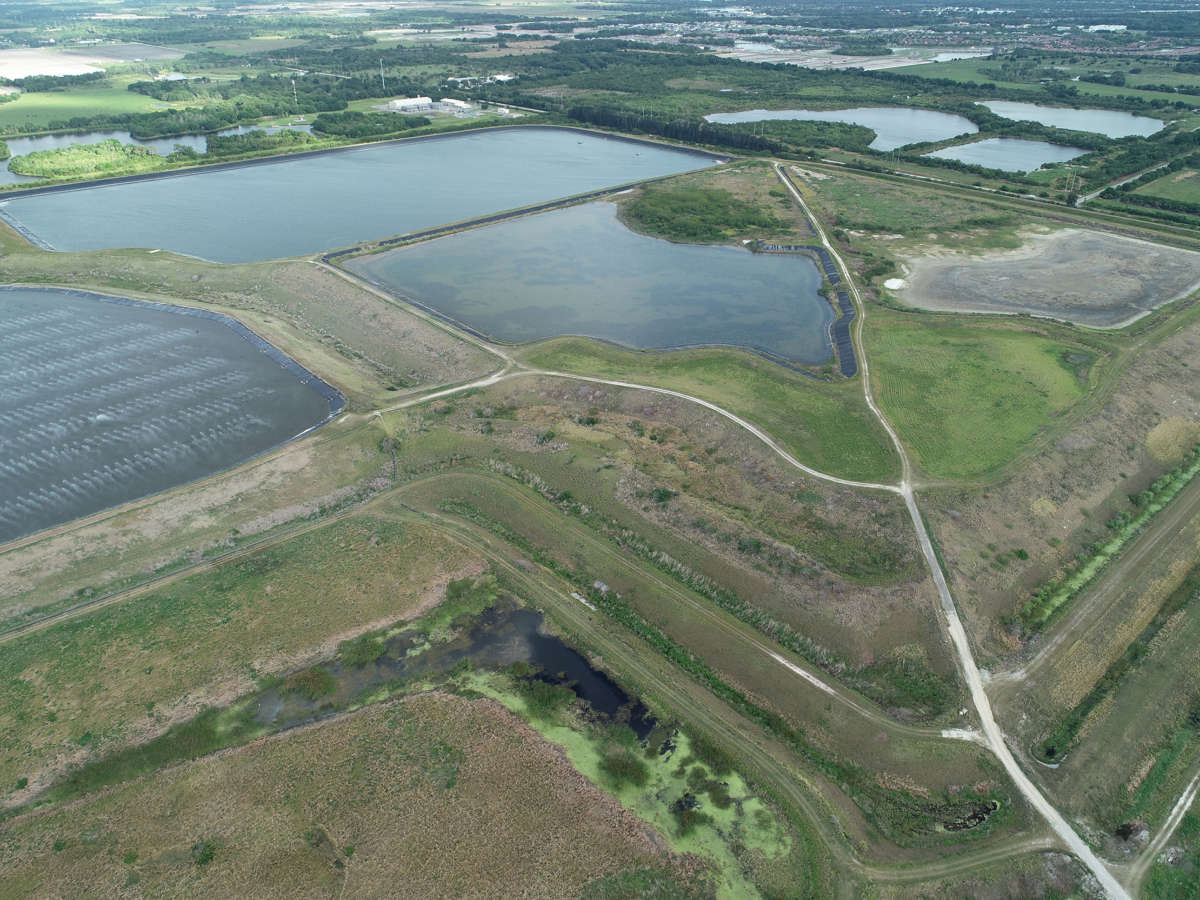 A leak at the reservoir of an old phosphate plant in Piney Point, Florida, as shown in an aerial photograph on April 3, has prompted evacuations, environmental concerns and threats of a full-fledged breach.
Image credit: Drone Base

Emergency crews in Manatee County, Fla., are using pumps and vacuum trucks to drain a leaking wastewater reservoir in an effort to prevent a full-fledged breach that officials said could unleash a “20-foot wall of water.”

The leak at Piney Point — a long-abandoned phosphate plant in the Tampa Bay area — was first discovered last month, and workers are removing millions of gallons of water from the reservoir each day to reduce pressure on its liner. Concerns over a potential breach prompted Gov. Ron DeSantis to declare a state of emergency on Saturday for Manatee County, where more than 300 homes and businesses have been ordered to evacuate.

“What we’re looking at now is trying to prevent and respond to, if need be, a real catastrophic flood situation,” DeSantis said at a Sunday press briefing. Officials said Monday that a drone may have identified a second breach overnight; engineers evacuated the site but have since returned to continue their assessment.

The leak at the former fertilizer manufacturing facility and threat of an uncontrolled breach have prompted a multi-agency response at the state and federal level. The U.S. Environmental Protection Agency deployed an on-scene coordinator on Sunday, for example, and a U.S. Army Corps of Engineers team arrived at the site on Monday.

Piney Point closed 20 years ago when its owners declared bankruptcy, WUSF’s Steve Newborn told NPR. It is now owned by a company called HRK Holdings, and still stores industrial byproducts including polluted water and stacks of phosphogypsum — a waste product that emits radioactive gas, according to the EPA.

HRK reported on March 26 that process water was bypassing the wastewater management system at Piney Point, according to Protecting Florida Together, a state-run website focused on water quality issues. Officials identified a leak in a containment wall that put the structure at risk of collapsing.

DeSantis said a “controlled release” began on March 30 at the urging of engineers, and efforts have averaged about 35 million gallons per day.

Water is being drawn by pumps from the top of the 79-ace pond to Tampa Bay, according to the county. Officials said on Sunday that the Florida National Guard was dropping off additional pumps to increase the volume of water being pumped out, in addition to the 10 vacuum trucks and 20 pumps already deployed.

Acting county administrator Scott Hopes said Monday that the additional pumps are expected to come online by the end of the day and more than double the volume of water being pumped out to between 75 and 100 million gallons per day.

There were approximately 480 million gallons in the impacted area of the reservoir on March 26, according to Protecting Florida Together. By Monday, Hopes said that number was “probably just shy of 300 million.”

DeSantis said the water being discharged is not radioactive, describing it as a mix of saltwater from a dredging project “mixed with legacy process water and stormwater runoff.” It meets water quality standards for marine waters, officials said, “with the exception of pH, total phosphorus, total nitrogen and total ammonia nitrogen.”

Matt Pasek, a geoscience professor at the University of South Florida, told NPR’s Here and Now that the water that is a waste product of phosphate is “mildly radioactive,” but said “radioactive” has a wide range of values.

“To put it in perspective, this one’s more radioactive than bananas, but not that many bananas. It’s about 20 bananas’ worth of radioactivity,” Pasek said, adding that likely does not pose digestive danger, at least in the short term.

While the state Department of Environmental Protection is monitoring the water to capture any environmental impacts, DeSantis stressed on Sunday that officials are most immediately concerned with the risk to local residents.

“Public health and safety is the priority,” DeSantis said. “Obviously we want to protect that in a way that minimizes any of the environmental impacts, but the goal is to ensure the integrity of the stack system as quickly as possible in order to minimize impacts to local residents and to prevent an uncontrolled discharge.”

Local water supplies are not in danger, state and local officials said Sunday, reassuring utilities customers that their drinking water remains safe and residents who rely on drinking wells have no cause for concern.

On Saturday, the county expanded the mandatory evacuation area around the breached reservoir, by a half-mile to the west and one mile southwest. Emergency alerts urged residents to evacuate immediately, warning “Collapse of Piney Point Stack Imminent.”

Much of the area under the evacuation order is agricultural and industrial, WUSF’s Newborn said. Officials said Monday that approximately 30 people and their pets remain in non-congregate shelters at local hotels.

Concerns have also been raised over the safety of residents at the Manatee County Jail. Hopes initially said on Sunday that all personnel and residents had been moved to the top floor of the two-story facility, putting them “well over 10 feet above base level.” On Monday, he said inmates had been safely transported to an undisclosed location nearby.

The Miami Herald reports that 267 inmates were transferred to a correctional facility in Polk County after testing negative for COVID-19, and that the remaining 721 were sheltering on the second floor. Another 200 individuals can still be transferred to another location if the need arises, sheriff’s office spokesman Randy Warren told the newspaper.

History of problems and hopes for accountability

While crews continue working to mitigate the most pressing risks, public officials said they will soon start looking ahead to addressing the environmental impacts of the breach, holding HRK accountable and implementing a permanent solution.

Some noted that Piney Point has long posed an issue. Nikki Fried, Florida’s agriculture commissioner, said in a tweet that the situation is a “result of decades of ignoring science and scientists.”

In a Saturday letter requesting that DeSantis convene an emergency meeting of the Florida Cabinet for a briefing by the state’s DEP, Fried described “numerous, well-documented failures … of the property’s reservoir liner, including leaks, poor welds, holes, cracks and weaknesses” that existed under previous ownership and have worsened since.

“For more than fifty years, this Central Florida mining operation has caused numerous human health and environmental disasters and incidents, including evacuations from sulfuric acid leaks, deaths of multiple employees, the release of more than 1 billion gallons of contaminated wastewater, and ongoing, regular gypsum stack and reservoir leaks from poor construction and maintenance that released heavy metals and pollutants into the region’s water and soil,” Fried wrote.

This issue, Hopes said Sunday, “could have been resolved over two decades ago.”

Florida Rep. Vern Buchanan said at Monday’s press conference that he was concerned about the environmental impact of the breach, noting he had seen the area by helicopter and thought the water “spewing out … looked pretty contaminated to me.” He also said he believes the situation is impacting not just Manatee County but the entire region, noting the movement of the currents.

Pasek, the geoscience professor, said that an influx of phosphorus can cause phenomenon like algal blooms and red tide, which damage the ecosystem, kill off fish and render seafood creatures toxic.

Buchanan is one of several officials calling for HRK to eventually be held accountable for what he described as “failing over the years to properly protect the public.”

DEP Secretary Noah Valenstein said in a statement that “it is clear that this facility must be closed,” and said the department would hold the company accountable through “enforcement action.”

DeSantis said he had asked Valenstein to work with the county and use all available resources to create a permanent solution.