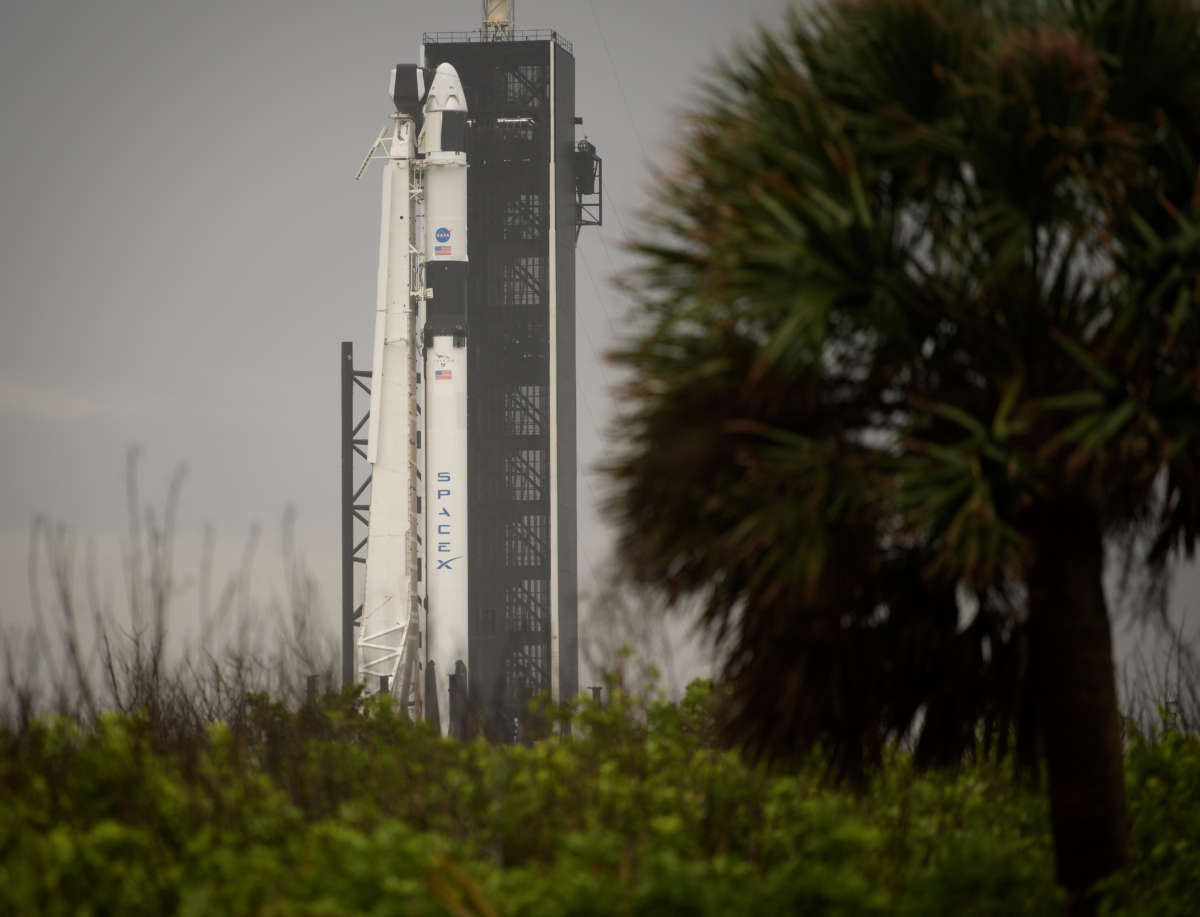 A SpaceX Falcon 9 rocket with the company's Crew Dragon spacecraft onboard is seen on the launch pad at Launch Complex 39A as preparations continue for the Demo-2 mission, Monday, May 25, 2020, at NASA’s Kennedy Space Center in Florida. Photo Credit: (NASA/Bill Ingalls)

Two NASA astronauts will have to wait until Saturday to launch from the Kennedy Space Center, after weather delayed an attempt this afternoon. When they do finally launch, it will be the first human mission from the U.S since the end of the space shuttle program in 2011, and the first time NASA astronauts are flying on a commercially built and designed spacecraft.

90.7’s Nicole Darden Creston spoke with space reporter Brendan Byrne who was at the Kennedy Space Center for the launch.

Nicole Darden Creston: Brendan, can you tell us about what stopped this rocket from launching today?

Brendan Byrne: Well, ultimately it was weather Nicole. Weather had been a factor all day here at the Kennedy Space Center. When I got here early this morning. It was raining, there were dark clouds. And it looked like it was eventually clearing up for the launch. But unfortunately, it did not clear up enough for the launch directors to go ahead and give that go for launch. We heard on the loop of the communication between these directors and the astronauts, Bob Behnken and Doug Hurley that, had they only had 10 more minutes, weather would have cooperated with them and they would have been able to launch, but unfortunately, this was an instantaneous launch window meaning it had to happen at exactly the T minus zero time. So that’s why they had to go ahead and scrub.

BB: Exactly right. You know that in Florida.

NDC: What was the mood like there at Kennedy Space Center for this this historic moment, Brendan?

BB: Well, Nicole, ever since I took over this beat I had imagined this day, right? We were talking about launching humans for a long time. And I imagined there being a lot of people, a lot of fanfare and because of concerns over coronavirus, there were not many people here. There’s not many folks in the press corps here. There’s not many VIPs that are watching the launch. And a lot of the popular watch spots around town were closed. So really a lot of people were tuned into this online to watch this event but still… the President and the Vice President were here to watch the launch attempt. But yeah, it was not the fanfare and celebration that a lot of people had had imagined this moment being.

NDC: You know, you mentioned limited people there to watch and this is such a historic moment, concerns over coronavirus sort of curtailed that ability to have the big crowds. Why did this mission still happen during the pandemic with all of that going on, Brendan?

BB: That’s a really good question. And and it’s because this mission was deemed essential. So since the end of the Space Shuttle Program, NASA has relied on the Russian space agency for rides to the station. Those rides were running out. And in fact, there really aren’t any left. So this this had to happen. Because there’s one sole occupant on the space station right now from from NASA, one sole U.S. occupant, Chris Cassidy and he needs some help working on the station up there and staffing it up. So that’s why work on this continued. Now, this was supposed to be a test flight. But it’s more than a test flight: when they do launch, Bob and Doug will spend between one and four months up there actually lending Chris a hand, kind of taking care of the station and doing some spacewalks while they’re there.

NDC: In the few seconds we have left, Brendan, how does launch weather look for Saturday?

BB: It’s much better. But as you know, in Florida, anything can change.

NDC: We’ll have to leave it there. 90.7 space reporter Brendan Byrne joining us from Kennedy Space Center. Thanks for joining us, Brendan.