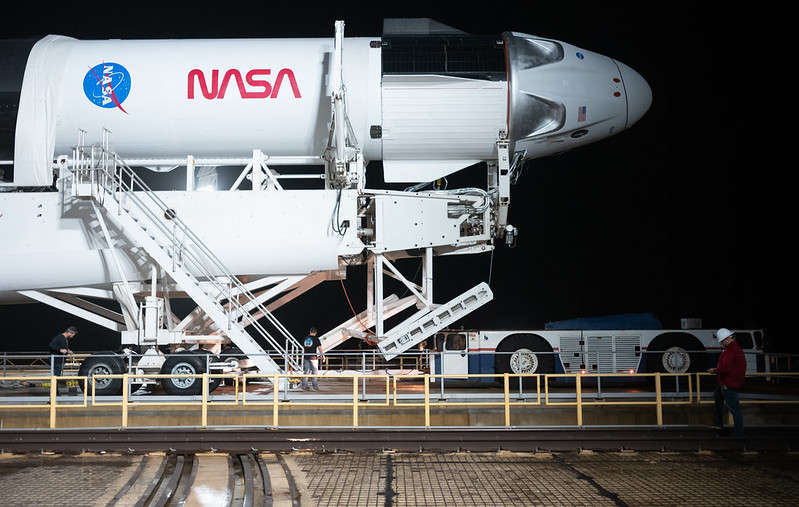 A SpaceX Falcon 9 rocket with the company's Crew Dragon spacecraft onboard is seen on the launch pad at Launch Complex 39A before being raised into a vertical position, Monday, Nov. 9, 2020, at NASA’s Kennedy Space Center in Florida. Photo: NASA

It took more than a decade for NASA to find a U.S. based ride to space after retiring the space shuttle program. NASA partnered with private companies SpaceX and Boeing to develop new spacecraft to ferry astronauts to the station.

This week NASA certified SpaceX’s Crew Dragon spacecraft for human launches ahead of a planned launch Saturday of four astronauts. “For the first time in history, there is a commercial capability from a private sector entity to safely and reliably transport people to space,” said Phil McAllister, NASA’s director of commercial spaceflight.

When Shuttle ended, NASA relied on the Russian space agency for rides to the station. The cost per seat on that vehicle was increasing, upwards of around $90 million a seat. While NASA’s partnership with SpaceX and Boeing cost about $6 billion in development contracts, the agency said working with commercial partners like this will save NASA in the long run — money it can invest in other programs, like returning humans to the moon or sending more complex space probes into our solar system.

“With commercial crew, we found another way to do the low Earth orbit mission. We spent about $6 billion for development over the last 10 years on commercial crew,” said McAllister. “That’s really amazing in my mind when you realize that the program will yield two independent human space transportation systems.”

A test flight of the Crew Dragon with NASA astronauts Bob Behnken and Doug Hurley earlier this year was a success and contributed to NASA’s certification efforts.

Boeing is still developing its crew transport vehicle Starliner. An attempt to dock an uncrewed Starliner capsule to the station late last year failed. NASA said the company will refly that test mission in the first quarter of 2021 before launching a crew of astronauts after a successful uncrewed test.