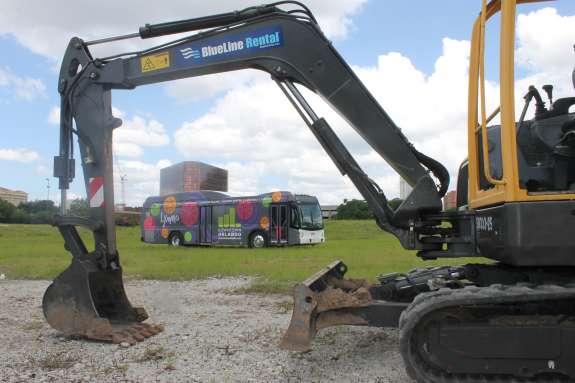 The developer of Creative Village says he will move ahead with the project for downtown Orlando even if state funding fails to materialize.  Today’s official groundbreaking was for bus service providing a link to the heart of the city.

“Since we’re ground breaking, this kicks off construction on Creative Village today, how about that,”said Dyer.

It’s also the site of a proposed University of Central Florida downtown campus, but state funding for that could be delayed – if lawmakers don’t include it in the special session in June.

“Basically our private development is teed up and ready to go but it’s sitting side by side with UCF with baited breath and waiting for the good news from the State of Florida,” said Ustler.

He said his development will still go ahead- just not as quickly.

Building on the mixed use site is slated to start next year.

That’s when the bus line is also due to start- and when it does, it will provide a boost to Parramore residents, said District 5 commissioner Regina Hill.

“Transportation is a major thing, especially here in the Parramore area where transportation for many of our residents is a challenge,” said Hill.

The Lime Line will run a two point one mile route, connecting the site of Orlando’s Creative village development with the Amway Center.