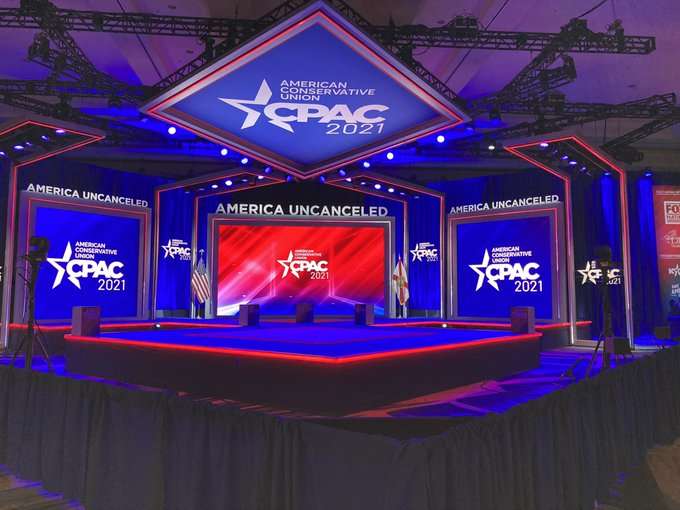 In a tweet, Rubio said he had to cancel his appearance because of an “unexpected family problem.” The conference is happening in Orlando this weekend.

The real draw of CPAC in 2021 is Donald Trump. Trump will make his first public speech Sunday since Joe Biden’s inauguration and his second impeachment trial.

Trump has been keeping a relatively low profile since he retired from the White House to Palm Beach, Florida, in January. But he still holds an outsized influence on GOP politics.

Speakers declared their fealty to the former president and attendees posed for selfies with a golden statue of his likeness. As the Republican Party grapples with deep divisions over the extent to which they should embrace the former president after losing the White House and both chambers of Congress, those gathered at the annual Conservative Political Action Conference made clear they are not ready to move on from the former president.

A woman takes a photo with the #GoldenTrump statue at CPAC in Orlando, FL on Feb. 26, 2021. Shot for @orlandosentinel pic.twitter.com/2iIEN19ifn

aren’t shying away from Trump’s baseless charges that the November election was lost because of massive voter fraud. Political junkies view CPAC as a testing ground for presidential hopefuls. Currently, Trump is dangling the idea of a run in 2024. NPR has a list of CPAC attendees considered presidential contenders, including Florida Gov. Ron DeSantis.

The conference comes as Florida’ COVID-19 figures are dropping, although there is concern about the possible rise of variants. CPAC attendees must wear a mask, according to conference organizers and county officials.