COVID Love Story: Can A Malawian Bachelor And A Dutch Bachelorette Make It? 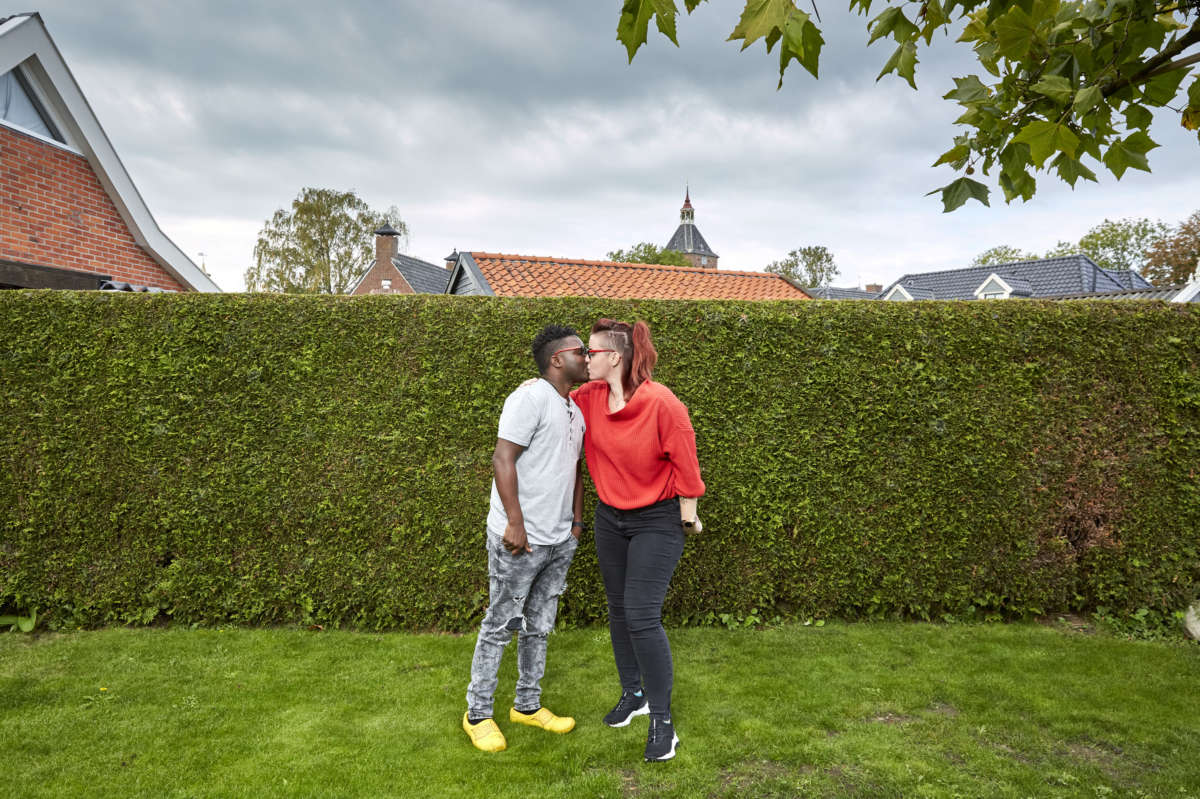 Patrick Phiri of Malawi and fiance Fiona ten Have of Holland kiss in her parents' garden. The couple met in Malawi, where they worked for the same charity, and fell in love. A 3-week visit to the Netherlands turned into 7 months due to pandemic lockdowns and travel restrictions.

On March 15, Patrick Phiri was ready to take his global romance to the next level.

Patrick, 32, lives in Malawi. His girlfriend, Fiona ten Have, is Dutch. And he was on his way to see her after nearly three months apart.

He was relieved as he waited for his plane to take off from Lilongwe Airport. It’d taken months to prepare his visa application.

And he was nervous about meeting her parents. Fiona, 27, was nervous, too.

“I really wanted my parents to like him,” she remembers, “to spend some time together so they could get to know him.”

That they did. Because of the COVID-19 pandemic, Patrick ended up staying for seven and a half months, with no job and no routine – a test of any relationship.

Fiona and Patrick met on July 1, 2019, while working for Heifer International, a nonprofit group that supports agricultural projects in some 21 countries, including Malawi. Patrick was a project coordinator, supervising officers in two districts. Fiona had just arrived in Lilongwe, the country’s capital, for an internship as an animal health specialist.

Malawi is known as the “Warm Heart of Africa,” and to Fiona this rang true. People were friendly to her, always ready to help.

She also found that her preconceptions about a country like Malawi were not entirely accurate. “The level of poverty was a real shock to me. To walk past an elderly woman or child sleeping on the street. That really broke my heart,” she says. “But there were lots of things that were the same as in the Netherlands. Roads, shops, technology. That surprised me, too.”

“After about a week, he asked if we wanted to have lunch. Then he asked for my number. He said he wanted to learn Dutch,” Fiona laughs. “I liked him straight away.”

“From the first moment I saw her, I felt different. And I loved the way she smiled and talked,” Patrick remembers. But he wasn’t yet sure Fiona felt the same way.

So Patrick took her around the city. He told her about his 3-year-old daughter, Zara, who lives with Patrick’s ex-girlfriend in Blantyre, a six-hour drive south.

He and Fiona grew closer. Their walks become longer and longer. “He was making silly jokes all the time. I really liked that.” However, Fiona didn’t know if he had a girlfriend so she remained cautious. “But once I knew he was single things went pretty quickly,” she says. “It just felt right. I knew he was ‘the one.'”

That November, a month before Fiona’s internship would be over, the two even talked of marriage.

Six months after Fiona met Patrick, she returned to the Netherlands on December 31. She moved back in with her parents while looking for work. But Fiona was keen to go back to Malawi as soon as she could. She wanted to be with Patrick.

Despite being thousands of miles apart, she and Patrick began making plans: for him to visit, to build a house in Lilongwe, to get married.

Fast forward to March 16 and Patrick’s arrival at Schiphol Airport. He and Fiona traveled to the village of Middelstum (pop. 2,419) where she lived with her parents, Aaldert and Rita ten Have.

Even though the couple had discussed marriage – there was no proposal. And Patrick had a strategy: He was going to ask Fiona’s father and mother for permission to marry their daughter and then pop the question.

Meet the Dutch parents: Patrick and Fiona with her dad and mom, Aaldert and Rita. Patrick was nervous about meeting her folks for the first time — and then ended up staying with them for months because of pandemic travel restrictions.
Julia Gunther for NPR

He thought they’d say no because he was a stranger. But Rita and Aaldert gave their permission. “They were touched by the gesture of me asking them first,” Patrick recalls. They were surprised — but supportive. “They deserve all the happiness in the world, so why not?” explains Rita.

On a windswept March 23, while walking on a nearby dike, Patrick got on one knee, took out a ring and asked Fiona to marry him. She said “yes.”

“It was one of the best moments of my life,” Patrick says.

The couple made the most of the three weeks they had planned as a couple. Since Fiona still hadn’t landed a job, they were together constantly: meeting friends and family, spending time with her folks, riding bikes, admiring tulips.’

And visiting farms. Patrick grew up on maize and tobacco farms his father managed so in some ways he felt at home in Middelstum.

But he was struck by the stark visual differences between Malawi and the Netherlands. “In Malawi, although people are very religious, there are not that many churches. Every village has a church in the Netherlands, it seems.” he says. “Also, when I arrived in March, there were no leaves on the trees. I thought the trees were all dead.”

In the background, COVID-19 was lurking. It was declared a pandemic early on March 11. Countries began closing borders and locking down. Patrick was due to return home April 3. Two days prior, Malawi announced a moratorium on arriving international flights.

Patrick began painting as a way to pass the time in the village of Middelstum, while waiting for flights to open up. After borrowing an easel from a family friend, Patrick spent the summer painting scenes from Malawi to remind him of home.
Julia Gunther for NPR

“In the beginning it was great! I thought ‘Yes! He gets to stay another week,’ ” Fiona says. Then she found a job with the local health authority, ” calling people to tell them they tested positive for COVID-19.”

Patrick spent more and more time alone. As the weeks went by, he became despondent. “It was hard because I was stuck. I could do nothing,” Patrick recalls. He found it difficult to deal with the stress, and he missed his daughter.

Fiona did what she could. “Whenever he had a bad day I would try to be there. A hug or a kiss, whatever we needed, to let each other know that we still love each other.”

Fiona was promoted, responsible for a team of health workers. She was working 50 to 60 hours a week.

And Patrick eventually found ways to keep himself busy, from doing odd jobs at her parents’ house to visiting farms to learn about their animals. He also re-rediscovered his love for painting. “I used to paint animals when I was a child. But when I grew older I no longer had the time.” Fiona found him an easel, and Patrick began painting scenes that reminded him of home. He even sold a few pieces, including a depiction of Malawi’s “Big Five” wild animals on a door that a villager commissioned.

One unexpected outcome for Patrick was the embrace of the village community: “Everyone knew my story. People would come up to me and ask, ‘How are you?'”

But it took him a while to get used to the famous directness of the Dutch. “Here people will talk about things very openly, like illness or other private experiences. In Malawi we don’t open up this much about our lives.”

On September 1, Malawi re-opened its airports for a limited number of international flights. But obstacles still loomed, from flight cancellations to a lack of funds for a new ticket.

Patrick and Fiona visit a neighboring dairy farm. Having grown up on a farm, Patrick was keen to see the milking carousel.
Julia Gunther for NPR

But on November 3, the stars aligned. Patrick flew home.

“It has not really hit me yet that he’s gone. I really miss him when I wake up,” says Fiona.

Patrick, too, is struggling with the separation: “I feel so lonely.”

The bride- and groom-to-be are excited about 2021. “I am looking forward to starting a life with my beautiful Fiona,” says Patrick. Fiona, who hopes to move to Malawi in May, looks back on their seven months together as a blessing in disguise. Her parents got to know Patrick better than they could have ever hoped for.

“Our cultures are so different, that initially caused some friction, but as we got to know Patrick, we saw what a great guy he was,” says Aaldert. Rita will miss her daughter when she moves to Malawi. “But if she is happy there, then we are too.”

Patrick feels his time in Middelstum was a transformative experience for Fiona and him. “We faced this challenge as a couple. Sure, we had our fair share of fights, but we resolved them.”

Fiona believes living together so intensely for 7 months made them stronger. “Patrick has learnt to share his emotions with me. We’ve survived and are more in love than ever.”

And for Patrick and Fiona, that’s a romantic silver lining to the global pandemic.

Nick Schonfeld is an award-winning advertising writer. In 2015, he quit his job and now divides his time between writing children’s books and working on stories about affordable health care, gender equality, education and social justice.