COVID Cases Are Surging In Michigan. Should It Get More Vaccine Doses? 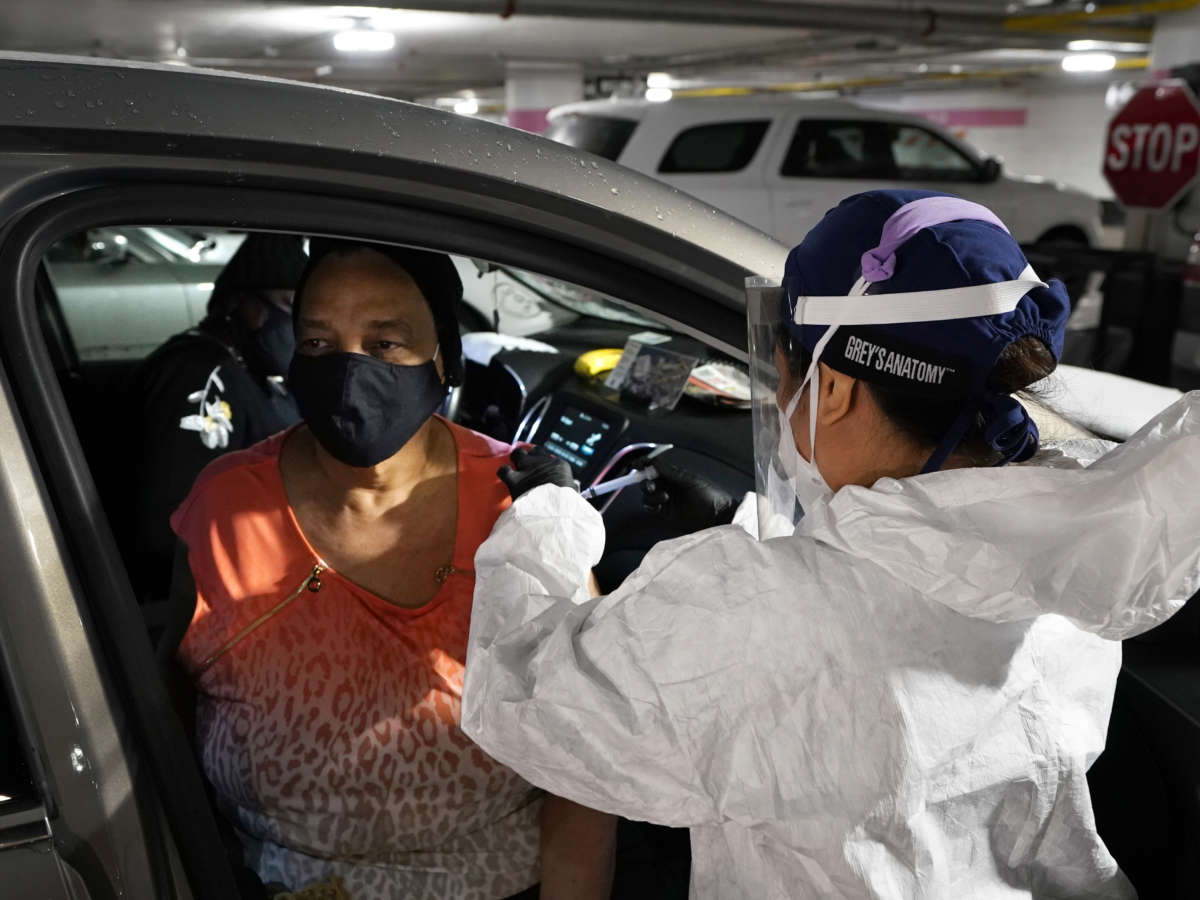 In this photo from January, Yvonne Gibbs, 72, receives the COVID-19 vaccine at the TCF Center in Detroit. Michigan is confronting an alarming spike in coronavirus cases.
Image credit: Carlos Osorio

If you look at a heat map for cases of COVID-19 in the United States, Michigan stands out. Its alarming spike in cases has fueled calls to flood extra vaccine doses to the state, but the Biden administration isn’t sold on the idea.

The White House said in a briefing Friday that it is offering a “set of additional tools” to help hot spots like Michigan, but that toolbox does not include extra vaccine supply.

Michigan Gov. Gretchen Whitmer said in her own briefing Friday that she has been speaking with the administration “regularly” and is “grateful for what they have offered.” Still, she renewed her call for a surge in vaccines to combat a spike driven by the B.1.1.7 variant initially found in the United Kingdom.

The Biden administration allocates vaccines to states each week based on the number of adults who live there. It’s a simple formula aimed at equal distribution and it is watched closely by governors, including Minnesota’s Tim Walz.

“Anytime they announce how many vaccines there are, I do my math,” said Walz. “Minnesota gets 1.74% of what that national number is.”

Every week, it’s the same share of doses, a level of predictability that allows states and providers to plan and schedule appointments. The administration isn’t holding doses back, so for one state to get more than its allotment, another state would likely have to get less. Aside from the public health questions, changing allocations would be politically difficult, too.

But Walz said he and other governors have been texting about the idea. If the science says it would help areas struggling with the more contagious variants, then “I think governors are open to hearing that,” said Walz, adding that it will surely be easier to share when supply is less of a concern.

A number of prominent infectious disease experts are calling for Michigan to get more doses. “I’ve been calling for it for a couple of weeks now, because you could start to see the uptick in cases,” said Eric Topol, a professor of molecular medicine at the Scripps Research Center.

Topol said the best defense against the “superspreader variant” would be to inundate the state with vaccines.

“And just do 24/7 campaigns. Drive around. Just whatever it takes,” Topol said. It could suppress the surge, he argued.

This idea prompted Josh Schwab at the University of California, Berkeley, to run a couple of scenarios through a COVID-19 forecasting model he works on. He found that if Michigan got a double allocation of vaccines for two weeks, it could prevent 1,200 deaths by July. Even more effective would be coupling a vaccine surge with two weeks of shutting down restaurants and bars for in-person dining. That would save 2,500 lives, Schwab said.

“It would be a different situation if we didn’t have these vaccines,” Schwab said. “But we actually have a long-term plan now. We just have to get through this next short period.”

Soon, there will be more than enough vaccine doses to go around, enough supply for every adult in the United States by the end of May, President Biden has said.

It takes time for someone who has been given a vaccine to develop immunity, so a vaccination today would be preventing an infection several weeks down the line. And there’s an active debate about whether surging vaccines into Michigan is the best tactic, or whether there could be unintended consequences.

“Mother Nature is going to drive this pretty much, and if we try to respond with vaccine targeted to a given area, it’s just another two days before it’s in another area,” said Michael Osterholm, an infectious diseases expert at the University of Minnesota, who advised the Biden transition.

Osterholm has advocated for delaying second doses of the Pfizer and Moderna vaccines so more people can get at least some immunity from a first dose, an idea the Biden administration has resisted.

Osterholm said a lot of humility is needed when it comes to predicting where the virus will go next and where cases will spike or fall.

“I could see easily in the next six to eight weeks we would have to be triaging the vaccine to all 50 states, and at that point, there’s no such thing as triage,” he said.

There’s also some value to keeping the formula consistent, said Claire Hannan, executive director of the Association of Immunization Managers. The current system is efficiently getting vaccine doses into arms at a rate of more than 3 million a day.

“We have a cadence, we have a rhythm,” Hannan said. “I think we are doing a good job and I would not mess with that right now.”

White House officials aren’t putting it that plainly. But when COVID-19 coordinator Andy Slavitt was asked about this, he said they haven’t reached a point where any state has enough vaccines for everyone who wants them. He said the administration isn’t ruling anything out, but he has resisted adjusting the formula now.

“By and large, we are still allocating vaccines based upon population,” Slavitt told reporters this week. “Clearly we will get to a place where more targeted strategies will work.”

On Friday, White House coronavirus czar Jeffrey Zients said the current strategy remains the only “equitable and efficient” way to allocate the vaccine. He said the administration would not shift vaccine to surge it in areas where there are currently large outbreaks of the virus, saying that the virus was “unpredictable” and could surge anywhere, making it important to keep a steady supply to states.

The Biden administration has worked hard to avoid pitting states against each other, scrapping for a finite resource. But it has sent teams to Michigan to help the state make the most of the doses it is getting.

That assistance includes identifying hot spots, increasing testing, and crunching the data to see if the vaccines the state is getting could be more effectively deployed.

And it isn’t just Michigan. The CDC and Biden administration are offering technical assistance to other states facing challenges, too.