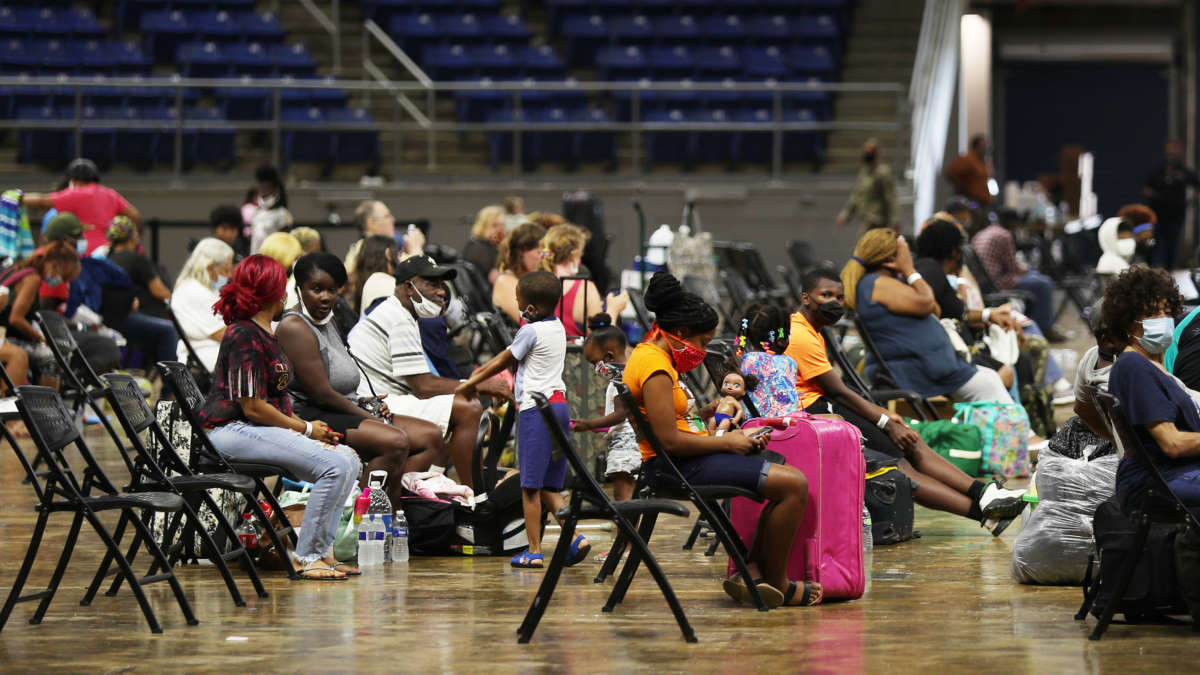 People wait to board buses as they are evacuated by local and state government officials before the arrival of Hurricane Laura on Tuesday in Lake Charles, Louisiana.
Image credit: Joe Raedle

Texas and Louisiana were already struggling to contain the spread of the coronavirus when Hurricane Laura hit on Wednesday night, and now some experts are warning mass evacuations could be responsible for a new wave of infections.

More than half a million people were ordered to leave parts of those states in the largest evacuation since the coronavirus pandemic began. Many who heeded those warnings were directed to stay in government-paid hotel rooms or sleep in their cars since officials didn’t want to open mass shelters and risk the spread of COVID-19.

Before Laura emerged, researchers at Columbia University conducted a study that found a large-scale hurricane evacuation could spur thousands of COVID-19 infections. The study is still undergoing peer review.

“In every scenario we analyzed, hurricane evacuations cause an increase in the number of COVID-19 cases,” Kristy Dahl, a senior climate scientist at the Union of Concerned Scientists and one of the co-authors of the study, told NBC News.

But cases have been dropping over the past week in both states, according to a New York Times database. Texas recorded an average of 5,316 cases per day, a 25% decrease from the average two weeks earlier, while Louisiana saw 726 new cases per day on average, a 39% drop.

“We’re basically going to be blind for this week because we’ll have to discontinue much of our community-based testing,” he said.

More than 2,100 individuals were sheltered across the state with more than 1,900 people housed in hotel and motel rooms, Edwards said. Congregate shelters were only used as a last resort.

“We want people to be as safe as possible, not just from the storm but also from the virus,” he said.

As the storm churned in the Gulf of Mexico on Wednesday, Texas Gov. Greg Abbott urged residents to keep following coronavirus health protocols as they rushed to evacuate the most vulnerable areas in Laura’s path. He implored families to isolate themselves in hotel rooms and avoid crowding at intake centers.

“Remember, just because a hurricane is coming to Texas does not mean that COVID-19 either has or is going to leave Texas,” Abbott said.

“With COVID, their buses are about half full so we need twice as many buses as we normally would,” he said, noting that many people also showed up in their own vehicles.

Evacuees were directed to intake centers in Austin, San Antonio and Dallas to receive instructions on where to shelter. Medical screenings were also conducted, including temperature checks and questions about symptoms.

Hotel rooms began to fill up across Texas as early as Wednesday morning, the Texas Tribune reported.

An intake center at the Circuit of the Americas racetrack in Austin began turning evacuees away at 5:30 a.m. Wednesday morning after filling 3,000 available rooms. By 10 a.m., officials said they reopened the racetrack as a rest area while people waited for rooms to become available. Some people waited up to eight hours in their cars, KVUE reported.

The chief of the Texas Emergency Management Agency told reporters the issue resulted partly because some evacuees were going directly to hotels without first registering with officials at the racetrack. Austin later opened the city’s convention center as a shelter, but could only house 135 people in the building — which can normally hold up to 3,200 — due to COVID-19.

The issue of space ballooned as evacuees drove to registration areas in San Antonio and Dallas in search of shelter.

“Hotels up and down the coast from Austin to San Antonio are full,” Rocky Vaz, Dallas’ director of emergency management, said at a news conference Wednesday afternoon. “Dallas hotels are filling up extremely fast.”

Staffing shortages also contributed to the delay, since many hotel workers were laid off or furloughed due to the pandemic, San Antonio Mayor Ron Nirenberg told Texas Public Radio.

“We’ve got a lot of empty rooms and hotels around this city, but we don’t have staff so people are having to re-call staff to get those rooms operational and that takes a little bit of time,” he said.

By Wednesday evening, Abbott said more than 8,500 people were provided shelter throughout the state, with more than 3,000 people sheltered in hotel rooms.