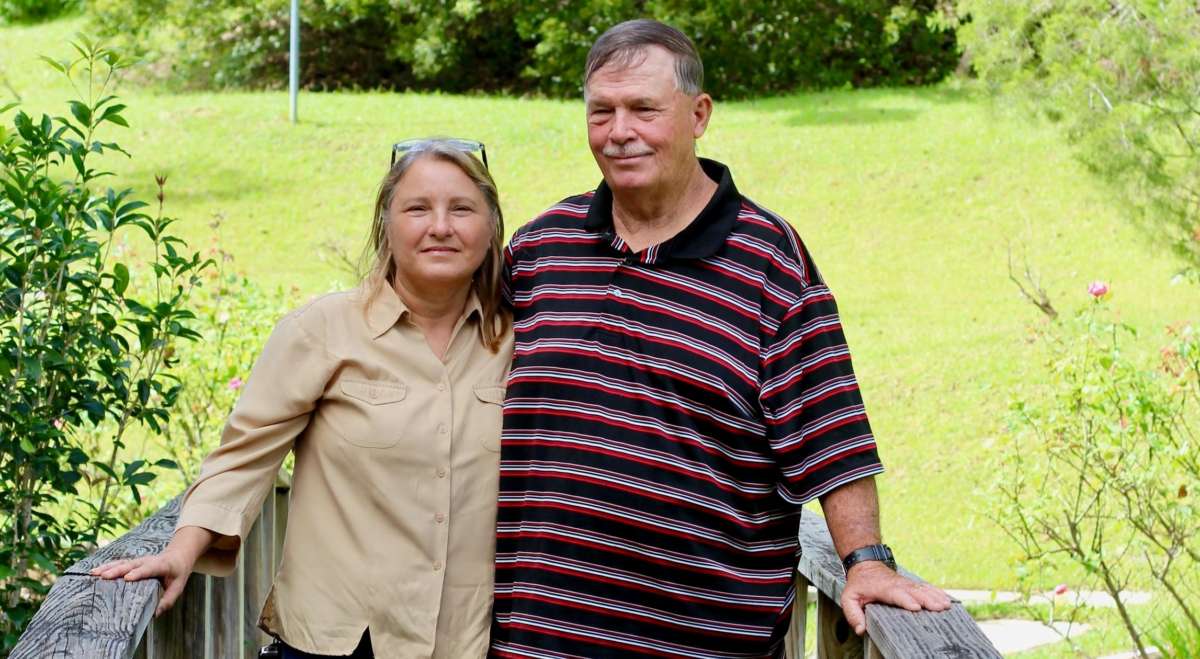 Fighting a single life-threatening illness is bad enough. But Guy Nichols recently battled two at once.

Nichols, a Kentucky native, moved to North Florida years ago and now calls Panama City home. He said life was pretty good until several months ago.

“I was going to the VA clinic. My PA was really, really high on my blood count. They said, ‘Let’s send you to a specialist,’ so they sent me to Dr. Baldwin, a urologist. And he said, ‘We’re going to run some tests, but you got cancer. We just have to figure out where it’s at’.”

Nichols says he then began treatment for his prostate cancer, starting with radiation therapy.

“They sent me to Dr. Sharp. He put 3 little gold chips in my prostate to pinpoint where the radiation would work just in that area.”

Dr. Philip Sharp is a radiation oncology specialist at Tallahassee Memorial’s Cancer Center. Right after that, said Nichols, things got a bit more complicated and dangerous.

“The day before I was supposed to get my first treatment, I’d been feeling bad for a couple of weeks. And I couldn’t taste anything. It was like I was eating lead.”

A loss of taste and smell is, of course, a common early symptom of the novel coronavirus.

“I went to Bay Medical and they ran some tests. They said I had double pneumonia in both lungs. And COVID.”

But because Nichol’s symptoms weren’t too serious just yet, Bay Medical’s doctors gave him the option of either staying in the hospital or going home.

“And I said, no, I’d just go to the house. That didn’t work. About 3 days later I went to the Tallahassee (Memorial) Hospital.”

One reason for that was there was already a member of the family with COVID-19 at TMH. Guy Nichols, Jr.

“My son was in a room about three rooms down from me. We called each other on the phone back and forth. But I stayed in there for about 3 or 4 days. Then they came in and said if I could pass the breathing test, they’d send me home with an oxygen tank.”

Nichols said that took awhile and it was even longer for his grown son to reach that stage of recovery.

“It hit him worse than it did me, because he stayed in there three or four days longer than I did. He works at the Florida State Hospital in Chattahoochee. Here he is out of work and they won’t let him come back until he gets two negative tests. He had to fight like I did to get negatives. Every time we went, it was positive, positive, positive, positive.”

But finally, the elder Nichols was well enough to resume his cancer treatment.

“Finally went in and got my negative (test) and Dr. Sharp called me in and said we’d take care of my cancer, so that’s what I’ve been doing.”

Nichols acknowledged he’s much better now. “If I felt any better, I’d bust,” is how he describes it. But he’s still in awe of how nasty and unpredictable the virus can be.

“I would never wish it on nobody! But what really amazes me and my son is our wives got it and they blew their noses three times! My wife was a little sick, but she was over it in three days. She never got the pneumonia or nothing.”

And now, with his coronavirus experience apparently behind him, Guy Nichols can concentrate on conquering his cancer.