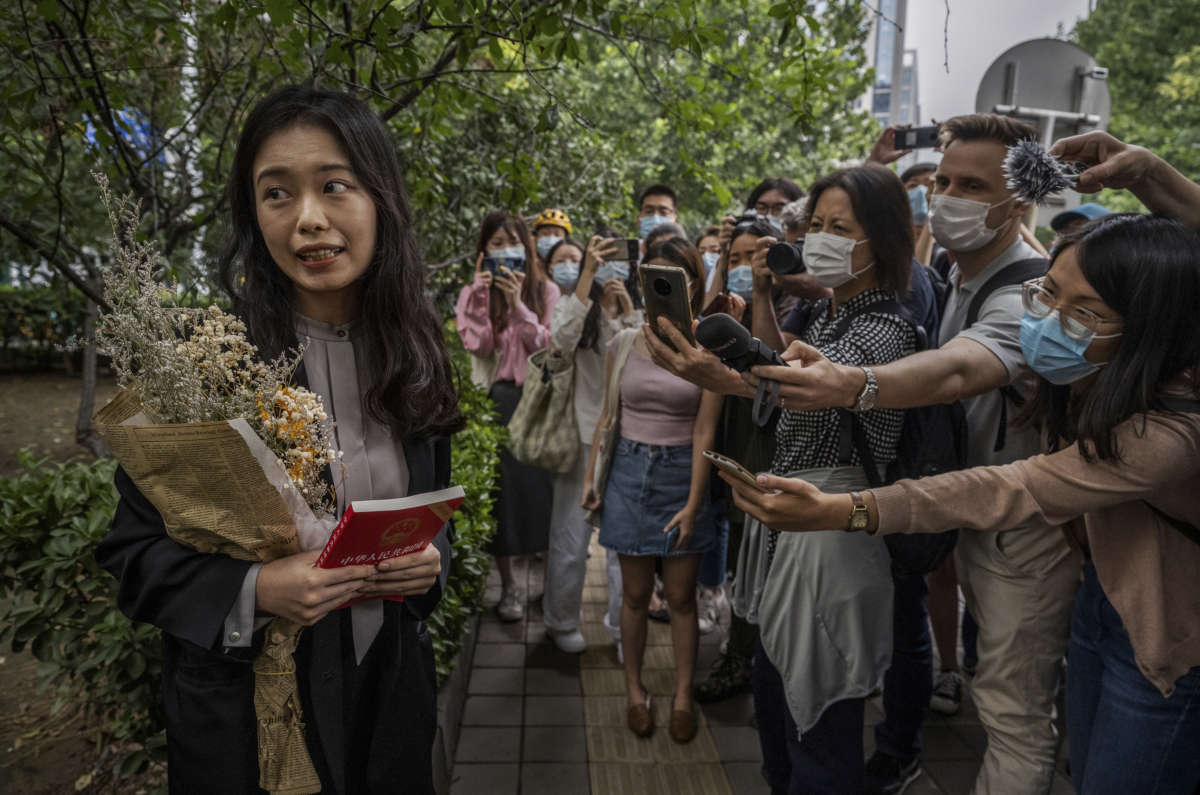 Zhou Xiaoxuan speaks to journalists and supporters on Sept. 14 outside the Haidian District People's Court in Beijing before a hearing in her case. She alleged that she was groped and forcibly kissed by prominent TV anchor Zhu Jun, who denies the allegations and has countersued for defamation. The court ruled there was not sufficient evidence of sexual harassment.

One of China’s most prominent #MeToo cases has concluded with a Beijing court ruling that it could not determine whether sexual harassment occurred, a blow for gender equality advocates and for China’s faltering #MeToo movement.

“I have done all that I can. I knew this would be the last hearing, but I never imagined it’d turn out like this,” said a tearful Zhou Xiaoxuan after her court hearing this week. She had alleged that Zhu Jun, a well-known television anchor, groped and forcibly kissed her in 2014 in a dressing room at CCTV, China’s state broadcaster, where she was briefly an intern. Zhu denies the allegations.

“I’m very regretful to tell everyone that I lost” she says. Zhou says she will appeal, claiming the court blocked her efforts to obtain and present significant evidence.

And she faces a countersuit for defamation from Zhu Jun.

Zhou’s allegations against Zhu — first publicized in a series of posts she wrote on the social media site Weibo in 2018 — coincided with a number of high-profile sexual assault cases in the U.S., including against disgraced media mogul Harvey Weinstein. The account by Zhou, who is also known by the nickname Xianzi, helped galvanize China’s own reckoning with the country’s deeply-entrenched gender inequalities and biases.

Soon after she made her case, Zhou became the face of a burgeoning #MeToo movement in China. The firing of a university professor accused by a student of assaulting her in a separate case in 2018 then emboldened dozens of other women to came forward with their experiences.

In 2020, China revised its civil code to include more concrete language detailing what constitutes sexual assault and harassment, making it easier to file a lawsuit.

And cases keep appearing, including two that made news last month. Kris Wu, one of the country’s best known pop stars, was detained by Beijing police after a former lover and fellow performer accused him of deliberately intoxicating her and assaulting her while she was unconscious. Wu denies all allegations.

Also in August, an employee with the tech giant Alibaba accused her manager and two company executives of forcing her to drink alcohol at a work dinner. She alleged that surveillance footage from the hotel lobby and hallway reviewed by police shows the manager and one of the executives dragging her back to her room, where she alleges her manager raped her. Alibaba fired her manager after her written account went viral online, launching a police investigation.

Despite these high-profile cases, China’s #MeToo movement has snagged after authorities began censoring online discussion of cases and detaining and questioning activists who have tried to publicize new accusations. Zhou has been banned from posting on Weibo, the Chinese social media site, for a year, and even reshares of her posts have been deleted by cybersecurity authorities.

Many women on social media have said that women are discouraged from reporting harassment and rape because of the threat of retaliation from an alleged assailant and tepid legal support for those who come forward. For example, police released the fired Alibaba manager after just over two weeks, saying his arrest was not authorized, and they could find no evidence of criminal behavior.

An August report from Yale Law School researchers found only 83 lawsuits concerning sexual harassment were filed in China between 2018-2020 in the public law enforcement database. Of those 83 cases, just six were brought by victims against a harasser. The remainder were filed by the accused harassers for damages against the alleged victim or their former employee for wrongful termination.

Zhou, who herself has been embroiled in the defamation lawsuit filed by Zhu, the TV anchor, could not be reached for comment.

“When an alleged harasser countersues, the burden of proof in those cases is often reversed, so in a defamation suit, it is often the defendant who bears the burden of proof to show the alleged behavior took place,” says Darius Longarino, a researcher at the Yale Law School’s Paul Tsai Center. That means Zhou must be the one to prove whether an incident of sexual harassment occurred, not the plaintiff filing a countersuit against the alleged victim.

In Zhou’s case, numerous delays preceded the ruling. Zhou’s case against Zhu had been waiting nearly two years to conclude. The court abruptly canceled a hearing on the day it was to take place in May with no public explanation. The court had also blocked her lawyers when they tried to have the case tried on the new 2020 provisions specifically citing sexual harassment as cause for a lawsuit. Instead, they tried Zhu for a “personality rights dispute.”

In a essay published on social media and chat groups, Zhou said the court blocked her repeated efforts to retrieve video footage evidence and to summon witnesses and a testifying expert.

At Zhou’s Beijing court hearing this week, plainclothes police hovered alongside dozens of supporters, who gathered despite the intimidation. They held signs saying “stand together” in Chinese as security officials yelled at them to disperse for “pandemic control.” Beijing currently has zero cases of infections.

After a nearly 10-hour hearing, the court immediately came to a verdict: “The court believes that Ms. Zhou has not provided sufficient evidence to prove Mr. Zhu committed sexual harassment,” the Beijing Haidian district court said in a statement. Chinese courts usually take up to a month to decide complex cases like Zhou’s after hearing arguments and almost never issue a judgement immediately after hearings conclude.

Zhu did not show up to the hearing.