Coronavirus: U.S. Still Seeing Thousands Of Flights, Despite A Drop In Air Travel 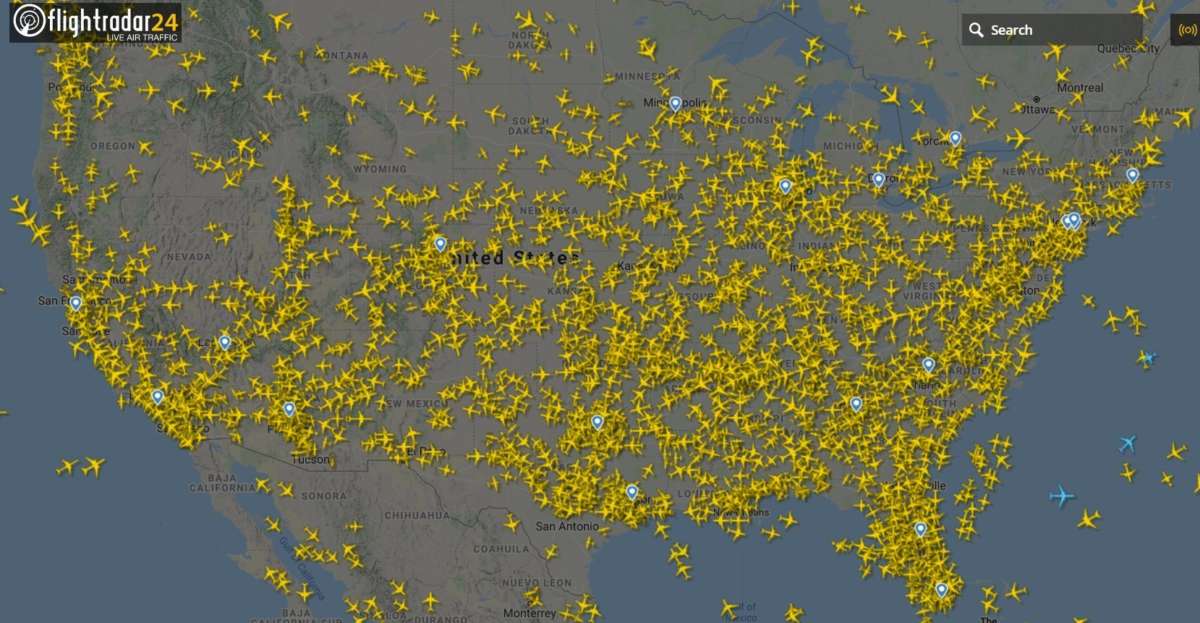 With the coronavirus outbreak taking hold in the U.S., thousands of flights have been canceled — but on Sunday, there were still 2,800 planes in the air, according to aviation site Flightradar.com

Millions of Americans are currently under stay-at-home orders, part of a wider effort to curb the spread of the coronavirus that causes COVID-19, causing international air travel to plummet. But within the U.S., thousands of domestic passenger flights are still taking off each day.

A look at U.S. air traffic finds thousands of planes in the air – a sight that could be jarring to anyone practicing social distancing, or living under stay-at-home orders that have now been issued in more than 10 states.

“It would be accurate to say that transatlantic traffic has fallen sharply,” says Ian Petchenik, of the tracking site Flightradar24.com. “U.S. domestic traffic has also fallen significantly, about 40%.”

It has been two weeks since President Trump recommended Americans stay at home and urged people not to congregate in groups – guidance that has now been extended through the end of April. But the nation’s aviation system is under no such restrictions. And despite customers’ falling demand and airlines canceling thousands of flights, aviation-tracking websites show the U.S. is still covered with thousands of airplane-shaped icons.

“The U.S. domestic market is so large that even a substantial decrease leaves a lot of traffic in the sky,” Petchenik says. “For instance, at 10 a.m. ET, we’re tracking 2,800 flights over the U.S. as compared to 7,800 at the beginning of March.”

Flightradar24 illustrates the point in a pair of before-and-after images, showing a distinct drop in U.S. domestic traffic from Sunday, March 1 to Sunday, March 29. There were 4,000 fewer planes in the air on the later date — but that still meant some 2,800 flights were airborne.

Petchenik also notes that the site’s tracking maps don’t differentiate between cargo and passenger flights – an important point at a time when many Americans are turning online to stock up on products they might otherwise buy in person.

In a blog post, Petchenik wrote that worldwide, the rate of flight cancellations is higher than in the U.S.

“Commercial flights decreased 55% in the final week of March 2020 compared to 2019,” he wrote. “We expect this trend to continue as airlines remove additional flights from their schedules.”

U.S. flights are still common despite the Federal Aviation Administration’s move on March 11 to waive “slot use” requirements that might have forced airlines to fly some routes for the sole purpose of meeting minimum-use rules at some of the nation’s most congested airports.

As of now, no U.S. states have issued orders that forbid air travel. One of the most aggressive policies within the U.S. is in Puerto Rico, which is requiring commercial flights from outside the island to land at airports where passengers can undergo health screenings.

Other U.S. officials are considering similar moves. Late last week, the FAA issued a guidance letter for agencies at the state or local level that might be considering their own travel restrictions.

Air travel restrictions are often controversial, and in the context of fighting a pandemic, the practice can spur fierce debates. The World Health Organization, for instance, says international travel bans generally don’t work well. In its most recent guidance, the WHO says it “continues to advise against the application of travel or trade restrictions to countries experiencing COVID-19 outbreaks.”

“In general, evidence shows that restricting the movement of people and goods during public health emergencies is ineffective in most situations and may divert resources from other interventions,” the WHO said in late February. “Furthermore, restrictions may interrupt needed aid and technical support, may disrupt businesses, and may have negative social and economic effects on the affected countries.”

Such limits can be helpful on a temporary basis, the organization said, in situations such as “in settings with few international connections and limited response capacities.” The WHO guidance did not mention travel limitations within a single country.