Coronavirus: More New Cases Are Now Reported Outside China Than Inside 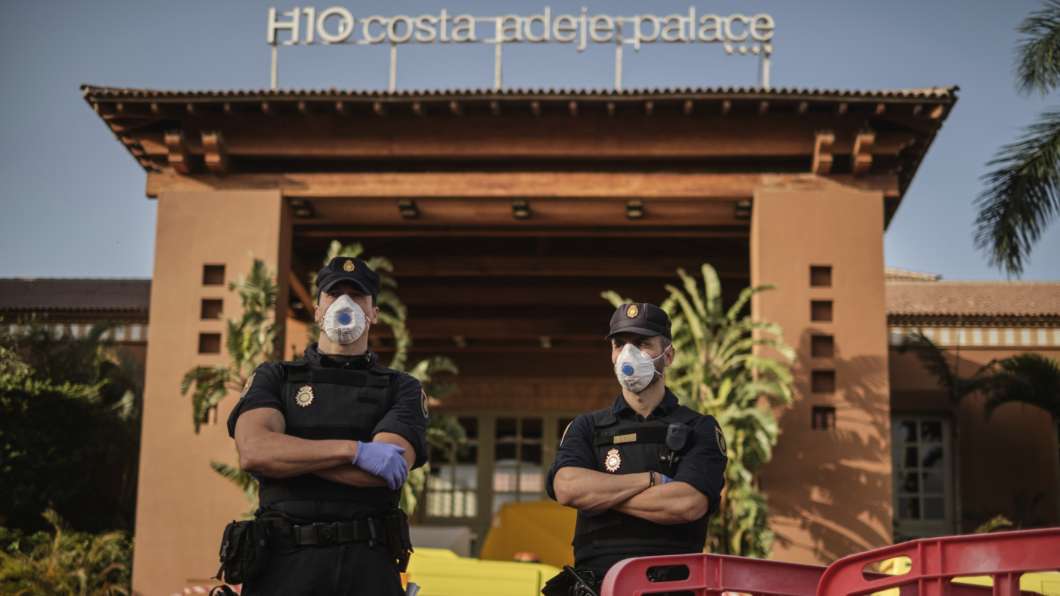 Police officers wear face masks Wednesday in front of a hotel on Tenerife, the largest of Spain's Canary Islands. Spanish officials say a hotel on the island has been placed under quarantine after an Italian doctor staying there tested positive for the new coronavirus.

“Outside China, there are now 2,790 cases in 37 countries, and 44 deaths,” WHO Director-General Tedros Adhanom Ghebreyesus said at a briefing in Geneva.

China’s National Health Commission reported more than 400 new confirmed cases on Tuesday, with the majority of them in Wuhan, in Hubei province. Tedros did not specify how many new cases were reported in other countries. But he noted an ongoing rise of cases elsewhere.

The growing global tally includes spikes in South Korea (with 1,261 total cases), Italy (400 cases) and Iran (139 cases). Each of those countries has confirmed at least 10 deaths so far from COVID-19, a mark that surpasses the death toll reported in many Chinese provinces.

In mainland China, Tedros said, only 10 new cases were reported Tuesday outside of Hubei province, where the virus emerged months ago.

Tedros is urging the international community to have “hope, courage and confidence” that the new respiratory virus can be contained, citing 14 countries that haven’t reported a new case in more than a week.

Worldwide, there are currently 81,191 cases of the novel coronavirus, according to a dashboard created by the Johns Hopkins Whiting School of Engineering. That number includes 30,281 cases in which people recovered from COVID-19.

But Tedros also warned that the situation could get worse, saying, “At the same time, all countries, whether they have cases or not, must prepare for a potential pandemic.”

That echoed Tuesday’s stark warning from the Centers for Disease Control and Prevention to people in the United States. Dr. Nancy Messonnier of the CDC said Americans should prepare for the spread of the new coronavirus stateside. “It’s not so much a question of if this will happen anymore, but more really a question of when it will happen — and how many people in this country will have severe illness,” she said.

The U.S. public should be ready to adapt to what could be disruptive changes, Messonnier said, speaking weeks after COVID-19 worries forced the CDC to issue its first quarantine in more than 50 years.

“I had a conversation with my family over breakfast this morning,” Messonnier said Tuesday. “And I told my children that while I didn’t think that they were at risk right now, we, as a family, need to be preparing for significant disruption of our lives.”

The changes could range from the cancellation of public gatherings to school shutdowns, she said, mentioning steps that health officials are already taking in China, Italy, South Korea and elsewhere.

Two countries in northern Africa have confirmed cases of the new coronavirus: Algeria announced its first case Wednesday, and Egypt’s health ministry confirmed its first patient on Feb. 14. In both of those instances, the patients are foreign nationals.

Algeria’s health ministry says an Italian man who arrived in the country from Milan on Feb. 17 was placed under observation after showing symptoms and was then confirmed to have COVID-19.

The patient is a man, 61, who lives in São Paulo and had recently returned from a trip to Italy, Health Minister Luis Henrique Mandetta said at a news conference about the case. The man is currently doing well and living at home in isolation, Brazil’s health ministry says. The man’s wife and other relatives are also being monitored, as are some of the passengers who shared the same plane.

In addition to the confirmed case, Brazil’s health ministry says the country has 20 other suspected cases of the coronavirus – and that nearly 60 people had been determined not to have the virus, after being referred to doctors.

In his update on the global impact of COVID-19, Tedros said the recent clusters of cases in Italy and Iran have already affected other countries.

In Spain’s Canary Islands, about 1,000 tourists are now under quarantine in a hotel on Tenerife after an Italian doctor staying at the hotel tested positive for the coronavirus.

The virus is also continuing to spread to new European countries, including Finland. The Finnish Institute for Health and Welfare confirms the country has one case; the STT news agency says the patient is a woman whose case was traced to Milan, Italy.

To prevent the spread of viral infection, the CDC recommends taking several basic steps, from avoiding close contact with people who are sick to washing hands with soap and water for at least 20 seconds.

The coronavirus epidemic has caused people in many countries to wear face masks. But the CDC says it “does not recommend that people who are well wear a facemask to protect themselves from respiratory diseases, including COVID-19.”

Instead, the health agency says, face masks should be worn by only two groups of people: health care providers and those who are sick and thus could spread the illness. It recommends that medical staff wear N95 respirators to prevent infection when treating patients.

On a broader scale, the WHO’s Tedros says every country should make it a top priority to protect workers who are dealing with the health crisis. And he says agencies should work with communities whose members are most at risk, “particularly the elderly and people with underlying health conditions.”

Not a pandemic, WHO says

Despite the worrying rise of cases at the international level, Tedros again rejected calls Wednesday for the WHO to declare a pandemic, saying it’s not an accurate label for a virus he still views as containable. He has also recently noted that the virus’s fatality rate outside of Hubei province is less than 1%.

The WHO declared the coronavirus outbreak a global health emergency in January, as cases surged in China. The organization now says it believes the epidemic peaked and plateaued in China between the end of January and the early February.

Despite that apparent progress in China, there are fears that COVID-19 could continue to disrupt one of the world’s most important economies, which has already been grappling with the effects of a trade war with the U.S.

The rapid spread of the disease has also prompted worries that the virus could exact a severe economic toll elsewhere, through extended work closures, travel restrictions and other measures.

In his closing remarks Wednesday, Tedros said international unity is crucial in battling the outbreak and its consequences.

“We are not just fighting to contain a virus and save lives. We are also in a fight to contain the social and economic damage a global pandemic could do,” he said.

Tedros added that the WHO is working with the World Bank and the International Monetary Fund to come up with ways to lessen the epidemic’s potential economic impact.