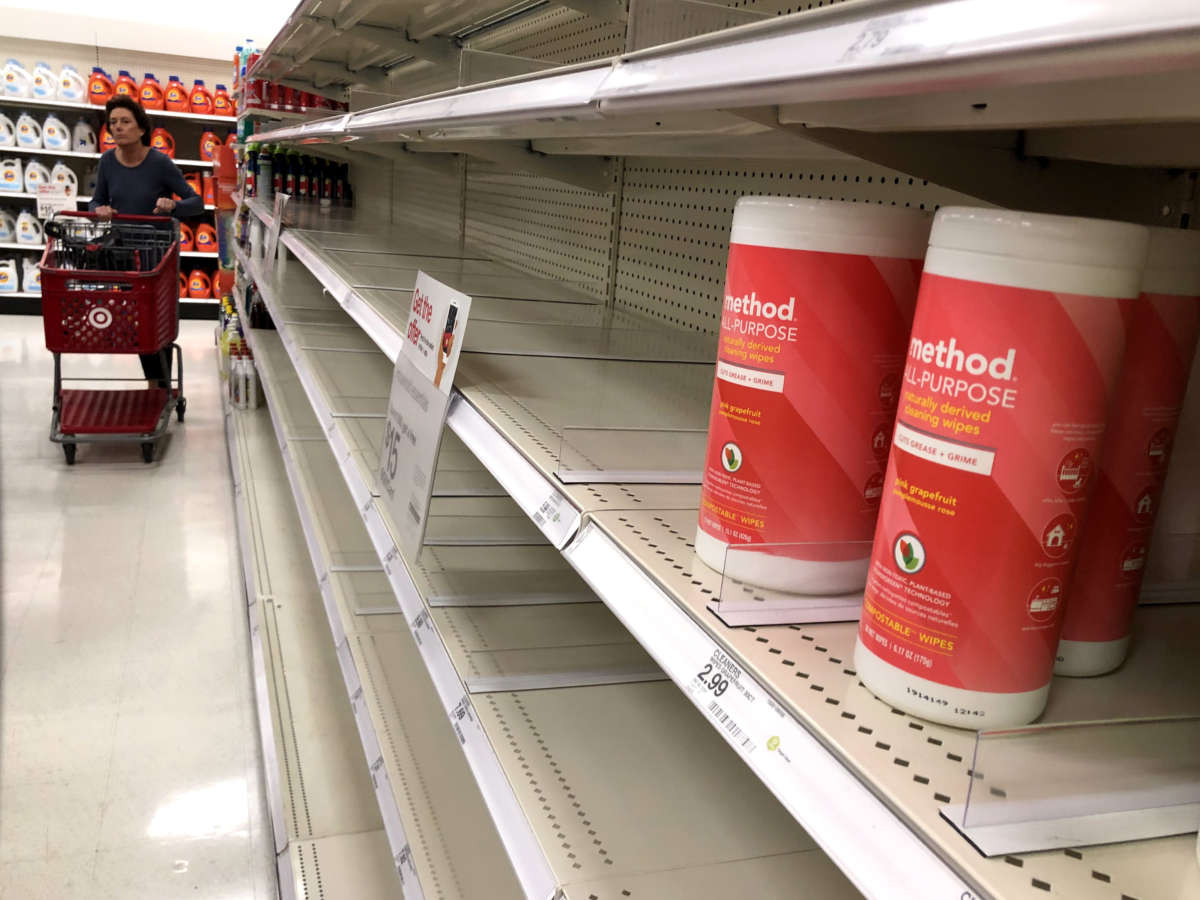 Fears of the virus have prompted shoppers to stock up on sanitizing options, leaving shelves of disinfectant wipes nearly empty at a Target store in Novato, Calif.
Image credit: Justin Sullivan

Los Angeles declared a health emergency over the coronavirus Wednesday, citing the need to address the possibility of community transmission of the disease that has caused more than 3,200 deaths globally.

“I have signed a declaration of local emergency for the City of Los Angeles,” Mayor Eric Garcetti announced via Facebook. “While there are only a few known active COVID-19 cases in the region, the declaration helps us access state and federal funding to strengthen and support our efforts to prepare our region and keep our communities safe.”

Los Angeles County mirrored the city’s move, in a step that Kathryn Barger, chair of the county’s board of supervisors, said was a planned reaction to the virus.

“This is not a response rooted in panic,” Barger said, adding that the emergency declaration would help agencies coordinate their response and contain the virus in a county where more than 10 million people live.

One person is hospitalized while five others are being monitored at home, Ferrer said. The county’s first patient, a Chinese national who was diagnosed in January, has recovered from the virus, she said.

“Three of the new cases were travelers who were traveling together in northern Italy,” Ferrer said at a news conference. Two others are relatives of a person who was infected with the coronavirus outside of the county, she said. The sixth case is a person who works in a field that exposes them to international travelers, Ferrer added.

There are at least 80 confirmed cases of the coronavirus that causes COVID-19 in the U.S., the Centers for Disease Control and Prevention said in its latest update on the virus. It has been blamed for nine deaths in the U.S. — all in Washington state and has been found in at least 13 states since late January.

California has at least 29 cases, and Washington state has 27, the federal agency says.

While international travel has been linked to 24 cases, the cause of transmission is still under investigation in 40 cases – half of the national total. Person-to-person spread in the U.S. has caused infection in 16 cases, the CDC says.

The CDC data reflects numbers that were reported by 4 p.m. of the previous afternoon – meaning the actual number of cases in the U.S. may be higher than the most recent posting by the agency.

“States are now testing and publicly reporting their cases,” the CDC says. “In the event of a discrepancy, state case counts are the most up to date.”

The CDC’s official tally of cases in the U.S. doesn’t include the 49 Americans with the COVID-19 virus who have been repatriated from outbreaks in Wuhan, China, and aboard the Diamond Princess cruise ship. All together, there are at least 129 cases in the U.S.