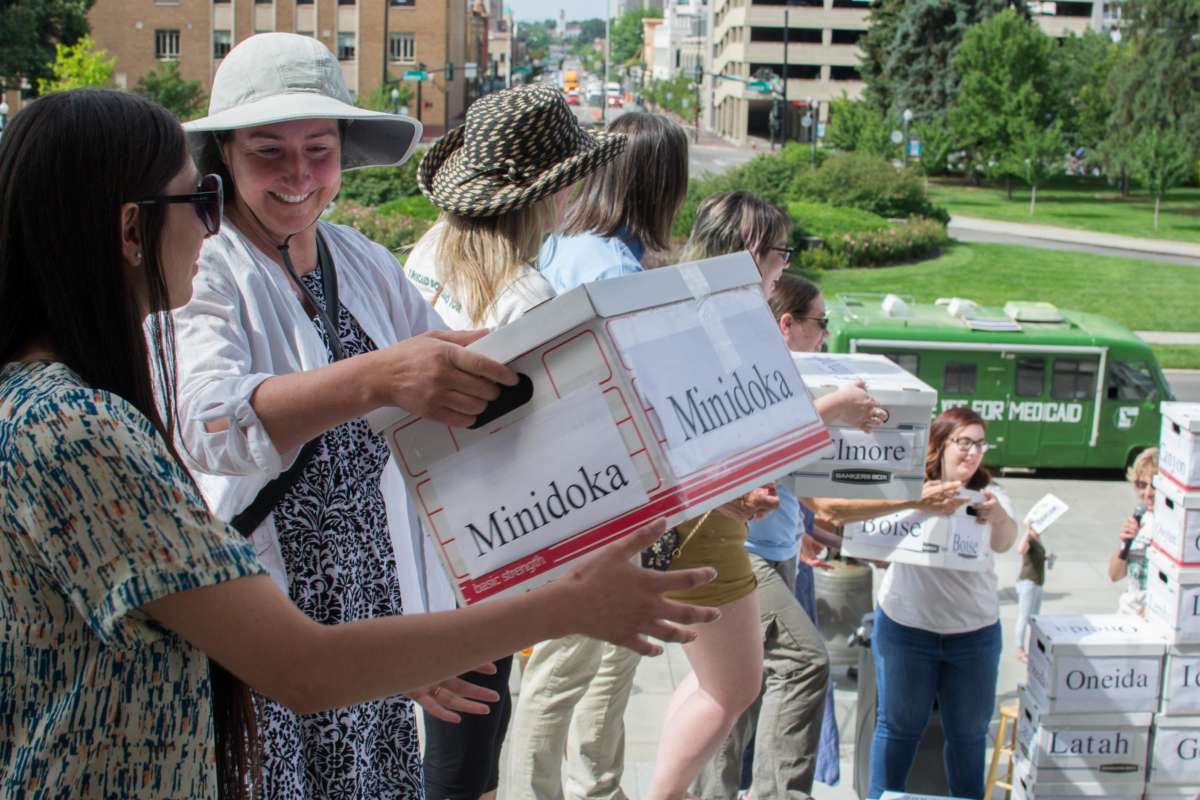 Volunteers pass boxes of signatures to qualify a 2018 ballot measure to expand Medicaid in Idaho. The coronavirus outbreak has halted other ballot initiatives in Idaho and other states.
Image credit: James Dawson

The sounds of signature gatherers walking door-to-door in many states would normally be just on the horizon as spring comes into bloom.

As the coronavirus began spreading in Washington State in late February, Linda Larson, a volunteer organizer across the border in Idaho for one effort to get on the ballot decided to take precautions to protect her group and the public.

“All of our volunteers would have an apron with hand sanitizer in the apron and some alcoholic wipes and we were cleaning the pens before we would give them to someone to sign,” Larson, of the group Reclaim Idaho, said.

The initiative she and her fellow volunteers were gathering signatures for would have expanded state education funding by raising taxes on the wealthy and corporations. It needed about 55,000 signatures to get on the November ballot.

Larson even took precautions herself, since she had to notarize each and every one of these petitions. “I put all of the petitions in a basket and I would wait 48-hours before I would handle those.”

But just two days after President Trump’s March 16 announcement of national guidelines in favor of aggressive social-distancing practices to slow the spread the of the virus, the effort Larson was working on pulled the plug.

The coronavirus pandemic has disrupted elections and political campaigns all over the country. But elections can be rescheduled and conducted by mail. Campaigns have tried going virtual.

Ballot measures almost completely rely on canvassers to gather thousands of signatures in person in order for an initiative to make it on the ballot. And the current public health concerns about social interaction have forced ballot measure organizers to shut down their efforts as large events and door-to-door canvassing become impossible.

“Everyone was kind of grieving, I guess, over the work that had been put in that, now we are struggling to see a path forward with this election cycle at least,” said Rebecca Schroeder, the executive director of Reclaim Idaho. The group was also the driving force behind a ballot measure that expanded Medicaid in Idaho in 2018.

Once it became clear that it was unsafe for volunteers to pass around petitions in public, Schroeder decided to end the campaign.

“I would rather, I think, just go out kicking and screaming and just lose the right way. You know? It is not how anyone wanted it to happen,” she said.

It’s not a good time to be a ballot initiative organizer in any of the 24 states or Washington, D.C., where they’re allowed, according to Josh Altic, who tracks ballot measures for the website Ballotpedia.

“A lot of the states have essentially either shut down signature gathering through stay-at-home orders or there’s no events and events are the bread and butter of petition drives,” Altic said.

Deadlines are fast approaching to turn in petitions, and the tens of thousands of signatures necessary, to put an initiative in front of voters. Altic says 40% of states that allow ballot initiatives set their deadlines from now through August.

At least one state is giving these campaigns some reprieve.

Oklahoma has paused the clock on a signature-gathering deadline. But other states aren’t doing much to help out these campaigns so far.

Two groups in Arkansas — one which would’ve legalized gaming machines and another that would’ve established a citizen’s redistricting commission — folded signature gathering efforts in mid-March.

Since then, other campaigns have suspended operations in Arizona, California, Michigan, Nebraska and Oregon.

Reclaim Idaho asked Gov. Brad Little, a Republican, and state lawmakers to allow voters to sign petitions online — something no state currently allows. The request was never taken up.

That doesn’t surprise Altic, who says there’s often friction between organizers and state lawmakers. In some cases, voters are directly overruling the legislative process.

“I suspect that there’s not going to be a whole lot of sympathy or a lot of treating this as sort of a political emergency.”

After Reclaim Idaho suspended its campaign, organizer Linda Larson said she and her fellow volunteers are “discouraged” and “demoralized” after putting in months of work to try to boost education funding.

“If our legislators aren’t willing to solve it, then OK, fine, we’ll do this. But give us the tools to be able to do this,” she said. “That’s all we’re asking.”

If it were safe to collect signatures, she’d be back on the streets immediately.

For now, Reclaim Idaho is going back to one of its original missions: trying to help people sign up for Medicaid as the country’s economic outlook gets worse.