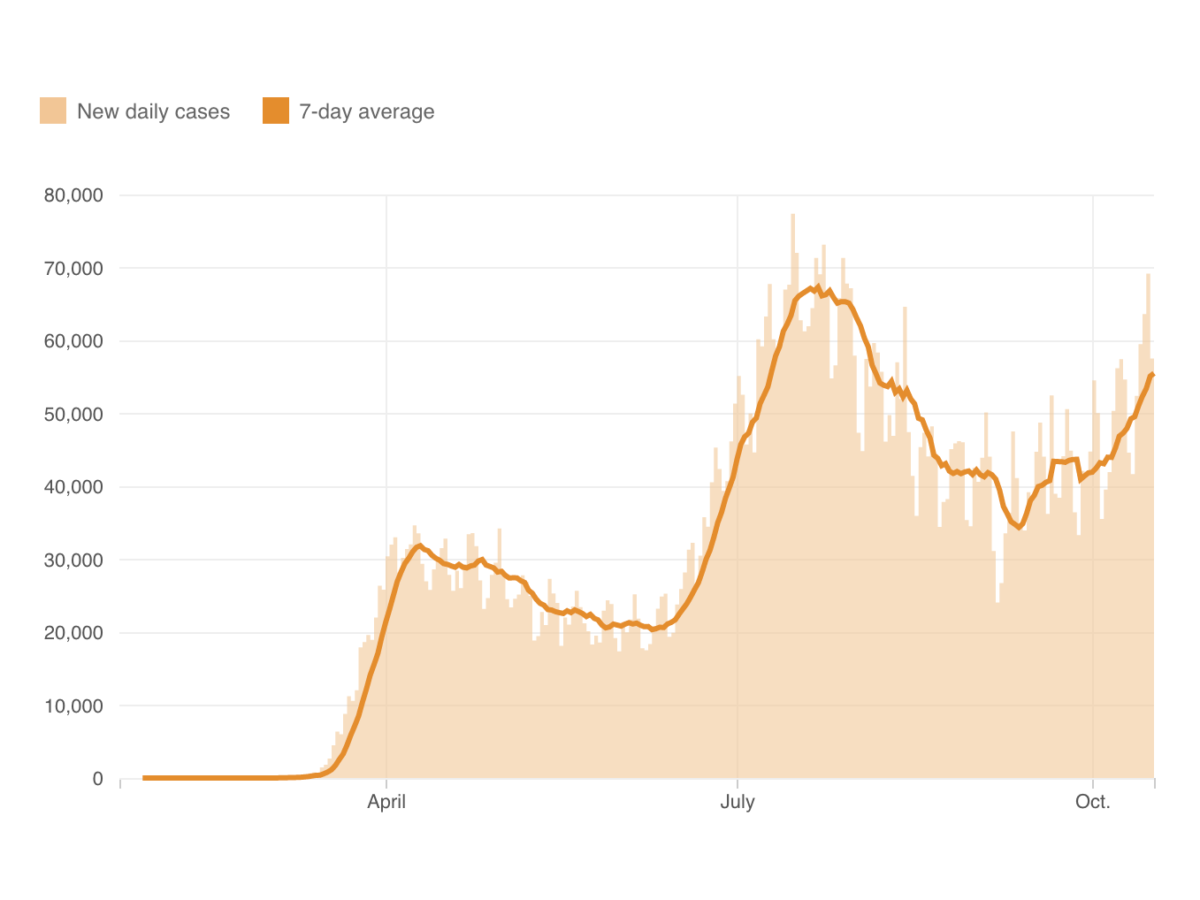 With coronavirus outbreaks picking up speed in dozens of states, the U.S. is now climbing steadily toward a new peak in cases that may soon rival the summer surge — when the country hit more than 60,000 infections on average a day for weeks in a row.

On Friday, U.S. cases surged higher than they had since late July, hitting nearly 70,000 in one day. The seven-day daily average is now more than 56,000 cases a day. New cases have gone up by 30% from two weeks ago.

Last week, 17 states — primarily in the Midwest and Great Plains — posted new daily records, according to the COVID Tracking Project.

Hospitalizations also increased in more than 40 states, with the numbers of people currently hospitalized reaching more than 36,000, which is more than half the highs recorded during the spring and summer surges.

Unlike during the summer, when a handful of larger states drove up the numbers, the current growth is diffused across many states.

The summer may have acted as a kind of buffer, he says, for the middle of the country, keeping the virus at lower levels in the community because people spent more time outside.

But Adalja says more people congregating indoors, including students returning to schools and college campuses, and general fatigue around pandemic precautions are all likely propelling this latest growth in cases.

“There may be places that were not hit hard early on where the virus finds it very hospitable because people are complacent,” Adalja says.

Which states are driving the surge?

The outbreaks raging in the Midwest play a major role in the rising numbers, with 45% growth in new infections over the past two weeks.

That region (defined as 12 states by the U.S. census) accounted for more than a third of all new cases in the U.S. over the past week, according to NPR’s analysis of CDC data.

Illinois and Wisconsin each added nearly 20,000 new cases in the past seven days, rivaling much larger states like California. Hospitalizations more than doubled in the past two weeks in Wisconsin, and the state stood up a field hospital to make room for the growing number of patients.

While the overall numbers in North and South Dakota are lower than those of neighboring states, their rate of new infections per capita continues to eclipse all other states — and even what Arizona recorded during its devastating summer surge.

“We are caught in the middle of a COVID storm,” said North Dakota’s Republican Gov. Doug Burgum at a press event this week as he displayed a map with alarming positivity rates across the region, from Iowa to Idaho to Kansas.

The outbreak has increasingly fanned out to Western states, too.

Montana, Wyoming and Utah have high per capita rates of new infections on par with the Midwest, and even states that have successfully kept the virus in check for months are now seeing a spike.

In New Mexico, daily new infections more than doubled over the past two weeks and are now at the highest levels since the pandemic began.

The South, which includes Florida and Texas, accounts for close to 40% of total cases in the past week, with cases rising quickly in some states like Tennessee and Mississippi. While the Northeast has a much smaller share of cases compared to other regions, the average case count doubled over the past month.

The pandemic was predicted to gain traction in the fall, a time when respiratory viruses typically peak as people spend more time indoors. But the steep rise has come even sooner than some public health experts anticipated.

“It’s happening at a rate that is even faster than I might have expected,” says Dr. Peter Hotez, dean for the National School of Tropical Medicine at Baylor College of Medicine. “I predict then we’ll soon start seeing the number of deaths go up.”

Along with the arrival of cooler temperatures in Northern states, Hotez points out that some of those states have resisted mandates requiring face masks and social distancing.

Some of the growth in cases is fueled not by new spikes but by a steady, continued slow-burn of infections in states with large populations. Even California and Texas — both states where cases had dropped off significantly in late summer — each continue to post more than 20,000 cases a week.

Hotez says models forecasting upward of 170,000 deaths in about the next four months — and Dr. Anthony Fauci’s warnings that the U.S. could eventually surpass 100,000 cases a day — may come to pass, given the current trajectory of the pandemic.

“I think that’s very real, and especially if we don’t have any kind of national containment strategy,” Hotez says. “The expectation is that cases will also accelerate across the country.”

Increasingly, the virus is sweeping through rural communities that had been spared earlier in the pandemic.

“We’ve really switched to the infections emerging in the last strongholds, which are rural areas of Iowa,” says Dr. Christine Petersen at the University of Iowa. “This is a kind of a pattern that’s consistent across at least the Midwest.”

Though many communities are eager to open up businesses and social events, they lack the tools to do so safely, says Adalja.

“The biggest issue is still the fact that many of these states don’t have the capacity to test, trace and isolate,” Adalja says, referring to the proven public health strategy that helps box in new infections before they can spread.

“It’s not necessarily about reopening,” Adalja says. “It’s about reopening with a plan and the public health infrastructure that’s going to be able to absorb the inevitable number of cases that you get.”