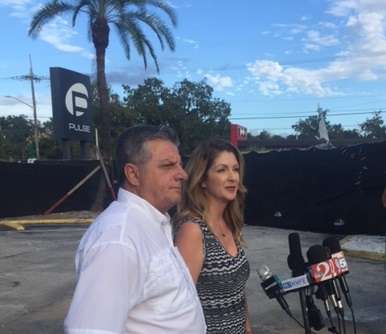 Barbara Poma (right) addresses reporters with her husband Rosario by her side. Photo by Catherine Welch.

Six months ago Monday a gunman opened fire at Pulse, leaving more than 100 dead or wounded in the worst mass shooting in modern American history.

The massacre put Orlando at the center of national debate about gun control, terrorism and xenophobia as mass attacks continue as an all-too-common occurrence.

90.7’s Amy Green talked with Pulse owner Barbara Poma in her first in-depth interview about the ordeal at the gay nightclub she established as a tribute to her brother, who died of AIDS.

Listen to the interview by clicking on the player above.