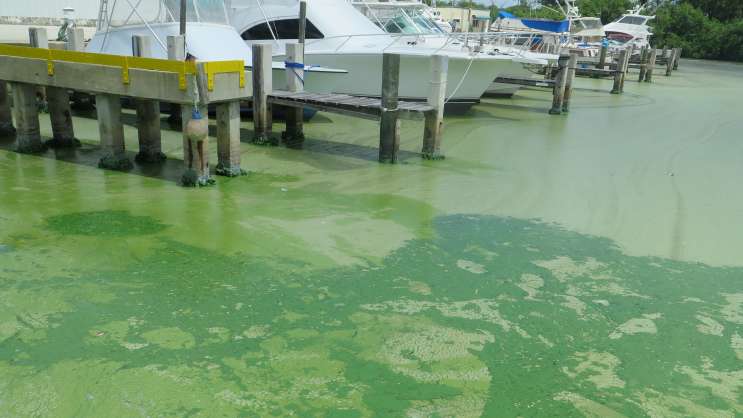 Summertime is a popular time to swim, boat and enjoy Florida’s waterways.

GREEN: Gov. Ron DeSantis is billing the Clean Waterways Act as, in his words, “one of the most significant pieces of substantive legislation in quite some time.” The measure is based on the recommendations of the state’s Blue Green Algae Task Force, appointed after toxic algae gripped Florida in 2018. Ryan Smart, what does the Clean Waterways Act do?

SMART: If you are living in an area where your primary pollution sources are from wastewater treatment, it is going to give you some relief. It also is going to do some things to help restoration down in southeast and southwest Florida, where the major problems there are related to wastewater treatment and discharges from local governments.

GREEN: Several environmental groups lobbied against the Clean Waterways Act. What does the measure not do?

SMART: Well, what the measure doesn’t do is anything for our waters north of Orlando. Wastewater is a very small percentage of the overall problem affecting our waters in Florida. The major culprit is agriculture. And the bill does not require agriculture to reduce even one pound of nitrogen across the state. So what it really does is it shifts the burden of making our water clean from those who are most responsible for polluting it to homeowners.

GREEN: What else should the Clean Waterways Act be doing?

SMART: There’s some very basic things, like these water quality plans don’t have to account for future growth. We know Florida’s growing by a thousand people a day. We know agriculture is growing. So what the legislature is doing is a dog-and-pony show, where they’re saying we’re going to go around the state and inspect to make sure all the farmers are doing best management practices. But the practices that they are inspecting, they’ve already acknowledged don’t work. What they needed to do — what was in the original bill — is they need to come up with best management practices that do work, and they need to require farmers to implement those practices in a timely manner. But we need significant state funding to help farmers do that. And that’s just the power that the agricultural lobby has in this situation. They have such a sweetheart deal right now that they have no reason to make any momentum to try to change anything.

GREEN: How do Florida’s waterways look this summer? And what’s the outlook for toxic algae?

SMART: Nothing’s changed. So it’s the same. It’s the same as it was. There’s a lot of factors that go into whether or not you get a big toxic algae bloom in any given year — not all of them completely related to water pollution. There’s a lot of effects. But you can look at the amount of nitrogen that’s going into our springs and rivers and look at the phosphorus, and you can see those things aren’t going down.

What that means is that when these other environmental conditions are right, you’re going to get those algae blooms again. It’s kind of a misnomer, that in summers we have an algae bloom things are bad and when we don’t have a big algae blooms things are good. The water is polluted either way. It’s just the bigger environmental circumstances that determine whether those things happen. So you know, in springs, we haven’t really seen them closed because of algae. But we have seen springs close for bacteria and other reasons that are, you know, all related to not properly dealing with water pollution.

GREEN: I’ve been speaking with Ryan Smart of the Florida Springs Council. Thanks so much for joining us.

SMART: Thanks, Amy. Have a good day.