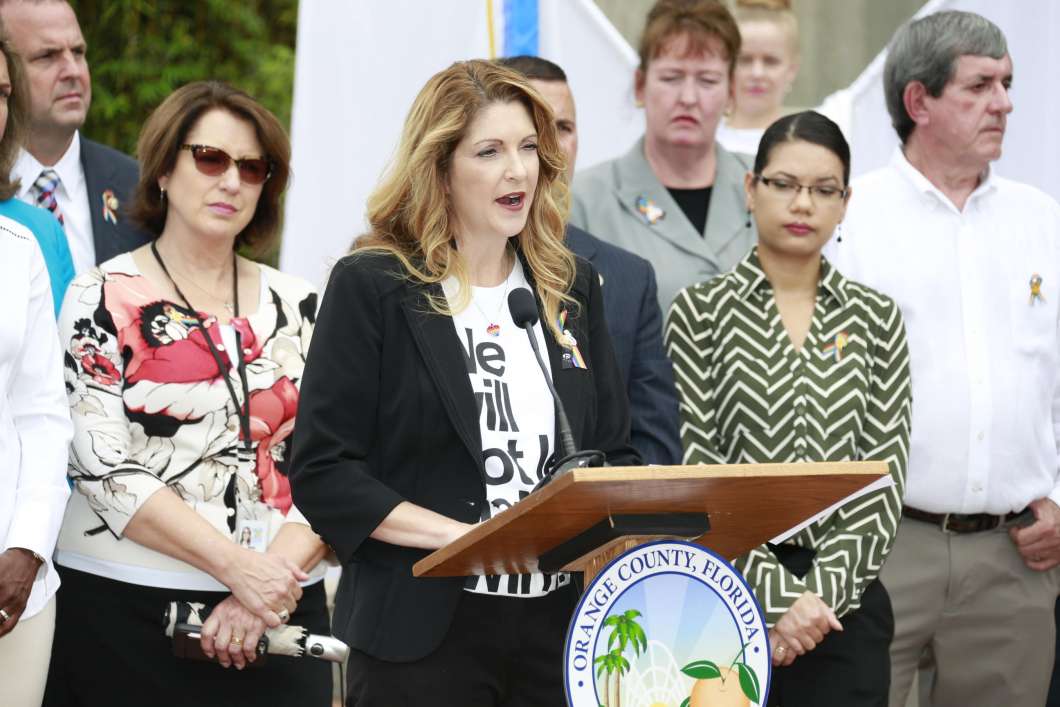 Pulse is silent this morning after ceremonies Monday that drew hundreds, a year after the deadliest mass shooting in modern American history.

NICOLE: Set the scene for us. What were these ceremonies like?

AMY: Sure. Well, there were three ceremonies beginning at 1 a.m., close to the time when a gunman opened fire killing 49 and wounding more than 50. That ceremony was closed to the public.

I was at a ceremony at midday, and certainly it was mournful. It took place inside the Pulse gates in the shadow of the building where this massacre took place. Beside the front door there were 49 heart-shaped wreaths of white flowers hanging in rows, each one labeled with a different name. Beneath the wreaths there were candles arranged almost like an alter.

We heard from Pulse owner Barbara Poma, who clearly was emotional.

“I miss Pulse. I miss everything it stood for. I miss serving the LGBTQ-plus community, our Latin community in a way only a gay bar can. I am grateful and comforted when I hear your memories, and I see your pictures of the best times of your lives. It breaks my heart that your sanctuary was taken from you. But I know we are resilient, and I know we will not let hate win.”

AMY: Absolutely. But you hear Poma talk about resilience. I would say the ceremony also was a celebration of love, resilience, diversity and unity.

We also heard from Orlando Mayor Buddy Dyer. He talked about what it was like to tell the people of his city a year ago how many were dead, saying it was the hardest thing he’s done in office. But he also talked very movingly about the slogan One Orlando, which is something that has just blossomed since the Pulse shooting. He talked about how the slogan stands for a place where diversity and inclusion are fundamental strengths.

“One Orlando can’t be static. It has to be a living ever-growing ideal. Over the last 12 months I’ve spoken publicly about Pulse, and I often borrow a line that I heard a week after Pulse. And that was from one of our local pastors, and he said, ‘Orlando has been anointed to show the world how to combat hate and evil and promote equality and embrace diversity.'”

NICOLE: Amy Green, what else did you see or hear yesterday at the Pulse ceremony?

AMY: The names of the dead were read. There were prayers in English and Spanish. And there was song. Here is the Orlando Gay Chorus.

I’ve been speaking with 90.7’s Amy Green. Thanks for joining us!