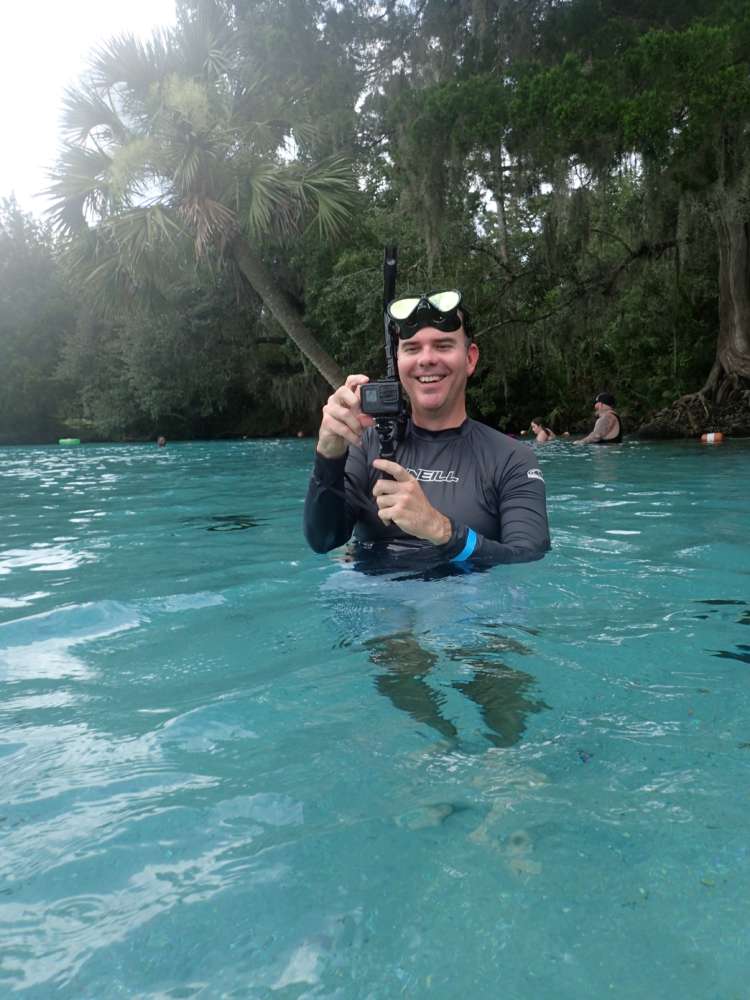 Oscar Corral's new documentary, Fellowship of the Springs, examines the growing fragility of one of Florida's most important water resources, its springs. Photo courtesy Oscar Corral

Florida’s springs are in crisis.

That’s the message of the new documentary, Fellowship of the Springs, which examines the growing fragility of the greatest concentration of freshwater springs in the world.

CORRAL: I think the first time anybody enters a spring, it’s kind of like a shock to the system. Because they’re colder than you’d expect from water in Florida. They’re 72 degrees year-round. So if you’re out there in the summer, and you jump into one of these springs, it’s a jolt to the system. And whatever post traumatic stress disorder is, it’s the opposite. I mean, you just feel this incredible rush of just great, great chemicals in your body releasing from this water that’s clean and clear and all around you.

GREEN: Florida springs primarily are in central and north Florida. How many springs are there, and why are there so many in Florida?

CORRAL: Florida, north Florida, has what’s known as a karst geology. So it enables all these springs to form in the northern part of the state. And there used to be springs south of Orlando, but because of development and drainage of the Everglades and other water systems there’s no more springs south of Orlando. So now all the springs are between Orlando and Pensacola, and Florida has approximately 1,000 artesian springs throughout the state. Of those, about 30 I think, 30 to 32, are first-magnitude. So they’re large springs that pump, you know, more than 65 million gallons of water a day out of the aquifer and pump it into rivers and lakes. And it’s unlike anything else in the world. Florida has the largest springs and the highest concentration of freshwater springs on Earth.

AMY: In the documentary Bob Knight of the Florida Springs Institute says the state’s springs are facing as he puts it, “imminent death.” The springs are experiencing nutrient pollution and harmful algae blooms. They’re over-tapped and running dry. You visited a few springs that already are dead and dying. What was that like?

CORRAL: I think a lot of policymakers would like to write off Dr. Bob Knight’s assessment that springs are facing imminent death. But it’s not until you actually go and visit dead springs that you realize that these springs are dying already. And there’s very little being done right now at the state level to try to prevent that. I think that the state is focused on permits for businesses to make money. And they don’t, they don’t really assess and consider the environmental consequences of their decisions. At this point, I think that basically the state is running a business free-for-all, where as long as somebody can present a way to make money pumping a lot of water, they’re going to approve the permit.

GREEN: Your documentary focuses on a group of advocates who are fighting to save Florida springs. For instance, the advocates have taken legal action against the state’s cleanup plans because they say the plans don’t go far enough. Where do these advocacy efforts stand now?

CORRAL: The advocates who are trying to fight for the future of the springs are still active. They’ve been defeated in some court cases and in some permitting cases, but they’re undaunted. And I think Amy, you know about this because you wrote about the Everglades and the Comprehensive Everglades Restoration Plan, and I think there’s a lot of parallels between the springs and the Everglades. And I think the the springs are right now where the Everglades were in the 1980s, where people understand that they’re being destroyed, that it’s a precious resource that needs to be saved. But there’s really been no leadership to step forward to really take action to make it happen.

GREEN: I’ve been speaking with Oscar Corral whose documentary, Fellowship of the Springs, is airing this summer on PBS stations statewide. Thanks for joining us.

CORRAL: Thank you, Amy. Nice to be with you.