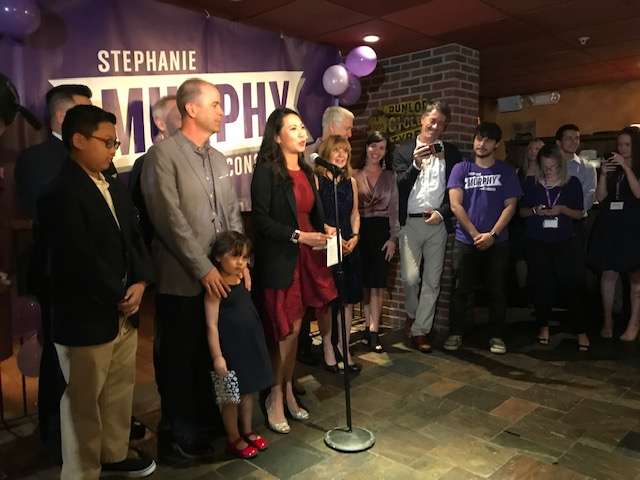 “My allegiance will always be to the people I represent, not to a particular party or president. But to the constitution of the United States.” Photo: Danielle Prieur

Murphy ran as a moderate Democrat on a platform of bipartisanship.

In her victory speech, Murphy said she would always put “country before politics.” She pointed to the Gun Research Violence Act that she authored as an example of bipartisanship in action.

“Certainly here in Florida,” Murphy said. “We have had too many lives lost to gun violence and I’m proud to say that I led the initiative to lift the 22 year ban on gun research.”

Shelly Lauten of the Central Florida Commission on Homelessness said this bipartisanship has allowed them to make strides in the affordable housing crisis.

“[Murphy] has been working with a bipartisan group on identifying the barriers to building more effective housing, under $3,500 or less,” Lauten said. “She understands the issues and knows how to reach across the aisle to get things done and that’s what we need to solve problems of homelessness.”

Murphy is a member of the Problem Solvers Caucus, a bipartisan initiative that attempts to find common ground on problems of national interest like healthcare. According to the Associated Press, she beat former Florida Representative Mike Miller with 57.7 percent of the vote.