Congressional Negotiators Have Failed To Reach A Deal On Police Reform 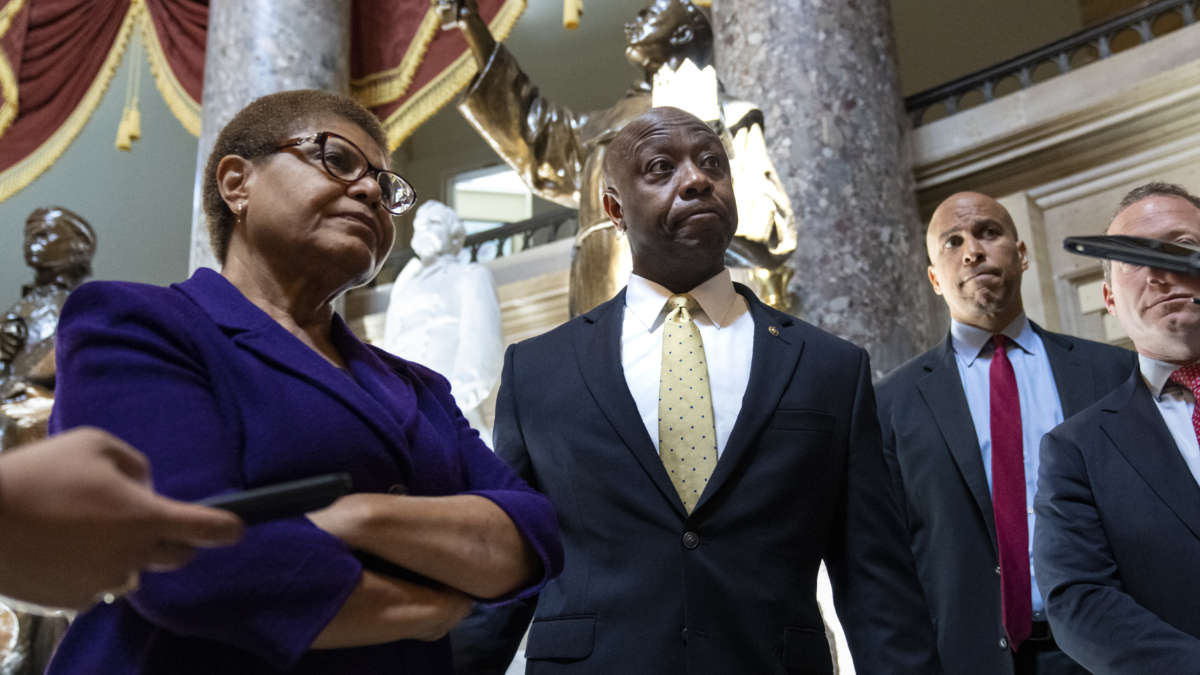 Months of bipartisan negotiations over policing reform legislation have ended with no agreement, according to the lawmakers who led the process.

New Jersey Sen. Cory Booker, a Democrat, told reporters that he had a conversation on Wednesday with Republican negotiator, Sen. Tim Scott of South Carolina, indicating that the talks were over.

The news was first reported by the Wall Street Journal.

After a Minneapolis jury found a white police officer who killed George Floyd guilty of murder in April, lawmakers in both parties had expressed cautious optimism that they could broker a deal. Lawmakers said they believed that the verdict would provide new momentum to reach a compromise.

But the negotiators, which included Booker, Scott and Democratic Rep. Karen Bass of California, were unable to reach an agreement on a number of issues, including how to address the legal doctrine known as “qualified immunity,” which shields police officers from civil lawsuits.

Booker said that negotiators were able to pull off some “pretty big accomplishments,” but that it was “clear that we were not making the progress that we needed to make.”

In a statement, Bass said that Democrats “accepted significant compromises, knowing that they would be a tough sell to our community,” but added that “every time, more was demanded to the point that there would be no progress made in the bill that we were left discussing.”

She said that policing overhaul legislation now requires a “re-engagement of the legislative process.”

“Crime will continue to increase while safety decreases, and more officers are going to walk away from the force because my negotiating partners walked away from the table,” Scott said.

While some activists have called for slashing funding for police departments or disbanding them entirely, that notion has not found widespread support among Congressional Democrats.

President Biden had initially called on lawmakers to reach a compromise by the first anniversary of the murder of George Floyd. But that May 25 deadline came and went without any breakthrough.

Biden said in a statement on Wednesday that he still hopes to sign a “comprehensive and meaningful police reform bill” into law, because legislation is necessary for “lasting and meaningful change.”

“But this moment demands action, and we cannot allow those who stand in the way of progress to prevent us from answering the call,” he added.

Biden said that in the coming weeks the White House would engage with key groups, including law enforcement and civil rights leaders, to discuss “a path forward.”

Biden said that those discussions would include “potential executive actions,” but did not detail what those might include.

Civil rights leaders and policing reform advocates on Wednesday expressed their frustration that talks had broken down with no agreement, despite months of work.

“In a year unlike any other, when the American people spoke up, marched, and demanded reforms in policing, law enforcement unions and partisan politicians chose to stand on the wrong side of history,” said Derrick Johnson, the president of the NAACP. “They have chosen to stand with those who have lynched the very people they are meant to protect and serve.”

Johnson called it “disheartening that there is a lack of courage and bravery to bring about true reform.”

The Rev. Al Sharpton called the lack of an agreement “appalling and unacceptable.”

“To have a weak bill would make a mockery of the murder of Floyd and those of us that fought for his family,” he added.

The House passed its own policing reform bill, the George Floyd Justice in Policing Act in February, with almost exclusively Democratic votes.

That legislation sought to prohibit racial profiling by police, ban the use of chokeholds and no-knock warrants, and make it easier for police officers to be criminally charged for civil rights violations, among other things. It also would have allowed victims of misconduct to sue officers. But that legislation faced steep Republican opposition in the Senate.