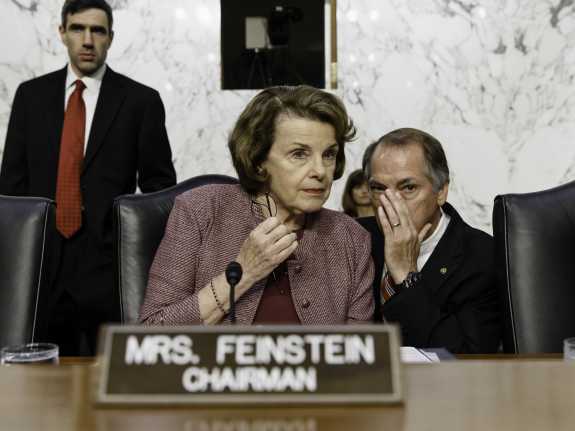 Leaders on Capitol Hill are at odds regarding a report on CIA methods — including torture — used to extract information in the so-called “war on terror.”

Chairwoman of the Senate Intelligence Committee Senator Dianne Feinstein (D-Calif.) has been fighting for the release of her 480-page executive summary of the report since April of this year, and it finally was scheduled for a reveal this week.

But Secretary of State John Kerry called Feinstein on Friday on behalf of the White House, asking for a delay.

The reason for the request is a general fear from both sides of the political aisle that details in the report will put American personnel in danger overseas and incite further violence from extremists.

Feinstein’s counterpart in the House, intelligence committee chairman Rep. Mike Rogers (R-Mich.), appeared on CNN’s State of the Union on Sunday to express his concerns about the release.

Feinstein gave her own interview to The Los Angeles Times, published Sunday. The article pointed out that Kerry’s phone call presented a unique struggle as Washington prepares for a change in political leadership and Sen. Richard Burr (R-N.C.) takes over Feinstein’s job.

“The request put Feinstein in an agonizingly difficult position — delay the release and run the risk that Burr and the Republicans will block the report after they take over in January, or go ahead and take the blame if Americans in foreign countries are harmed.”

Still, Feinstein defended her position in the interview.

“We have to get this report out,” she said. “Anybody who reads this is going to never let this happen again.”

NPR’s Mara Liasson spoke with host Rachel Martin on Weekend Edition Sunday about the Obama Administration’s view of the release.

“The administration supports releasing the report. And the State Department says Kerry told Feinstein that the timing of the release was her choice. But the administration is concerned about how the report would affect ongoing efforts against ISIS, the Islamic State terrorist group, and the safety of Americans who are being held hostage around the world. And it wants those issues to be taken into account.”

Feinstein has a number of supporters in her corner when it comes to releasing the report this week. Martin and Liasson discussed Sen. Mark Udall (D-Colo.) — who lost his bid for reelection in November — threatening to read the report on the Senate floor. And Sanders also reported that several Democrats worry time is running out to release it, since the Republicans will soon gain control of Congress.

Amnesty International released a statement Friday calling for delivery of the report.

“The US government’s international legal obligations on truth, accountability and remedy demand that any information that pertains to human rights violations, including the crimes under international law of torture and enforced disappearance, be made public. The United Nations, among others, has formally recognized the importance of respecting and ensuring the right to the truth so as to contribute to ending impunity and to promote and protect human rights.”

Jose A. Rodriguez Jr., who was appointed chief of staff of the National Counterterrorism Center for the Bush Administration following the Sept. 11 attacks, defended the CIA interrogation program in Friday’s edition of The Washington Post.

“In the wake of the Sept. 11, 2001, attacks, lawmakers urged us to do everything possible to prevent another attack on our soil. Members of Congress and the administration were nearly unanimous in their desire that the CIA do all that it could to debilitate and destroy al-Qaeda. The CIA got the necessary approvals to do so and kept Congress briefed throughout. But as our successes grew, some lawmakers’ recollections shrank in regard to the support they once offered.”

“What we can’t know, what we’ll never know, is whether those were the only ways to elicit that information.”

Feinstein says her report can answer that question.